A general store that offers so much more 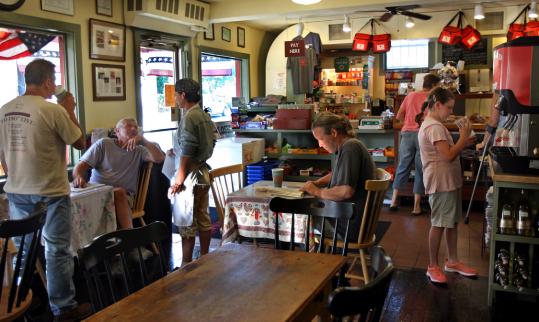 PROVINCETOWN - As with other vacation towns, the rule for dining out here is to avoid any spot that's overpriced and underwhelming. When you discover the exceptions, you eat there two and three times a week until you must return home, arms full to bursting with buttermilk cinnamon rolls and raspberry cheese croissants for the road.

Far Land Provisions is one such place, a gem one block off P-town's well-beaten and congested Commercial Street. This bakery-breakfast joint is also a takeout place, and you can get groceries, too. It's often bustling, yet there's always a seat at a cheery cluster of tables draped with mismatched vintage tablecloths. Or go out on the deep front porch and sit awhile in one of the rocking chairs (and maybe next to a patient dog awaiting its breakfasting owner).

You might think this is any other general store, with candies and lighters cluttering the cash registers, a small selection of produce, six packs of beer, tiny jars of peanut butter, coffee to go. But the first thing that seems special is a tiny sign above a glass case full of pastries, which declares that all the goodies are homemade everyday by Tricia Collins and Susan Hale.

They are often still hot from the oven and heaped in beautiful piles. Buttermilk cinnamon rolls aren't sticky, but rather biscuit-like with a soft sugary glaze. Coffee is roasted in nearby Wellfleet by Beanstock Coffee Roasters.

Jim Farley and Tom Boland opened Far Land Provisions five years ago (the name is a contraction of their surnames, and only coincidentally conjures images of Provincetown as it appears on maps at the far end of the state). The couple had worked in nursing and historic preservation, respectively, but wanted to be able to stay in Provincetown year-round. When they bought the store, they had some ideas of what it should be. "We wanted it to retain the general store feeling, but to walk a line between comfort food and high-end food," says Boland. In addition to staples like lettuce and bread, there are also sandwiches (try the Italian sub) and takeout dinners, salads, and sides.

The entrepreneurs say that buying the store has been the hardest thing they've ever done. But it's also been the most rewarding, as it grows and succeeds, and they see repeat customers year after year. Breakfast is very busy, in part because the cooks have taken the humble breakfast sandwich to a whole new level. You can order two fried eggs layered with melted cheese on a lightly toasted bagel, English muffin, slice of toast, or croissant.

Far Land is one of the few Provincetown businesses that stays open through the winter. The seasons change, but the food doesn't. And when summer is over, after the town thins out, the little place offers a beacon of light in the chilly months.