Celebrated on the square 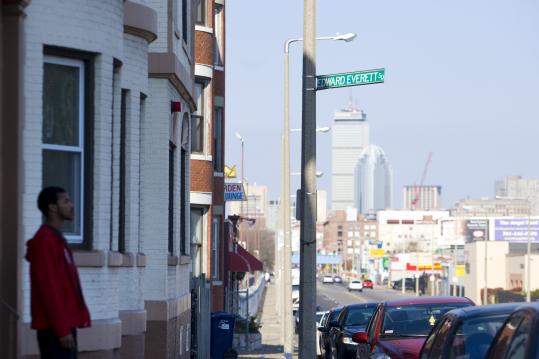 They’re sprouting locally, small yet official-looking signs that proclaim an otherwise anonymous intersection is the Thomas F. Coughlin, or Wilfred “Freddie’’ Suozzo, or Edward Everett square. “Who are they?’’ you might ask. We toured them and others to find out.

Cambridge seems to have more squares than nearby towns, with some intersections accommodating two squares and one corner. The one thing they all have in common is that they commemorate someone who made a difference to the community, no matter how small. Behind every name is a story, whether it’s that of a governor or a grocer. The next time you’re wondering about a square’s namesake, ask a local merchant or neighborhood resident and you might hear a surprising tale.

Suozzo was in the taxi business for over 40 years, so it’s no coincidence that the white sign honoring his memory is planted in front of Ambassador Brattle Cab. “He passed away about 10 years ago,’’ said Tony Guariglia, a Cambridge native who has worked for the company “off and on’’ for decades. “There’s a lot of these signs around, usually named for a local. They’re put up as a sign of respect. In this case, we work here.’’

Named for the city’s four-time mayor, Vellucci Square is in front of the Dante Alighieri Society of Italian Culture, an organization Vellucci once served as a governor. Known as a colorful spokesman for Cambridge’s working class, Vellucci died in 2002 at 87. “He was one of the last grass-roots politicians,’’ said Guariglia. “If you wanted something done, people said, ‘Go see Al V.’ ’’ Not to confuse things, but you’ll find a granite bust of “Al V.’’ in Inman Square, too.

“Baby, Stop Your Crying,’’ reads a plaque in the 1369 Coffeehouse in memory of Love, a Cambridge-born musician, roller-skating street person, self-appointed policeman, and periodically homeless man who was a fixture along this stretch of Mass. Ave. “He was a beautiful man with a huge ego,’’ said Gerry Wolf, co-owner of the coffeehouse. Love’s square is adjacent to the establishment where he sometimes stored his possessions. “He adopted us and we adopted him,’’ said Wolf. “He would change clothes five times a day, and wore the most wild costumes - feather boas and boots laced up to his knees. He was a flirt with the ladies. This is the most colorful man any square was named after.’’

Cook, an R&B do-wop singer, belted out his signature song, “Peanuts,’’ at the Cantab Lounge for over 30 years. “He was the pillar of entertainment here and a stepping stone for the Cantab doing live music seven nights a week,’’ said Stephen Ramsey, manager and bartender. Cook, who will be 90 next month, still shows up for an occasional guest appearance. “After three heart attacks and two mild strokes he’s still going strong,’’ said Ramsey, who met his wife at the bar 30 years ago. “Joe is responsible for a lot of marriages here. I’m still glad he comes to visit once in a while.’’

Mark Sandman Square Mass. Ave. and Brookline Street, Cambridge A musician and songwriter best known as the bassist and lead singer of the indie rock band Morphine, Sandman is memorialized outside the Middle East, a restaurant and club he frequented. Per forming with his band in Italy, in 1999, Sandman collapsed onstage and passed away from a heart attack at 46. Shortly after that, the memorial was erected. “Mark used to hang out here all the time,’’ said Joseph Sater, owner of the Middle East. “His was one of the first bands to play at the Central Square World’s Fair. God bless his soul.’’

The small squares of Somerville are most often named for veterans. Located outside VFW Post 529, this square honors three Medal of Honor recipients: George Dilboy, an Army private first class in World War I; George Levick Street III, a Navy commander in World War II; and Thomas G. Kelley, a Navy captain in the Vietnam War.

VFW Post 529 will be 90 years old next year, and is named for Dilboy. “I had a thought one day, that it would be nice to have something else in memory of him,’’ said Bob Hardy Jr., post commander. “Dilboy wasn’t an American citizen. He was a Greek immigrant who joined the military during the war. There’s also a football stadium named after him, over on Route 16.’’

This small square in the heart of Inman Square is named for Coughlin, who ran an insurance business here for over 50 years. Donna Coughlin Lyons, his niece who works at the agency’s current location, has a decree from the city when the square was dedicated in 1997, “in recognition of the life of this native Cambridge son.’’

“A lot of the people who are memorialized were first- or second-generation immigrants who came to Cambridge and stayed in Cambridge,’’ said Lyons. “They often were people who gave something back to the community.’’ Lyons, who grew up in North Cambridge, describes her childhood as a time when everyone knew everyone. “If you didn’t know a person, you’d know someone in their family.’’

Named after a congressman and Massachusetts governor, this busy intersection has more recently become known for its large bronze pear sculpture. At the New Market Farm Stand, there was some confusion among patrons as to who Everett was. “I think he was a farmer,’’ was one guess. “He imported pears,’’ was another.

In fact, the pear and the man have separate histories. The Dorchester Clapp pear was first grown here in the 1840s. Across the street from the sculpture, a bronze plaque details the history of Everett, born in 1745 in a house on the site (since demolished). There’s plenty of new signage that identifies the tangle of street names; however, the sign marking the spot Edward Everett Square seems to have disappeared in the upgrade.

Alice Karagozian is a lively 82-year-old who lives beside the square dedicated to her parents. “My dad was a schoolteacher in Armenia,’’ said Karagozian. “He married my mother in Greece, and they came here to escape the genocide. I was born here.’’

The Karagozians purchased two buildings across the street from one another. One was a small grocery store, opened in 1927. They leased the other, which operated as a drugstore for four decades (and now is home to 20th Century Provenance).

“In World War II, the grocery store was a center of activity,’’ said Karagozian. “Soldiers of families we knew wrote letters to my parents. We sent them packages filled with cookies.’’ A neighbor told Mayor Ken Reeves about the family, and he facilitated the square’s dedication. “I was so pleased it happened.’’

Theater director, puppeteer, writer, and educator, Stackman is memorialized along Memorial Drive across from the banks of the Charles River. The location is apt, as Stackman was the technical director for the Cambridge River Festival while working for the Cambridge Arts Council. A 2007 online obituary refers to Stackman as, “a tireless advocate for good work under Spartan conditions in obscure venues.’’

Necee Regis can be reached at nregis@gis.net.