THIS STORY HAS BEEN FORMATTED FOR EASY PRINTING
Georges Island

Peace and play on a war footing

Explore Fort Warren, fly a kite, or focus on the far skyline 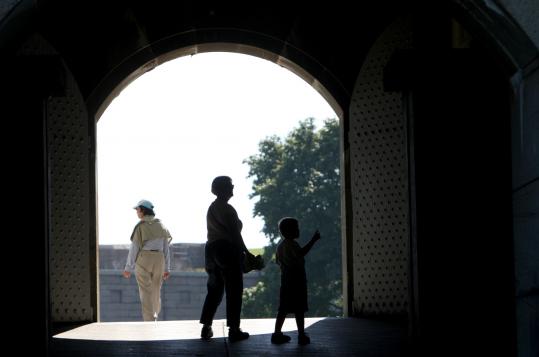 As the sun slowly sinks toward the Boston skyline and shadows grow long, the throngs who had descended on Fort Warren recede like the outgoing tide.

Soon, you may be all alone inside this impressive citadel in the middle of Boston Harbor. The hallways start to fade in the gloaming. The wind begins to howl, and the floors creak. The startling flap of a pigeon’s wings reverberates through the empty chambers, and a shiver runs down your spine as you catch a glimpse of something - or someone - from the corner of your eye.

It’s moments such as these that make it easy to see how Georges Island’s mighty star-shaped garrison, the most popular attraction in the Boston Harbor Islands national park area, has given rise to legends and ghost stories.

Fort Warren took decades to build, and constant delays plagued the massive project - not an entirely unfamiliar saga to present-day Bostonians. Begun in 1833, it took so long to complete that by the time the Civil War began, it still wasn’t fully functional, and its defensive design was virtually obsolete.

Luckily, Fort Warren never faced enemy attack, and its most noted role was as a prison for hundreds of Confederate soldiers during the war. Among the prominent rebels confined within its walls were James M. Mason and John Slidell, the envoys involved in the Trent Affair (they were removed by the Navy from the Trent, a British merchant vessel headed for England, where the two envoys hoped to win European support for the Confederacy), and Alexander Hamilton Stephens, vice president of the Confederacy. Another claim to fame is that Union soldiers stationed at Fort Warren were credited with composing the lyrics to the famous marching song “John Brown’s Body.’’

Fortress visitors can take ranger-led guided tours or wander on their own. The former mine storage building next to Georges Island’s dock is being renovated to house a new visitors center featuring interactive exhibits, a gift shop, and a full-service food concession with sheltered seating. Until it opens next year, the island has temporary bathrooms and concessions.

A pathway from the dock leads past the fort’s guardhouse and underneath a tunnel in the cover face. A wooden bridge crosses a dry moat, and visitors enter through the fort’s original oak doors in the sally port to the expansive parade ground that once provided space for infantry training and inspections as well as off-duty activities such as baseball games. A triangular granite powder magazine is the only permanent building on the parade ground.

Even on sweltering summer days, a trip inside the fort’s thick walls built from Quincy and Cape Ann granite provides a cool respite. The ground-level bastions have been stripped bare of all furnishings and decorations, but the interplay of the dramatic arches, spiral staircases, and vaulted roofs that remain are a geometric sight to behold and a photographer’s delight.

Fort Warren’s observation towers and sod-covered ramparts offer refreshing zephyrs and great views of Boston and the neighboring islands. The concrete batteries that once housed massive guns remain atop the ramparts with tiered emplacements as large as Greek amphitheaters.

Children fascinated by forts and prisons can pose like an inmate behind the black iron bars of the guardhouse, listen to their voices echo through the empty corridors, and explore the labyrinth of dimly lighted passageways. Just keep an eye on the kids as they probe the fort’s nooks and crannies because some areas have steep drop-offs and hidden hazards.

While Fort Warren dominates the landscape, the appeal of Georges Island isn’t limited to history buffs. The island’s spacious picnic grounds, harbor vistas, and gravel beach also lure many who make the 30-minute ferry ride from Boston’s Long Wharf. Visitors just need to watch for goose droppings that in some spots require as careful a negotiation as the underwater minefields that were operated from Fort Warren during the two world wars.

The onset of the atomic age rendered Fort Warren militarily useless, and it was abandoned after World War II. Thanks in large part to the vigorous efforts of the late historian and master storyteller Edward Rowe Snow, plans to develop the island for commercial purposes or use it as a toxic waste dump were thwarted. Today, a memorial to Snow graces the island he helped to preserve, and a shade shelter with picnic tables bears his name.

No one who followed Snow on his tours through Fort Warren will forget his haunting tale of the Lady in Black. According to the legend, the newlywed wife of a Confederate prisoner, dressed as a man and brandishing a pistol, snuck into the fort in an attempt to free her husband. While she successfully reached her husband’s cell, Union troops discovered their scheme as they tried to escape. The wife fired her gun at the commanding officer, but it misfired, killing her husband instead.

The woman was ordered to die for her treachery, and her last request was to be properly dressed in women’s clothing for her execution. The best the Union officers could do was to give her some black robes, in which she was hanged from the gallows. As far back as January 1862, there were reports of soldiers seeing spiritual phenomenon on their midnight rounds, and the Lady in Black is said to still prowl the fort to this day.

Along with being on the lookout for the Lady in Black, visitors to Georges Island next Saturday will be able to look out to the harbor and see a flotilla of sailboats as the Boston Harbor Island Alliance hosts the fifth annual Boston Harbor Islands Regatta. It’s just one of the many public programs - such as Civil War reenactments, old-time baseball games, and performances by the Boston Children’s Theatre - sponsored by the organization throughout the year.

More than 100 boats will compete in the 12-mile pursuit race on a figure-eight course amid the islands with Georges Island at its focal point. (Pursuit racing awards handicaps up front so boats start at different times and compete to cross the finish line first.) The regatta is not just a boat race but an outdoor festival that includes fishing clinics and nautical flag-making for kids.

Georges Island’s ramparts and shell-strewn beaches will offer unparalleled panoramas of colorful, billowing sails unfurled under the blinking eye of Boston Light. “It’s rare to have this race configuration and such a great vantage point for spectators right in the middle of the race course,’’ says Bob Johnstone, race director.

Spectators viewing the races from the ramparts of Fort Warren will follow in the footsteps of Bostonians of yore who used to stroll atop the fort while it was being built in the 1850s and watch the sailboats breezing through the harbor. It’s the same vantage point that was once shared by Union soldiers humming “John Brown’s Body’’ and Confederate soldiers gazing south and yearning for home.

And if the cool September breezes blowing over Georges Island don’t give you a mild shiver, then the breath of a certain feminine spirit surely will.

Ferries to Georges Island leave from Long Wharf in Boston and run daily through Oct. 12. Adults $14, seniors $10, children over age 3 $8 for round-trip ticket; a family four-pack $39. Visit bostonharborislands.org for ferry schedules and a listing of public programs.

Private boaters may use the dock at Georges Island on a first-come, first-served basis.