It's hard to imagine that John F. Kennedy, the epitome of endless youth, would have turned 92 this Friday. Forty-five years after his passing, memories of JFK still burn brightly, and Boston's native son remains one of the country's most beloved presidents. As another eloquent commander-in-chief and his young family evoke comparisons to the Kennedys, anyone wanting to relive the days of Camelot can still find plenty of JFK's old haunts around his hometown.

Kennedy's path to the White House started from a green clapboard house with yellow trim. The 35th president was born in a modest home on a quiet, tree-lined Brookline street on the afternoon of May 29, 1917. Visitors to the John F. Kennedy National Historic Site can walk through his boyhood home and view a short movie about the Kennedy family. The house has been restored to its 1917 appearance, right down to JFK's bassinet in the nursery, the crock of baked beans atop the kitchen range, and the miniature chairs and table in the dining room where Joseph Jr. and John ate before graduating to the grown-ups' table. Pick up a brochure with a self-guided walking tour of the Coolidge Corner neighborhood that includes other Kennedy-related sights, such as the former St. Aidan's Church where JFK was baptized and served as an altar boy. The more spacious home at the corner of Naples and Abbotsford roads, where the Kennedys moved in 1920, was the birthplace of Eunice, Patricia, and Robert. 83 Beals St., Brookline, 617-566-7937, www.nps.gov/jofi, open through Sept. 27.

A trip to the John F. Kennedy Presidential Library & Museum begins with an 18-minute introductory film, told in Kennedy's words, that covers his career up to his nomination at the 1960 Democratic National Convention in Los Angeles. Visitors then wander through exhibits encompassing the campaign and the defining moments of the Kennedy presidency. A re-creation of Kennedy's Oval Office includes his personal effects, such as his rocking chair, ship models, and the coconut shell on which he carved a distress message after the sinking of his PT-109 in World War II. In a stark black hallway, haunting drumbeats and television coverage of Kennedy's assassination on Nov. 22, 1963, play on a continuous loop and leave a lump in the throat even of those who weren't alive for that tragic day in Dallas. Columbia Point, Boston, 617-514-1600, www.jfklibrary.org.

At the other end of the Red Line from the museum is Kennedy's alma mater, Harvard University. Although his grades were seldom higher than a C in his first two years, Kennedy improved his performance enough to graduate cum laude. As a freshman, JFK lived behind Harvard Yard's wrought iron gates in Weld Hall before spending his remaining years in Winthrop House along the banks of the Charles River. Today, Harvard reserves his dorm room for the use of visiting dignitaries, particularly political notables who visit the School of Government, which bears Kennedy's name. The park adjacent to the Kennedy School features a fountain and pillars that contain inscriptions from his most notable speeches.

According to lore, a 6-year-old John Fitzgerald Kennedy gave his first political speech at the Parker House Hotel during a fete celebrating his maternal grandfather, John "Honey Fitz" Fitzgerald, the former congressman and two-time mayor of Boston. Kennedy told the crowd, "This is the best grandfather a child ever had." The crowd ate it up like the hotel's signature rolls, and a master orator was born. Kennedy announced his 1946 candidacy for Congress at the hotel, and his bachelor party was held in the dark-paneled Press Room. According to some accounts, he also proposed to Jacqueline Bouvier at the hotel. The Last Hurrah restaurant on the ground floor features a JFK Lobster Roll and a Jackie O sandwich made with roasted portobello, red pepper, and brie. 60 School St., Boston, 617-227-8600, www.omnihotels.com.

Locke-Ober, the traditional lair of Boston's power brokers, was also a favorite dining spot of Kennedy's. The dark mahogany interior, plate-glass mirrors, and ornate brass fixtures exude a timeless Brahmin air. Dinners at Locke-Ober weren't just social occasions for JFK. While plotting his run for the presidency, he often had policy discussions with Harvard intellectuals in one of the private rooms on the third floor. The lobster stew and one of the private rooms are named in Kennedy's honor. 3 Winter Place, Boston, 617-542-1340, www.lockeober.com.

Eleven days before delivering his memorable inaugural address in January 1961, the president-elect delivered another eloquent oration, his "city upon a hill" speech, to the Legislature at the Massachusetts State House. Although he never served underneath the golden dome, a bronze statue of Kennedy, full of vigor and hair perfectly coiffed, stands outside the State House's west wing. The youthful JFK looks as though he is ready to bound down the steps and stride confidently to a new frontier. Because of security regulations, the Beacon Street sidewalk is as close as visitors can get to the statue. 24 Beacon St., Boston, 617-727-3676.

When Kennedy decided in 1946 to run for the congressional seat once held by his grandfather, he moved to Boston and rented a two-room suite in the old Hotel Bellevue, down the hall from Honey Fitz. The building at 21 Beacon St. is now private housing, but the hotel name remains engraved above the doorway and detailed stonework and ornate iron balconies adorn the exterior. Around the corner, between a coffee shop and a barber, is the entrance to 122 Bowdoin St., which was Kennedy's registered voting address when he served in Congress and even when he resided at 1600 Pennsylvania Ave. On a chilly Election Day morning in 1960, Jack and Jackie cast their ballots in the basement of the West End Branch of the Boston Public Library, which today is the Old West Church at 131 Cambridge St.

Whenever he had the chance, JFK enjoyed trekking up the stairs of the Union Oyster House and settling into booth 18 in the dimly lighted dining room. Surrounded by oil paintings of mighty clipper ships, he pored through the Sunday newspapers as he savored a bowl of lobster stew. Today, a framed American flag and a small plaque above the tabletop's bowl of oyster crackers note that the high-backed booth was Kennedy's favorite. 41 Union St., Boston, 617-227-2750, www.unionoysterhouse.com.

The Rose Fitzgerald Kennedy Greenway, the ribbon of parkland healing the scar left behind from the Big Dig, is dedicated to the memory of Kennedy's mother, Rose, the family matriarch. In a bit of irony, the greenway supplanted the elevated highway that was named in honor of her father. The plaque that once graced the John F. Fitzgerald Expressway, which includes a depiction of Honey Fitz, has found a new home at the corner of Cross and North streets on the edge of the North End neighborhood where Rose grew up. The historical marker mounted between the broken windows and peeling paint of the doorways of nearby 4 Garden Court is the only clue that Rose was born at the site.

Even though the North End has been transformed from a heavily Irish neighborhood into a predominantly Italian one, photographs of the Kennedys still hang next to portraits of Rocky Marciano and Italian World Cup teams in Hanover Street storefronts. St. Stephen's Church, in the shadow of the famous steeple of the Old North Church, is where Rose Kennedy was baptized in 1890 and where her funeral Mass was held in 1995. A plaque outside features her quote: "The most important element in human life is faith." 401 Hanover St., Boston, 617-523-1230.

The political memorabilia lining the walls of Doyle's Cafe, Boston's premier political watering hole, include an oil painting of Jack and Bobby Kennedy and a paper ballot from one of JFK's congressional runs. The dining room dedicated to Honey Fitz features plenty of family photos as well. There's no better place in Boston than this Irish pub to raise a toast to the city's most famous descendant of the Emerald Isle. 3484 Washington St., Jamaica Plain, 617-524-2345, www.doyles-cafe.com. 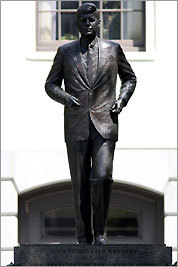 (Jonathan Wiggs/Globe Staff) Isabel McIlvain's 1990 bronze statue of President Kennedy on the steps at the State House was paid for by private citizens.