Wall-to-wall, all around the city 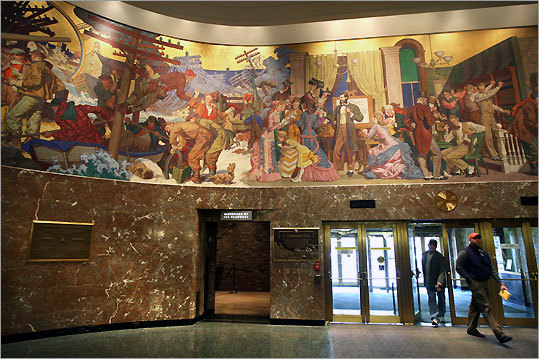 You can get started looking at notable New England wall paintings close to home. Pop over to the Arthur M. Sackler Museum, part of the Harvard Art Museum in Cambridge, to see the Sol LeWitt wall drawing that animates the Sackler's soaring lobby. By his arrangement of colorful trapezoids, LeWitt brought the equivalent of stained glass into the cathedral of art.

A stroll through the Massachusetts State House, particularly Nurses Hall and the Hall of Flags, is like a walk through an illustrated storybook of Bay State history. Murals include Henry Walker's 1903 depiction of "Pilgrims on the Mayflower" and Robert Reid's 1904 rendering of Paul Revere's ride.

The celebration of American workers wasn't limited to WPA murals. Ace illustrator Dean Cornwell executed his monumental "Telephone Men and Women at Work" mural in 1951 in what was then a New England Telephone building at 185 Franklin St. The 190-foot mural circling the lobby includes 197 life-size portraits in a narration of telephone history from Alexander Graham Bell's 1875 invention to linemen on the poles in post-World War II America.

Boston's most famous murals, however, were commissioned as fine art. The walls of the McKim building of the Boston Public Library are lined with mural riches, from the allegorical paintings of Pierre Puvis de Chavannes on the stairwells to the Arthurian legends recounted by Edwin Austin Abbey in his "Quest for the Holy Grail" cycle in the book delivery room. Climb to the third floor for John Singer Sargent's mural series on world religions.

Sargent reached his mural-painting apotheosis, however, with his work for the rotunda of the Museum of Fine Arts. From 1916-25, he executed 20 panels, 18 reliefs, and a slew of architectural ornaments. He celebrated the then-new building's classical design by drawing on Greek myth to glorify the arts and honor the power of knowledge and the imagination. The first work of art visible when climbing the staircase is none other than the goddess Athena shielding poor Sculpture, Painting, and Architecture from the threat of Time. She might well be saying, "Welcome to the temple of art."