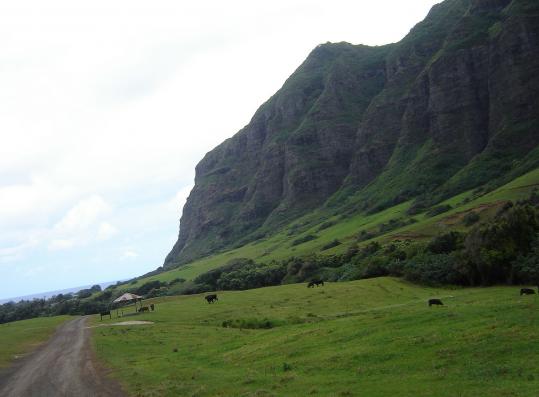 OAHU, Hawaii — Long revered by the ancient Hawaiians as one of Oahu’s most sacred places, the land now occupied by the Kualoa Ranch has had its share of reincarnations. In 1850, Gerrit P. Judd purchased the land from King Kamehameha III to open a sugar mill and cattle ranch. In the 1970s, ranch owners John and Dave Morgan began leading tours on horseback through the mountains.

Now, the 4,000-acre expanse maintains its cattle ranch status while serving as a backdrop for TV shows and movies. When the valley isn’t closed for filming, the ranch hosts tours and expeditions through the property, the most popular of which is the movie tour.

Our guide, an enthusiastic Hawaiian who calls himself “Cowboy,’’ drives us in a school bus along a cliff overlooking the ocean to a concrete bunker tucked into the side of the mountain. It was used by the Army in World War II and during season four of ABC’s “Lost.’’ Twelve concrete bunkers like this one litter the ranch, but “The Battery Cooper,’’ as it’s called, has all the allure. When it’s not in use by Hollywood, the bunker serves as a mini museum, paying homage to movies like “Pearl Harbor,’’ “Windtalkers,’’ and “Tears of the Sun,’’ all filmed here.

As we turn into the valley, a landscape of rolling hills opens before us. This is where the children in “Jurassic Park’’ took cover behind a fallen tree and where Hurley drove the Dharma van in “Lost.’’ No wonder movies like “Godzilla’’ and “Mighty Joe Young’’ have filmed here. Years of storm runoff have cut deep grooves into the sides of the mountains. During periods of heavy rain, these channels gush with waterfalls that release into the valley. This lush vista is the epitome of tropical paradise. And as more productions use the location — “Hawaii 5-0’’ currently films here — its star power will continue to grow.