Below the Western Wall, passage to a cherished history 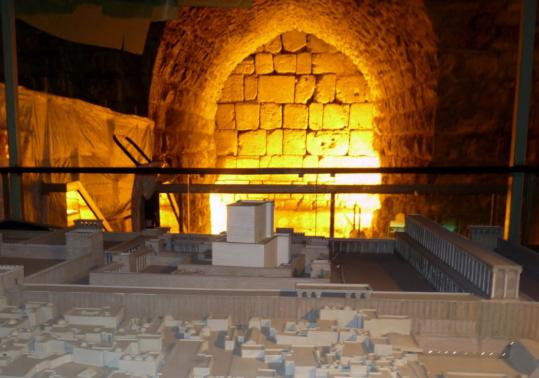 A mockup of the Temple Mount in the tunnels along the excavated portion of the Western Wall. (David Abel/Globe Staff)
By David Abel Globe Staff / February 13, 2011

JERUSALEM — The giant slabs of limestone, which have remained standing for two millennia despite repeated efforts to demolish them, make up the most sacred structure in the world for Jews, the ancient wall that once protected the Temple Mount.

Since at least the time when Roman legions destroyed the Second Temple in 70 AD, the Western Wall, also known as the Wailing Wall, has been a source of longing and lament for Jews around the world, a focal point for their bygone glory and their yearning for a new unity in a Third Temple.

The area around the wall — or Kotel, in Hebrew — had been off-limits to Jews for many years before Israel seized the Old City in Jerusalem from Jordan during the Six-Day War in 1967. Since then, it has attracted Jews from around the world who come here to pray, leave notes for God, or celebrate a bar mitzvah or wedding.

Over these intervening years, Israeli archeologists have excavated the area and found that the wall — which is considered holy because it is as close to the most sacred chamber of the First and Second Temples as Jews can worship — is just a small portion of what amounts to a 1,600-foot-long retaining wall that was hidden underground as succeeding generations built over it.

The painstaking work of exploring the underworld along the hidden portion of the Western Wall has led to perhaps the most interesting and controversial tour in Jerusalem, one that has to be made by appointment.

In 1996, when Israel began allowing visitors into the tunnels below the Temple Mount — where Al Aksa Mosque and the Dome of the Rock, the third most sacred site of Islam, now stand — it sparked violence that left nearly 100 people dead. Muslims feared the Israelis were burrowing underground in an effort to destroy the Dome of the Rock, where they believe the prophet Muhammad ascended to heaven.

The tunnels have enabled Jews an even closer place to worship the so-called Holy of Holies, the inner sanctuary of the First Temple, where the Ten Commandments were said to have been kept in the Ark of the Covenant and near the Foundation Stone, which Jews believe was the first stone God used to create the world.

It also allows tourists a perch to see the breadth of the wall and the area’s long arc of history, everything from a Byzantine pool to a Roman street to an aqueduct built by the Maccabeans in 2 BC.

The tour starts with a “secret passage’’ that opens to a vaulted hall with evenly cut stones that were hewn at least 2,000 years ago, during the time of the Second Temple. It passes rows of massive, less evenly carved stones along the Western Wall, some weighing more than 600 tons. There are remnants of ancient gates used to enter the Temple Mount, a medieval cistern, ancient quarries, pools, and a dam.

There is also an audiovisual exhibit that includes a mockup of the Temple Mount on which stood the First and Second Temples — before they were destroyed — and shows how the area has changed over the centuries.

The narrow, dimly lighted passages are filled with explanatory signs and guides who help synthesize the long, complicated history. There are also devout Jews facing the wall and praying throughout the tunnels.

A passage from a tour brochure sums up the importance of the area for Jews: “Here at the foot of the Western Wall, more than any other place on earth, the memories of the Jewish past mingle with the hopes of the Jewish future.’’ To make a reservation for a tour of the tunnels, contact the Western Wall Heritage Foundation at 2 Ha’Omer St., Old City, Jerusalem, 97500, Israel, or call 011-972-2-627-1333, or visit english.thekotel .org. Adults about $7, students about $4.