In the shadow of the Andes, a sleepy town known for its centenarians may hold the secrets to a long life 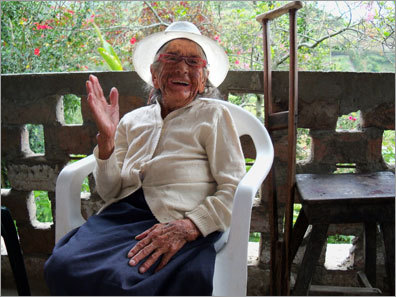 VILCABAMBA, Ecuador — I’ve barely stepped off the plane when the stories about the Valle de Longevidad — Valley of Longevity — start. My cabdriver asks what I’m doing in this small town in southern Ecuador, and I tell him I’m in search of the legendary old people of Vilcabamba. The cabbie brightens. “My great-great uncle lived to be 127 years old,’’ he says. “His name was Miguel Carpio.’’

I’ve come here to ferret out truth from myth: Does this off-the-beaten-path place really have some sort of magic charm, where centenarians are the norm? Or is it mostly legend, started a generation ago by an article in National Geographic magazine and picked up by locals eager to promote tourism?

In the early 1970s Dr. Alexander Leaf visited three places known for longevity, all remote and mountainous: a village in Kashmir, another in the Russian Caucasus, and Vilcabamba. Leaf, then a professor at Harvard and chief of medical services at Massachusetts General Hospital, wrote that in 1971, Vilcabamba, with a population of 819, had nine people older than 100. In comparison, the United States had three centenarians per 100,000 people.

According to Leaf, a doctor in Quito had studied the diets of the elderly in Vilcabamba and concluded that they took in about 1,200 calories a day, low in fat and cholesterol, which would minimize heart disease. In addition, physical activity required by living in a high altitude improved their cardiopulmonary function.

And then there was the genetic component. Many of the uber-elderly Leaf spoke to had a long-lived sibling or parent. In an isolated village where many are interrelated, Leaf speculated that a few people lacking “bad genes’’ that increase morbidity might have been the source of the longevity.

Nearly 40 years later, Vilcabamba has grown to 5,000 inhabitants. It was connected to the larger world 30 years ago by a winding, two-lane highway. But it is still a sleepy town with a square anchored by the requisite church. In a nod to tourism, some restaurants, spas, and excursion agencies have sprung up on the surrounding streets. There are outfitters who lead hikes or horseback rides into the nearby Podocarpus National Park with its 350,000 acres, lakes, waterfalls and streams, and abundant plant and animal life.

At 5,000 feet, Vilcabamba lies in the shadow of the Andes with views of lush valleys and distant purple slopes. With an average temperature of 78 degrees, the town enjoys eternal spring. Everything grows here: orange, lemon, and lime groves, sugar cane, banana trees, and flowers of all hues.

But what about the old folks?

My cabbie, Fabricio Peralta, is eager to help me on my mission. “It’s the water, the air, the food they grow,’’ he offers. Vilcabamba, he boasts, was organic before anyone knew what that meant. The old-timers have always eaten what they grow, nothing out of a can or box, and no pesticides.

“The grandmas make this horchata tea with eight or 10 medicinal herbs they grow,’’ says Peralta. “They drink this kind of tea every morning.’’

The alleged fountain of youth could indeed be something in the drinking water. Highly mineralized, from pristine mountain springs, the water is bottled and sold in stores. Labels on the Vilcagua spring water bear the likeness of a robust elderly man. The same sort of logo adorns the sides of the town’s taxis.

Judy Meumunier moved here a year ago from Indianapolis after reading about the town on the Internet. “It’s been the best year of my life,’’ says the retired real estate broker. “The weather, the scenery, the people — I just love it all.’’

Does she see a lot of old people? “Yes, they’re pretty amazing. My cabdriver told me his relative lived to be 127.’’

Hmmm. Sounds familiar. My cabbie directs me to the town park, where I find Nesto Carpio, son of the late, legendary Miguel, “who spent only one night in 127 years in the hospital, his last night on earth.’’

But Nesto is a youthful 92 and only retired a year ago from farming beans, coffee, and maize. He wears thick glasses but says he feels fine and is on no medications. “It’s the food, the good water, and air,’’ he adds.

At the local hospital, Dr. Juan Espinoza says there’s something to that. “The old people, they eat natural food that they grow, they walk a lot, they work. They’re strong.’’ And, he says, “They’re active sexually.’’

Another Carpio — Victor, the hospital pharmacist — has published a magazine devoted to the super-elderly of Vilcabamba. With about a dozen subjects, most of them hovering around 100, Carpio writes that though they may look old they are strong and agile, many of them still working.

He tells me about Vincente Pilco Torres, who will be 110 — allegedly — in August, and says he’s the town’s oldest resident. His only problem? He’s hard of hearing.

I can’t locate Torres, but I find Manuel Picoita, allegedly 105, sitting on the steps of a disheveled house shared by four generations. The extended family, which honors the elderly, is another reason given for the longevity. A nursing home would be unheard of.

There are four generations living in the home of Lucila Victorios Guerrero, who is said to be 104: Guerrero, her daughter, granddaughter, and great-grandson. Though her hearing is perfect, her eyes are not, and she walks with a cane. For decades, she worked as a seamstress. She gets up daily at 4 a.m. and starts breakfast for the family. She drinks coffee “to give me strength’’ and goes to church every Sunday.

There’s another theory about the “longevos’’: Maybe they are lying about their age. They don’t have driver’s licenses or birth certificates. (But there’s one glitch in this hypothesis: since when do women lie to make themselves older?)

In my strolls around town, I don’t see an abundance of old people. Peralta often has tourists like me ask him where all the old folks are. “I tell them they’re out in the fields working, not lazy like you.’’

Still, I’m not convinced that there are more centenarians in Vilcabamba than elsewhere. But as word of the valley’s fabled longevity has spread, visitors have flocked here.

“There’s still a lot of healthy longevity here,’’ says Brian O’Leary, a former MIT-educated astronaut and author who moved to Vilcabamba with his artist wife six years ago. “However, the gringo ‘invasion’ does offer more temptations such as processed food that is making the tradition shrink.’’

Several of the “viejos’’ have died in recent years, and the younger generations are unlikely to live as long, says Espinoza, who is seeing more diabetes and heart disease.

Richard Fontes, a Brazil native who moved to the United States as a teenager, has lived in Vilcabamba for nearly 20 years. He came to town, commissioned by a Miami doctor to look into “this longevity thing.’’ When he arrived, there were few cars; people tied horses or donkeys to posts in town.

“I wanted to know about the food they eat, the water they drink, are they sexually active, how do they take care of themselves when they’re sick?’’ says Fontes.

He concluded that before the highway was built, in 1982, there was a high percentage of centenarians. “You had a small valley with all the natural elements, a small gene pool with longevity genes in there.’’

Each family, he says, had its own garden and grew herbs for horchata tea. “It’s a blood cleanser, a kidney cleanser. It’s medicinal and they drank it all the time. Now, you have Coke, you have Fanta, and alcohol is rampant.’’

In addition, the last five years have brought construction of hotels, more cars, and microwave towers for cellphones, he says. Fontes ran a health food store for awhile, but “nobody was interested.’’

Fontes, who nevertheless loves Vilcabamba, concludes: “They ought to just sell it for what it is, a great place to live, with great water and a great climate. And you can get a great house for $70,000.’’

When I get back from Ecuador, I decide to see if Leaf, who wrote the original National Geographic story, is available for comment. He is. At 90, he still goes to the office every afternoon to research the effects of fish oil and fatty acids on longevity.

So, how does he feel about the longevos 40 years later? “Grossly exaggerated,’’ he now says. “None of them were nearly as old as they claimed. They do grow old and remain active, but I’m 90 and I’m still active, too.’’

How to get there
Flights leave for Loja twice daily from Quito. Round trip about $150.
From the airport, Vilcabamba is about an hour and 15-minute drive; taxi shuttle available.
Where to stay
Hosteria de Vilcabamba
011-593-9-264-0271
One of the nicer motels/inns. Lovely grounds include a resident llama, parrots, and a pool. Doubles $34, including breakfast.
Montesuenos Eco-Retreat
011-593-8-812-0712
www.montesuenos.org
Brian O’Leary’s
Mountainous inn is a couple of miles out of town. Rates include breakfast, wireless connection, use of kitchen, and stellar views of the Andes and valley. Doubles, $50, $35 for single.
Madre Tierra
011-593-9-264-0269
www.vilcabambamadretierra.com
Looks like a laid-back hippie paradise. Rooms range from $25 for a basic single to $88 for a quadruple, including breakfast.
Where to eat
La Roca
Direccion Calle Agua de Hierro y Eterna Juventud
011-593-9-264-0364
Specializes in pork and steak platters, entrees $5-$8.
La Terraza
Central Plaza, corner of Diego Vaca de la Vega and Bolivar
011-593-9-264-4108
Fajitas, nachos, and other Mexican-style food, entrees $4-$8.
What to do
Caballos Gavilan
011-593-9-016-1759
Guided horseback rides and hikes along mountain or valley trails, $20 to $50.
Beauty Care
Diego Vaca de Vega y Bolivar
011-593-9-326-1944
Karina will give you a great 30-minute massage for $8 or a 30-minute foot massage for $6, among other services.
Mandango hike
This peak juts out of the Andes and is a good two-hour hike that offers panoramic views. Stop at tourist information on the town square for directions.