THIS STORY HAS BEEN FORMATTED FOR EASY PRINTING
World class

A semester in Beijing 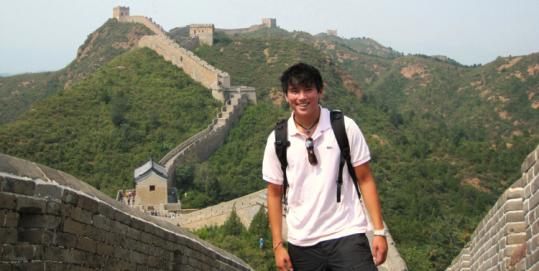 John R.R. Howie, a junior at Boston College, wants to be where the action is. For an economics major, that means China, “the most exciting and opportunistic place to be in the 21st century.’’ At Peking University (http://en.pku. edu.cn/) Howie is taking courses in Mandarin, Chinese history, economics, and business. To learn more about his experiences in Beijing, go to http://johnhowie .wordpress.com/.

DORM LIFE: “The hot water is shut off at 11 each night until the morning. The conditions have been pretty good, although one morning mud came out of the shower and sink instead of water. Our dorms are hotel-style, and we are spoiled with a maid coming in every morning. I soon found out that international students are extremely privileged at Peking University. Most of the [Chinese] students don’t have a shower, refrigerator, or air conditioning and share a common bathroom between floors. They have to walk to designated showers on campus, which can be at least 10 minutes away, so you often see people in pajamas carrying a shower bag walking through the campus.’’

HOLD THE SCORPION: “A popular street food is chuar, skewers of anything from meat to cabbage and everything in between. Of course there are the infamously bizarre chuar bearing scorpions that still squirm, eels, snakes, and even sea horses, although those are the extreme. When going out to a nice meal, the rice will never be served until the end. This is both a sign of respect (on behalf of the establishment) and wealth (on behalf of the patron), as eating rice along with the main dishes signifies that one is filling up on the ‘cheap stuff’ rather than the meat or fish.’’

STRESS BUSTERS: “Students work incredibly hard and seldom go out to have fun, often working entire weekends. Their one outlet to relieve stress is KTV, also known as karaoke. These are not just any old karaoke bars either. I went to one that resembled an affluent hotel with green marble floors, chandeliers, and a high-end buffet. During the week people often play tennis or basketball on campus.’’

LISTEN UP: “Students listen to all types of bands . . . mostly pop reminiscent of Britney Spears. Chinese rap and boy bands are popular, although not many seem to listen to American music.’’

MIND YOUR MANNERS: “Always extend both hands when offering something as it shows your sincerity and humility. When clanking cups and offering a toast in celebration, always push the other person’s cup up above yours, again showing your humility and respect for them.’’