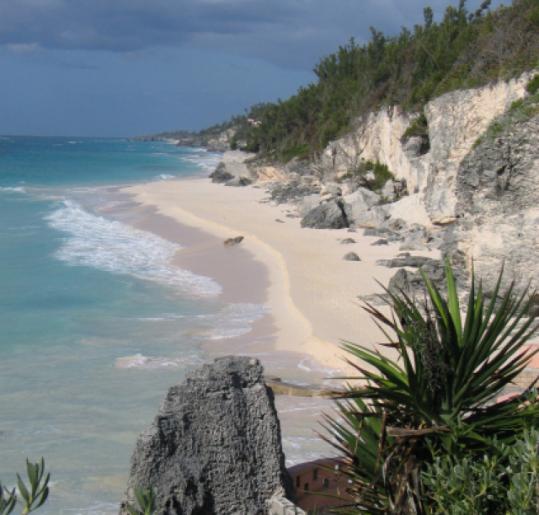 Surf Side Beach is on Bermuda’s South Shore. (Hilary Nangle for The Boston Globe)
By Hilary Nangle Globe Correspondent / January 24, 2010

BERMUDA - When New England is fast in winter’s clutches, this island delivers a dose of spring tonic. Although locals consider Bermuda chilly, it’s balmy compared with the Northeast. Ocean waters may be cold, but crowds are few, and the price is right.

Just a two-hour direct flight from Boston (although some of the best deals are on , connecting through New York), Bermuda is in the Atlantic time zone, 650 miles east of Cape Hatteras, N.C. It’s in the Atlantic, not the Caribbean, which is why the water isn’t warm. And it’s not just one island, but a string of 181 causeway-and-bridge-connected islands and islets stretching from St. George on the East End through the capital city of Hamilton to the Dockyard on the West End. It’s a British territory, with the Bermuda dollar the official currency, but the US dollar is equally accepted.

May into September is Bermuda’s peak season. I’ve found that by visiting between November and March, when temperatures are usually in the 60s, Bermuda is uncrowded and affordable.

“We had a fabulous time,’’ said Abbe Levin of Boothbay, Maine, who visited in March. “My husband and younger son golfed daily - they got great deals - and my older son and I explored beaches upon beaches with no other people.’’

“Deals’’ is the key word. Bermuda tends to be pricey, with expensive lodging, dining, and taxis, but there are ways to avoid the high costs. One of the biggest expenses can be getting around, as there are no rental cars, just scooters. Scooters aren’t ideal for everyone, and can be dangerous. “Just about every flight leaving the island has at least one person in a cast or with a nasty road burn from a scooter accident,’’ one hotelier told me during my first visit. Taxi fare between Hamilton and the airport or Dockyard can reach $50 with tip.

Bermuda’s public transportation system covers the island end to end from a hub in Hamilton. Bus fare is $4.50 cash (coin only) or $4 token, but the better deal is a transportation pass, which ranges from $12 for one day to $45 for seven and includes ferries. Savvy travelers use the bus to get to their hotels from the airport. “We used the bus system exclusively,’’ Levin says. “It was cheap and convenient, very laid back and relaxing, and we actually met lots of locals.’’

While many visitors limit their dining options to either their hotel or restaurants in the chief tourist areas, these often have big-city prices. If you want to know where the locals go, ask folks.

“Winter is a great time to eat out in Bermuda because restaurant owners suffer from the lack of tourists, so they’ll put on great offers to get locals to leave the house and eat out,’’ says Mary Dunn, an island resident.

One of her winter favorites is the Hog Penny, a jolly British pub serving comfort foods such as steak and fries and roast chicken. “It’s a small cozy place with a bar, and they do a really good winter deal.’’ Another is Pearl, a new sushi restaurant. “The food is excellent, and if you go before 7 p.m. everything on the sushi menu is half price.’’

Dunn offered a night life tip: Hubies jazz club in Hamilton. “It’s a very local, Bermudian place to go. You get people from 18 to 80 years old. It’s tiny and intimate - like being in someone’s living room - entry is $5, drinks are cheap, and the live music is fantastic.’’

By asking everyone from taxi drivers to museum guards, I’ve hit on a few jackpots in Hamilton. One is The Spot, a cafeteria-style restaurant on Burnaby Street serving good food at a fair price. Another is the Fork Out Dine Around (www.diningbermuda.com), valid through April 15. It provides three three-course dinners at any of nine participating restaurants for $135. But my all-time favorite is The Fish Hut, an ultra-local joint on Court Street. It serves big portions of some of the island’s best fried fish and often has a lobster special.

“I don’t think I’d previously played a par 3. I thought it might be boring and that you couldn’t hit a wood off the tee,’’ says Jeff Cohen, of Brunswick, Maine, a recent visitor. “But I enjoyed it. It gave me a chance to practice my irons, the views were lovely, and the course was beautifully maintained.’’

For serious golfers, Bermuda’s Three Nights and Three Rounds special (800-BERMUDA, www.bermudatourism.com) is valid through March 31. The package delivers not only a room at one of the island’s high-end resort hotels and greens fees at some of its top courses, but also daily breakfast, club rentals and cart at each course, and three sleeves of golf balls. Package play is on the Port Royal Golf Course, home to the 2009 and 2010 PGA Grand Slam of Golf, Riddell’s Bay Golf and Country Club, and Belmont Hills Golf Club. Per person rates, including taxes and based on double occupancy, are $599 at the Fairmont Southampton, $672 at the Pompano Beach Club, and $673 at the Newstead Belmont Hills Golf Resort & Spa. Listed greens fees plus club and cart rental total about $590, and the least expensive listed room (at one of these hotels) is $199 per night, so the package is a deal.

Winter rates at the oceanfront Surf Side Bermuda Hotel (800-553-9990, www.surfsidebermuda.com) begin at $180 for a room, $225 for a one-bedroom suite with full kitchen. Internet-only rates and other specials can lower those costs to $132 and $164. It’s a nice, if a bit tired, clifftop property, with a good restaurant, pool, fabulous views, and an eroding beach.

Far more low-key are the island’s guesthouses and cottages. Situated upon beautifully landscaped grounds and with a patio fronting on Hamilton Harbor is Granaway Guest House (441-236-3747, www.granaway.com), a renovated manor house dating from 1734 with a cottage. Winter rates are $100-$160 including breakfast for a manor room, $150-$200 for the self-catering cottage. Fronting on a private beach about 10 minutes from Hamilton is Grape Bay Cottages, where a two-bedroom cottage is $270 per night through March 31, with a five-night minimum.

Hilary Nangle can be reached at hilary hilarynangle.com.