Elderhostel looks to the younger set 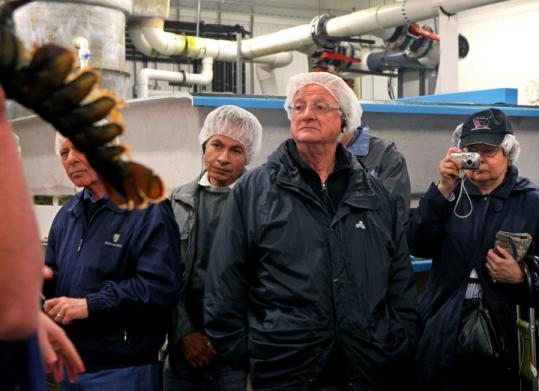 Elderhostel offers travel and learning experiences for members. As part of the group’s “Dine Like a Critic’’ class, members toured a Legal Seafood plant in Boston yesterday. (Michele McDonald for The Boston Globe)
By Bella English Globe Staff / September 29, 2009

In an effort to attract new clients in a tough economy, Elderhostel, the popular program founded in 1975 to help senior citizens travel on the cheap, is changing its name to Exploritas, lowering its minimum age requirement to 21, and trying to revamp its image - causing some consternation along the way.

Some of the Boston-based company’s older clients are not happy about the name change, which becomes official Thursday, nor are they shy about expressing their feelings on Exploritas’s new social networking site. Others are unhappy about the lowering of the minimum age. When Elderhostel was created, people 60 and older could join. In 1993 the minimum age was dropped to 55.

The rebranding, which follows financial losses at the nonprofit, is primarily an attempt to appeal to baby boomers. Officials say that neither word in the original name - “elder’’ or “hostel’’ - accurately reflects the changing face of the company. Moreover, the oldest boomers are now 63 - about the average age of a first-time Elderhostel client. And many are not thrilled with being called “elder.’’

“The whole conversation began because the baby boomers were coming up, and we had begun to hear from some of our younger participants in their mid-60s that the name was a barrier,’’ said Elderhostel president Jim Moses. “They’d tell their friends about their great experience, but when they told them the name, the response was, ‘Either you’re on your last leg or your last nickel.’ ’’

Elderhostel started on five New Hampshire college campuses with the mission of providing an affordable educational experience to senior citizens. Though clients originally stayed in dorm rooms, for years they have been placed in hotels. The company offers hands-on “experiential’’ travel groups led by specialists in various areas: cultural and history tours, nature programs, and study cruises.

The company runs 8,000 programs in 90 countries, 6,000 of them in the United States. They range from sedentary trips, such as five days of music appreciation at the Peabody Institute in Baltimore, to physically challenging ones, such as backpacking in the Grand Canyon. The average all-inclusive cost for US programs is $100 a day; for international programs $200 a day.

The name Exploritas “tells of exploration and the lofty search for truth,’’ said senior vice president Peter Spiers. (“Veritas’’ is Latin for “truth.’’) Though the program name has changed, the nonprofit’s corporate name will remain Elderhostel as a nod to the older, loyal clients who have returned year after year.

“Our base is critical to us,’’ Moses said. “We have no intention of alienating them. We just recognize that some people don’t think of themselves as being older.’’

In a letter on the company website, Moses said he expects the same programs to be offered and mostly older people to continue signing up. “The simple message is that we won’t be actively seeking any participants younger than baby boomers, but neither will we be turning away any adult who loves lifelong learning.’’

The average Elderhostel client is 70, and Moses notes that folks in their 70s don’t like being called elderly, either. “People in their 80s don’t mind,’’ he says. “They say, ‘Those young whippersnappers in their 70s who don’t want to be called old are just being silly.’ ’’

Moses said he believes that few 20-somethings will sign up. Rather, he said, the agency hopes to attract more people in their 40s and 50s. The age of participants has rarely been enforced anyway. “Say there was a couple traveling together, and one was 58 and one was 54,’’ Moses said. “We’d always let the younger one come. And there are lots of cases where older women who are widowed or divorced come with their daughters. Why on earth would we turn them away? Anyone with a sincere interest in lifelong learning and educational traveling, we should be welcoming them.’’ Indeed, of the 155,000 participants in 2008, 20,000 were under the age of 50, he said.

The changes come as Elderhostel has been buffeted by the recession. The clientele peaked in 1999 with 261,000 enrolled but began dropping after the terrorist attacks of Sept. 11, 2001. In 2007 revenues finally increased - $7 million to $222 million - but in 2008, as the economy faltered, 10,000 fewer participants signed up, and the company lost $9 million. Participation is down again this year, and the company has reduced its full-time staff by 10, down to 165.

Still, many Elderhostel veterans are upset at the changes. On the company’s new networking site, Exploritas Connection, most posters expressed dismay. “I must confess, I don’t like the new name,’’ one woman wrote. “And I am upset to learn the programs will be open to ages 21 and up. One reason Elderhostel programs appealed to me was the 55 and older age. ‘Birds of a feather,’ you know.’’

Wrote another: “It is unlikely that Exploritas will be my first choice as Elderhostel has been for the past 10 years (30 plus trips). Elderhostel is dead and gone. What survives is questionable.’’ Another was more blunt: “21-year-olds???? Are you kidding me??????’’

The blog posters could not be contacted to have their identities confirmed.

Barbara and Nick Campagna of Norwood recently took their 11-year-old grandson on an Elderhostel trip called “Fun, Fins, and Fossils’’ to Maryland, where they visited a marine museum and hunted for fossils. They applaud the changes. “If these younger people want to learn, that’s great,’’ she said. “We can all learn from each other.’’

Since they turned 55 more than a decade ago, the Campagnas have been on 15 Elderhostel trips. They’ve kayaked in the South Carolina Low Country, explored the lighthouses of Maine, climbed the red rocks of Sedona, and ridden a river boat from Venice to Milan. “We’ve met a lot of people who are interested in the same things we are,’’ said Barbara, who is 66.

Rochelle Kruger, who lives south of Boston and has been on 17 Elderhostel trips, said many people are reluctant to join because they don’t like the name. “The term ‘elder’ turns them off,’’ said Kruger, 69. “They don’t want to travel with just old people. There will be people who will say we’ve always had that name, but I think now is the time to change it.’’