Where they went: Turkey 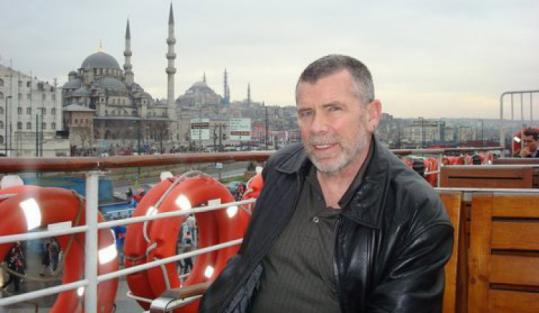 WHEN: Six days in March.

WHY: “We started traveling together out of the country about 12 years ago,’’ Cindy Walsh said. “We first went to London, then France, and Rob thought Istanbul sounded really interesting.’’

CHANGE OF HEART: “I kind of put him off; it sounded a little too exotic for me. Then after Bush attached Iraq, I thought people wouldn’t be too fond of Americans anywhere where there was a Muslim population. Then I saw a great airfare, and someone on the fodors.com forum had come back and written a glowing report, and I thought, what am I waiting for? I felt really stupid when I saw how friendly everyone was. The Turkish people are the friendliest people I’ve met.’’

TERRACE WITH A VIEW: Following the online advice of travelers, Walsh booked a room at Hotel Empress Zoe. “We loved it. It was very old-Turkish style but boutiquey. We decided to get the penthouse suite. It wasn’t luxurious, but it had a terrace with beautiful views.’’ They looked onto the Bosphorus, the strait that separates Europe and Asia, as well as Istanbul’s famed Blue Mosque, the national mosque of Turkey.

FERRY TO FREE TIME: Their favorite outing was a ferry trip up the Bosphorus. “It’s a regular state ferry run, and they stop at different ports on both sides. The river traffic is crazy, ferries crisscrossing each other and honking, freighters going through, pleasure boats, fishing boats, even sailing boats.’’ Their ride ended at the mouth of the Black Sea (which the Bosphorus connects to the Mediterranean), in Anadolu Kavagi, where they had a few hours free. “It was beautiful, forested with steep hills going down to the water and towns built into the sides of the hills. At the top of the hill there’s the ruins of a castle you can walk around.’’ Back in town, where stray dogs and cats wandered by the dozens, waiters worked to reel in tourists for lunch.

THE SHOPPING SPIRIT: Initially the couple was reluctant to bargain in the Istanbul bazaar. “The first time we even went out of the hotel a carpet salesperson followed us all around, even waiting for us to come out of the Blue Mosque. I kept yelling at my husband, ‘Put your head down, don’t look at anyone.’ But finally we started to get into the whole aspect of shopping and how to have fun with it,’’ Walsh said.

ONLINE FIND: Again following online advice, the Walshes sought out the restaurant Ziya Sark Sofrasi. “We were really impressed. It was small and good and very Mediterranean.’’

Send suggestions within a month of your return to diane@bydiane daniel.com.