SÃO MIGUEL, Azores - From Ponta Delgada, the road to Furnas hugs the south coast. Holstein cattle graze on verdant slopes that drop away to the sea. At the water's edge, red-tiled roofs cluster around fiord-like inlets sheltered by black cliffs. Beyond the white foam at their feet, the blue-black ocean stretches, it seems, to infinity.

That is, perhaps, the hardest thing to grasp about these nine islands: They are out there, 930 miles of wide-open ocean from Portugal, 2,300 miles from North America, although direct flights make it a four-hour hop from Logan Airport.

The volcano cones that form this archipelago are part of the Mid-Atlantic ridge, a vast undersea mountain range that meanders between the poles. The islands rise at the junction of three tectonic plates, and when these shift, molten rock boils up to fill the cracks, sometimes sending mild tremors through the chain. It is this volcanism that gives the islands their compelling landscape of collapsed craters and Fuji-shaped peaks.

Plotting an itinerary around crater lakes, sulfur springs, and lava caves, we divide a weeklong trip between the most populated islands, São Miguel and Terceira.

And so, on São Miguel, we drive from the airport directly to Furnas, a spa-resort village in a "furnace" of volcanic hot springs. A popular tourist destination in a valley ringed by mountains, Furnas is home to an Art Deco hotel, the Terra Nostra Garden, which overlooks a 150-year-old garden-turned-public park. The hotel, painted mustard yellow, stands on part of a former estate settled in the 18th century.

At the garden entrance is the hotel's sulfur spa, a pool of opaque, rust-colored water with eggy-smelling steam rising from the surface. It's not immediately appealing, but after watching other guests pad back and forth in orange-smudged bathrobes, we take the plunge. The water, thick and buoyant, enfolds the body in a liquid blanket.

Signs of the Azores' volcanic origins are everywhere: in the pastures that tilt away from the road at crazy angles, the crumbly pumice underfoot, and the abrupt slopes. The Furnas Caldera, a collapsed volcano crater above the valley, sends up plumes of steam near the lake. It is dotted with kettle-sized pits boiling with steam.

A drive to two tea plantations on São Miguel's north coast yields other sights: creamy-white calla lilies spilling down a meadow, freshly tilled red soil, a farmer bouncing along the road in a bucket loader. At the tea estate Chá Porto Formoso, the sole employee on duty says she is worried about the economy on this mostly rural island.

We spend the final day on São Miguel in the port city of Ponta Delgada. In the new high-rise Hotel Marina Atlantico, our room overlooks a marina getting a makeover and a stunning new outdoor pool. But it is the traditional side of the city we find most compelling. In the Square of the 5th of October, workmen are stringing lights for an upcoming feast. Gray-and-white stone mosaics decorate sidewalks and plazas in ever-changing patterns.

In Terceira we remember hearing that locals regard themselves as sophisticates. The island's cosmopolitan flair dates from the age of exploration, when sailing ships crossing the North Atlantic from Asia, Africa, and the Americas tied up in Angra do Heroísmo (Angra, for short), founded in 1534. Today, the old city center, with its early Renaissance architecture, and Monte Brasil, a 16th-century Spanish fort (Spain annexed Portugal in 1580), compose a UNESCO World Heritage site.

We are too early to watch the unique Terceiran sport of running the bulls, in which a bull tied to a long rope chases people who dare to approach. That begins in May and lasts through summer. Instead we explore Angra's working waterfront of cargo docks and fishing boats. When fog envelops the district, we retreat to plot our route to the volcanic caves in the island's interior.

The next morning the rain-washed countryside glistens. The road to the first volcanic cave zigzags to the summit from Santa Barbara, where we stop to ogle the Mistérios Negros, or Dark Mysteries, a cluster of volcanoes that fractured the landscape into a curious jumble of sharp hills and clefts. Just down the road, a sign announces the Gruta do Natal, or Christmas Cave. Inside, we don the helmets required to walk through the 2,100-foot lava tube. We descend to the cave to the sound of piped-in Celtic Christmas tunes, a tribute to the cave's opening to the public on Christmas 1969.

A guide explains that a lava tube is a channel in which lava flowed long enough to form a crusty outer shell. Inside the hard exterior, liquid lava kept flowing, petrifying in ropy streams and a popcorn-like crust on the floor of the cave.

Another day, another zigzagging drive, this time to Algar do Carvão, or Algar Caves, a series of interconnected lava caves at the center of the island. A volcano chimney, or vertical tunnel in the cone, marks the path of an eruption of molten rock 2,000 years ago. The chimney and caves measure 300 feet top to bottom. Visitors can explore palatial chambers by way of a winding staircase, past a changing show of natural spectacles. This time the piped-in New Age music seems almost appropriate.

The tour guide explains that this volcano is dormant, but not yet extinct; for that, it still has 3,000 years to go. Meanwhile, it's safe to gaze up the twisting chimney, where misty daylight lights up the mineral streaks that have striped the wall in ochre and rust.

We spend our final day roaming one last collapsed volcano cone, Monte Brasil, wrapped in the ancient stone parapet of Fort São João Baptista. From this promontory south of the city, the view takes in miles of ocean. In the opposite direction the city stretches out, a sea of low, white buildings capped in red tile. It's a wistful moment.

Next time we will soak up the history of Angra, drive to the scenic harbor of Praia da Vitória, explore São Miguel's crater lakes, and, perhaps, fly to one of the seven other islands. 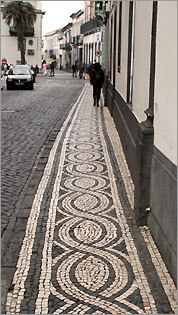 (Bill Regan for The Boston Globe) Ponta Delgada's sidewalks are made up of intricate mosaics.