In the rental-car world, the cost of going green is high 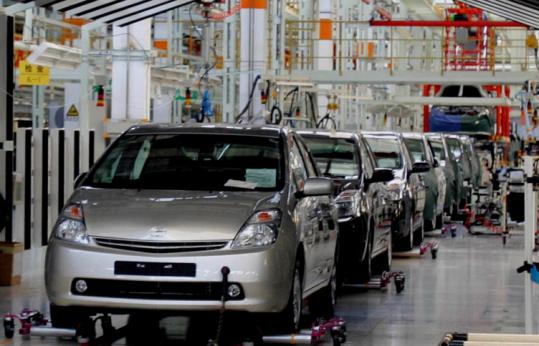 Toyota Priuses are rolling off the production lines, but the supply of all hybrids is limited in the rental car market. (Associated Press)
By Michelle Higgins New York Times News Service / September 24, 2008
Text size – +

As travelers continue to face sticker shock at the gas pump, more are turning to hybrid rental cars in search of savings. But with supply limited and demand so high, these green cars are commanding a substantial premium.

In a recent search for a weekend rental from San Francisco International Airport in August on the Avis.com site, the Altima hybrid was the most expensive vehicle - $207.98 for a two-day trip - more than even the sporty Mustang, for $161.98, or the Pontiac Vibe, listed as an "intermediate SUV," for $149.98.

Also in San Francisco, , the parent company of Dollar Rent a Car and Thrifty Car Rental, charges roughly 20 percent more for the Prius hybrid than for other economy or compact cars. Hertz charges about $5 a day extra for its Green Collection, which includes 3,400 Priuses. The company says the fee covers the cost involved in making certain these cars can be reserved by make and model.

The high markups are largely a result of supply and demand. Dollar and Thrifty have 215 Prius hybrids, most of which are in San Francisco. That's less than 1 percent of the total US fleet. Hertz has approximately 4,000 hybrids or about 1.5 percent of its North American fleet. Avis has about 2,500 hybrids out of roughly 375,000 vehicles in its 2008 model fleet.

Another issue: Hybrid cars, which are also in short supply in the retail market, cost rental car companies more to buy than other vehicles. To recoup some of that cost, car rental companies charge more to customers. A traveler might reason that, despite the higher base rate, renting a hybrid could still end up costing less overall when gas is factored in. But this didn't prove to be the case in a recent comparison of Hertz hybrids with economy cars by Sarah Pascarella, an associate editor at SmarterTravel.com, a website that offers travel advice.

A two-day trip from San Francisco to Yosemite National Park was $55 cheaper with the Hyundai Accent economy car, costing $139 round trip, including gas based on the American Automobile Association's online fuel cost calculator. The same trip with a Toyota Prius hybrid came to a total of $194. A trip from New York City to Cape May, N.J., cost about the same when comparing the Prius to the Accent, while the economy car was about $43 less for a trip from Seattle to Olympic National Park.

"I found choosing an economy car over a hybrid was often the more economical choice," wrote Pascarella on SmarterTravel's Tip of the Day.

In some cases, even renting an SUV can be cheaper than renting a hybrid. Take the San Francisco weekend rental on Avis.com. When factoring in gas (at $4.19 a gallon) for a two-day trip from San Francisco to Reno, Nev., the total cost to rent the Nissan Altima hybrid came to an estimated $262. The same trip in the Pontiac Vibe was $207.

Nevertheless, travelers are reluctant to book SUV's or other large vehicles that consume a lot of gas. "It's a sign of the times," said Neil Abrams, president of Abrams Consulting Group, based in Purchase, N.Y., which tracks the rental car industry. "They're having a hard time in off-peak periods even giving away these things."

The offer of free upgrades - a perk that once delighted customers at rental counters when the smaller vehicle they booked was sold out and they drove off in a large, often cushier car, for the same price - is now backfiring on rental car companies.

"It used to be that many customers would purposely book a smaller car knowing that they could likely get an upgrade at the counter for free when the car they reserved wasn't available," Chris Payne, a spokesman for Dollar Thrifty Automotive Group, wrote in an e-mail. "Today there are a lot of objections to the larger vehicle and a lot of times the consumer's perception of a car being a 'gas guzzler' doesn't match up with reality."

To show customers that the difference in gas cost when upgrading isn't as great as they may think, the company is introducing a chart at rental counters with vehicle fuel cost comparisons based on 100-mile trips. For example, an upgrade to the sexier Ford Mustang from the Toyota Camry LE will add $4.39 to your gas bill on a 100-mile trip, according to the chart. Moving up from the Toyota Prius to the Chrysler 300 will cost $12.16 extra in gas.

"From an economic benefit standpoint, consumers have to ask, does the value proposition really hold," when choosing between a hybrid and another rental car, said Abrams. "If you're going to be renting a car for two weeks and traveling thousands of miles, it may be a benefit. It's not unlike the decision a consumer has to make when he buys a car," he said. "How long do you have to hold the car to get the full cost benefit?"

Recognizing the premium customers typically pay to rent a hybrid, San Francisco International Airport is introducing a rebate program to encourage travelers to go green. Starting Dec. 30, customers renting a hybrid will get a $15 credit on their rental bill. In the meantime, if your heart is set on a hybrid, consider renting at off-airport locations, which typically offer lower rental rates. If you only need a car for, say, a day trip to George Washington's Mount Vernon, just outside Washington, a car-sharing service is another alternative.

Zipcar, the largest service, with vehicles in more than 50 cities throughout North America, has lowered the hourly rates of some of its hybrids, charging between $6 and $10 an hour or from $60 a day to encourage customers to book the green cars, which in turn lowers gas prices for the company. All reservations include up to 180 miles of driving, the cost of insurance, maintenance, parking, and even gas. There is an initial membership and incremental mileage charges if you drive more than 180 miles.

A first-time user planning to try the service occasionally pays a $50 annual charge and $25 application fee. In a recent spot check, Civic hybrids were available for a two-day trip in Washington. Total cost: $152.90.