Finding a happy medium is the trick to multigenerational travel 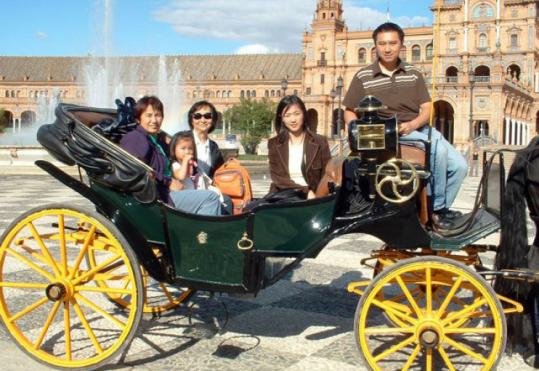 When I was a kid in the 1970s, vacation meant a trip to the Jersey shore with my parents, older sister and brother, grandparents, and aunts for a week of sun, sea, junk food, rides - and nonstop togetherness. In recent years we've added more global destinations, including a Caribbean cruise and a week in a villa in Tuscany.

My family isn't alone. More than half of the participants in Travelocity.com's annual members poll indicated they planned to take a multigenerational trip this year. And AARP found that among baby boomers planning adventure travel three in 10 said they would be going with children or grandchildren.

While traditional options offered by Disney and the cruise industry continue to be popular with families, resorts like Club Med and Atlantis, boutique hotel chains such as Kimpton, and smaller outfits like Greaves Tours, which offers multigenerational trips to India, also are courting these travelers, according to Amy Ziff, editor-at-large at Travelocity.com.

"We're seeing places from the high end, and every part of the spectrum, offering multigenerational experiences and really catering to families," Ziff said.

Whether you intend to kick back on a tropical island or stay close to home, here are tips to help ensure everyone is still speaking once you return.

Even if your family likes to plan out everything, keeping the itinerary flexible may work better with a large group.

Beverly Beckham, a Globe regional columnist who also writes for grandparents.com, celebrated her 40th wedding anniversary in January at Disney World with her husband, three adult children, their spouses, and a quartet of grandchildren under 4. They opted to do a different park each day and checked in regularly via cellphone if they separated.

"You really have to . . . let people do what they want to do," said Beckham, a Canton resident. "There can't be one bully who's in charge of everything. You can't herd people."

At the same time it helps to have certain rides or attractions in mind for each day.

Stacy Bartels, who has traveled to Disney World twice in recent years with her husband, Matthew Kaufhold, and their twins, Dana and Jacob, now 9, her mother-in-law, and on the second trip, her parents, tried to strike a balance between sticking to a loose schedule and allowing for spontaneity.

"We didn't want to over plan, but I don't think you can wing it with a group of people," Bartels said. "We had an idea of where we wanted to go and what we wanted to do each day, looking at what parades were when, but we had to be flexible with weather and how people were feeling."

When Weston resident Joe Pettirossi and his wife, Maureen, took their twins, Natalie and Will, 9, and her parents for a week on St. John in April, they recognized the importance of having enough space for people to chill. A four-bedroom house provided plenty of room for that.

"By getting a house, people could come back and interact in a big family room and kitchen, but you also had your own space, if you wanted to go off and read your own book, or the kids wanted to read by themselves," Pettirossi said.

The family tried to find a happy medium between being together and pursuing separate interests. Their routine was to hit the beach in the morning, return home for a late lunch, after which the grandparents would relax around the house, while mom, dad, and the kids went snorkeling or hiking.

During my family's cruise, we always met for dinner and booked several excursions as a group. But on days at sea, and during some side trips, we struck out on our own or in smaller numbers.

One of the biggest challenges for a multigenerational group can be the pace. For the Pettirossis, a mellow trip, where the main point was to relax, made sense for everyone.

"We have similar interests," Pettirossi said. "If they didn't like the beach, it wouldn't have been a vacation to bring them on. It was very beach-centric."

For the Bartels-Kaufhold trip, Disney proved appropriate for Bartels's mother-in-law, who uses a wheelchair for longer distances. The park is not only barrier free, but also supplies wheelchairs. "When you have someone who has a [physical] challenge, or small people, staying on site is good," Bartels said. "You can take a break midday, and you don't have to deal with driving or parking."

To mark their 10th wedding anniversary several years ago, Debbie Lin and her husband, Fred, set off on a 10-day trek across Spain with their mothers and daughter, Sophie, then 3.

They learned important lessons about keeping the pace appropriate for both the older and younger generations, the challenges of dealing with later meal times, and how to ensure that everyone was consulted on key decisions.

As most will attest, kids can make or break such a trip. Lin found keeping her daughter content was key. That meant the day's itinerary largely was built around Sophie's energies, and also included toting a reclining stroller, bringing plenty of snacks, and dressing her appropriately.

The best-laid plans won't pan out if family members are squabbling, so work out whatever differences you have before your departure. "If you don't get along at home, you're not going to get along when you're away," Beckham said.

Robert DiGiacomo can be reached at robcomo@aol.com.