Soaking up a quiet little beach 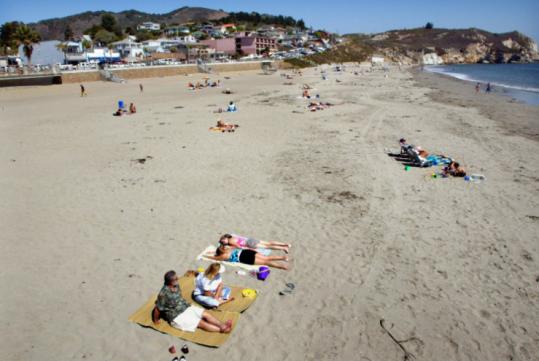 Avila Beach, Calif., was for many decades a busy oil port and is busy now becoming a laid-back beach town on the Pacific.
Email|Print| Text size – + By Stephen Jermanok Globe Correspondent / July 29, 2007

AVILA BEACH, Calif. -- From the coves of La Jolla to the wondrous views of Golden Gate Bridge at San Francisco's Baker Beach, California's shoreline deserves its legendary stature. Now you can add the sleepy hamlet of Avila Beach to the list of must-sees.

We had driven a little over three hours north of Los Angeles when we veered off Highway 1 to grab a bite. Three days later, we were still here soaking up the sunny bliss. It wasn't the white sand beach that seduced us, nor the mountains that hem in this small community. It was the utter absence of crowds.

Living in Huntington Beach years ago, I had come to the conclusion that if you wanted to savor a sublime stretch of Californian coastline, you would have to share -- especially, of course, in summer. That hidden beach south of Dana Point spoken of only among surfers would surely be overrun by that same tribe at sunrise. The rocky shores north of Laguna, favored by seals, are also a popular retreat for seal watchers.

So call me jaded, but I expected to spot a red '67 Corvette in mint condition cruising Front Street and the requisite hard bods flexing their abs on the beach. Instead, I found a family of four having a picnic dinner on the sand. And that's it. We walked the long pier, and there were no cotton candy or tacky T-shirt sellers a la Santa Monica. The only store sold bait.

"Where the heck is everyone?" I asked Lenny Harris, owner of Avila Grocery, half expecting a hurricane to smack the area at any moment. He chuckled and said that it does get busier on weekends when folks from nearby San Luis Obispo wander into town. "But we're midway from L.A. to San Jose, so it's too far for city day-trippers," he added. "Plus, there's that little problem of the oil spill."

For close to a century, oil was piped from the fields of central California to large tanks on a bluff overlooking Avila Beach. Pipelines beneath the town then transported the fuel from a storage facility underwater to tankers waiting at the company pier. Indeed, this town of 400 people fueled most of the Pacific fleet during World War II, becoming one of the world's largest oil ports at the time.

In 1988, a business owner wishing to expand his office found oil during a routine soil test. The oil company, , was forced to concede that its pipes may have leaked over the decades into town soil -- to the sum of 400,000 gallons. A decade later, the company launched one of the industry's largest cleanups, spending more than $100 million to remove black goo and settle with landowners. Truckloads of contaminated sand were shipped out and pristine beachfront shipped in. The funky little cafes and restaurants on Front Street, with names like The Jetty and Lighthouse Bar and Grill, had to be toppled along with a dozen other businesses and more than 30 homes.

Some storefronts returned. Avila Grocery, a gathering spot for residents since it opened in the early 1900s, was towed back to its original location and reopened on the new promenade. Down the block, the large family dining spot, The Custom House, reopened in 2002. Grab a booth and order wild salmon for dinner. Wash it down with one of the pinot noirs or merlots found in the nearby Paso Robles wine country.

Gone, however, are the small cottages and bars, hippie havens from the '60s. In their place are upscale lodgings like the Avila Lighthouse Suites, which opened last year. Sitting out on my terrace listening to the waves crash, saw no signs that Avila Beach had any woes whatsoever. The gentrification continues with the opening of a second upscale hotel, Avila La Fonda, last fall, which features the town's natural hot springs as a spa, and Alapay Cellars, a new wine tasting room.

Judging from my stay, however, people have been slow to trickle back. That's fine with me. Let them imagine the Valdez oil spill, while I lounge on the beach, sipping a boutique wine.

Stephen Jermanok, a freelance writer in Newton, can be reached at farandaway@comcast.net.

Where to stay
Avila Lighthouse Suites
550 Front St., Avila Beach, Calif.
805-627-1900 avilalighthousesuites.com
Each of the 54 suites has either a full or a mini-kitchen.
Rates start at $299 per night in summer.