KEY WEST, Fla. -- You're on a quest to find the old Key West, the one before , Banana Republic, and dropped their commercial anchors into this colorful tropical bohemia. Then you see a sign, maybe the sign, that seems to point the way.

The place has the look and feel of an old fishing boat or a tiki hut on Gilligan's Island with its tattered stools and tables. It feels almost like any South Florida waterfront bar, with small boats slung from the ceiling, license plates, and a jukebox with Bonnie Raitt and the Dave Matthews Band.

Regulars and visitors make toasts, swap stories, and listen to the waves lap at the historic seaport. Then you notice something in your peripheral vision -- the first of many such sightings.

A brown hen appears outside the bar's rocky back lot and stalks along William Street with a seeming carefree, don't-mess-with-me attitude, similar to the early pioneers and longtime Conchs (what natives are called here).

Duval Street, the city's main thoroughfare, is rife with bars, T-shirt shops, For Sale signs, and notices like ''American Apparel, made in downtown LA" that announce a store's pending arrival. But old Key West is still there. You may have to meander the side streets, study the small details, or just follow one of the chickens, considered descendants of fore-feathers brought here by settlers in the 1800s.

Although Hurricane Wilma whipped Key West and the rest of South Florida on Oct. 24, the city has rebounded. Businesses have reopened and tourists are back.

The island charms with a laid-back appeal, but the pace of life revs a little faster lately, thanks to scooters that buzz like chainsaws, behemoth cruise ships that tower several stories above the average building, and mainstream restaurants (Hard Rock Cafe) and bars (Fat Tuesday's) that have arrived.

I wanted to see the Key West that seduced its pirates, pioneers, and writers like Ernest Hemingway and Tennessee Williams, the island that serves as an intersection between the Atlantic Ocean and the Gulf of Mexico.

With MTV's ''The Real World" cast and camera crews descending last fall for its season scheduled to begin airing in early 2006, it seemed like a good time to visit the country's southernmost continental city before the music channel turned Margaritaville into a national cinema verite soap opera.

Under a soft midday rain with muggy temperatures, I followed the human traffic of flip-flops and tank tops and started at the end of the road, the southernmost point, or South Street.

A line of tourists 20 feet deep waited to be photographed here with a giant buoy that marks 90 miles to Cuba. As the visitors posed with the gray-blue Atlantic as a backdrop, aquatic artist William Sasser focused on the sea.

A resident since 1989, Sasser says old Key West is bars and pubs like the Green Parrot, the oldest operating bar in the city (1890), where a sign warns ''No sniveling."

''There are still pockets of it, the old Key West," he says. ''But everything is different now. It's overdeveloped, overpopulated, overpriced. Things change. There's not a whole lot we can do about it." Back toward the center of town, a boy greets people with a white hen. It doesn't seem to faze anyone. A few more native fowl can be found at the Chicken Store, where you hear a chorus of ''cock-a-doodle-dos" or ''ki-ki-ri-ris," a Spanish version. The Duval Street building is a haven for neglected birds. Their images are captured on magnets, cups, and shirts, and Kiwi, Bubba, and Homer call out to tourists from their cages outside.

The light rain eventually passes, and the sun crawls out and casts a bright glow. An enthusiastic crowd of black-vested members of the Latin American Motorcycle Association passes Sloppy Joe's Bar on Duval Street (probably the island's most famous bar thanks to Hemingway), while others stop for photo ops outside Jimmy Buffett's Margaritaville restaurant (think T.G.I. Friday's with a more tropical feel and all things Buffett).

Over at Mallory Square, home to the city's legendary sunset celebrations, Jeff Johnson doesn't want any of that tourist stuff. He sits on a bench, shirtless, an eagle tattooed on his bronze chest, and takes in the boundless blue sky and bobbing sailboats.

Johnson, a dry-dock worker, wanted some serenity, a piece of his own old Key West. This area was the hub of the city's shipwreck salvage industry and commercial shipping in the 19th century and the hub of steamship traffic for New York, Savannah, Ga., Galveston, Texas, and Charleston, S.C., according to historic plaques here. Ships still dock here, but more of the mega-party kind. The colossal Royal Caribbean cruise ship Empress of the Seas, for example, stares down from its berth.

Johnson prefers to visit the square in the afternoon when it's slower, before the tourists congregate to photograph the spectacular sunsets or board the Conch Trains down the street.

''This is where the old town is, but it changes day by day," saysJohnson, who has lived here on and off for 15 years. ''It's beautiful to live here but it's really expensive to live here.

''You can still find the old town in places. It still has the beauty, arts, and crafts and that is where the old town comes in," he says, as a mother hen clucks past with her chicks in tow.

Venturing deeper into the city on foot (most people prefer a cycle or moped) brings one to Bahama Village, where butter-yellow and white bungalows and cottages evoke the neighborhood of Bahamian settlers and Cubans who rolled cigars.

Bartender Mark Muhlenworth at the La te da grill suggested swallowing my pride and taking one of the trolley tours to get an overview of the city's history. But since the city is tiny, it's more fun to wander with a map. On that note, he advises, ''Go to the cemetery!"

That would be Key West City Cemetery, an oasis in the ''dead" center of the city rimmed by a black iron fence.

The dead here have stories to tell. Visitors walk amid the paved paths flanked by coconut palms and stacked, boxy, above-ground tombs. There's a memorial to the crew of the battleship USS Maine that sank off Havana Harbor in 1898, and another to the ''Cuban Martyrs," for their failed 1868 revolution against Spain.

Some of the inscriptions are quirky, like one that reads, ''I told you I was sick."

After an introspective stroll, I notice a lone hen strutting by. It confirms that the old Key West is alive and well. 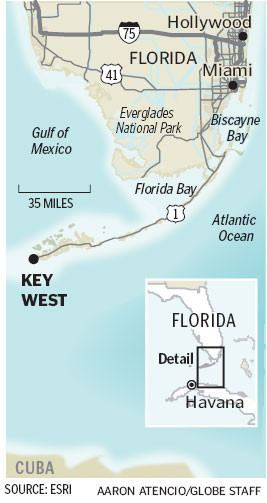