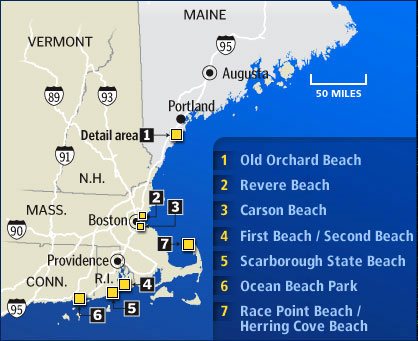 Beaches that may suit you to a T

The lure of the beach is irresistible when summer arrives, and New Englanders can consider themselves lucky that they don't have far to go to get to the ocean. (Consider the plight of landlocked European cities, which import sand and dump it along rivers; or Midwesterners who have to drive days to glimpse the sea.)

New England sun seekers are lucky in another way, too: They don't necessarily need a car -- or even a friend with a car -- to reach the beach. A variety of options, including train, ferry, bus, and rapid transit, can get you there.

Some transportation choices are strictly seasonal. For example, the Rhode Island Public Transit Authority, or RIPTA, adds a beach bus to South County June 25-Aug. 8. The Cape Cod Regional Transit Authority's bus service, the Breeze, runs a summer shuttle service from North Truro to Provincetown with stops at Herring Cove and Race Point beaches in the National Seashore. The Cape Cod Chamber of Commerce also publishes Smart Guide (www.smartguide.com) for carless travel ideas to and around the Cape.

Here are a variety of suggestions for beaching it while leaving the car at home. Be advised that some beaches charge admission or fees for showers and other amenities. Call or visit a website for fares and schedules that may vary depending on the day.

This venerable shore town wins the easy-rider award because the Amtrak Downeaster train platform is a two-minute walk from the beach. The Boston-to-Portland train, which began summer service here in 2003, stops at the beach May 1-Oct. 31. Passengers disembark at the First Street platform, and from there, it's just a two-block walk to the Atlantic and the impressive 7-mile beach.

The Downeaster has changed how the beach is used.

''We see more day-trippers and lots of grandparents with the grandkids in tow," said James E. Harmon, executive director of the Old Orchard Beach Chamber of Commerce, in a telephone interview. ''I see some of the same faces getting off the train two or three times a week."

The beach has attracted sunbathers and swimmers since 1837 when E.C. began accepting summer boarders at his farm up the hill. He later built a boardinghouse that was restored five years ago and operates as the Old Orchard Beach Inn, one of scores of accommodations in town.

Today, children plunge into the water (which tends to be chilly until August), spend their allowances at the video and game arcades, scream on the Palace Playland amusement rides, twirl on the carousel, and keep the food purveyors in business.

The landmark is the Pier, a building on stilts over the water. Dating to 1898, it stretched 1,700 feet into the water, until a 1909 storm cost it 1,000 feet and then the winter storms of 1978 demolished it. Today's Pier opened in 1980 as an arcade-style building with food stands, souvenir shops, a massage therapist, and pubs at each end.

Away from the Pier, food choices abound in the form of pizza, hamburgers, fish, fried clams, french fries, fried dough, crepes, Chinese takeout, and ice cream. The Sweet Potato Fry Co., at the foot of the Pier, has sweet potato fries, onion rings, and fresh limeade. Perfect fare with the sea breeze.

Public rest rooms and bathhouses are available in several locations.

How to get there: Amtrak Downeaster (800-USA-RAIL, www.amtrakdowneaster.com, www.amtrak.com). From Boston to First Street platform daily through October. Leaves from North Station and Woburn and Haverhill in Massachusetts; Exeter, Dover, and Durham in New Hampshire; and Wells, Saco-Biddeford, and Portland in Maine. Round trip from North Station: $40.

In the old days, this North Shore beach was a popular summer resort complete with amusement park, roller coasters, carousels, dance halls, and hotels. Over time, that all disappeared and was replaced by open spaces, high-rise apartments, condominiums, and a hodge-podge of architecture where anything goes. However, one thing hasn't changed: The 2-mile beach is still a magnet for hordes of sunbathers and beach lovers who have access to a public bathhouse and, for those who want sea air but no burn, Victorian-style pavilions.

From the shore, one can see planes taking off from Logan Airport, Nahant to the north, Winthrop to the south. When hunger hits, a variety of eateries, takeout shops, and ice cream stands dot the boulevard's west side. Among them are Dunkin Donuts, Kelly's Roast Beef, and Santorini. With inside and outside service, Santorini specializes in Greek dishes, including kebabs, souvlaki, grape leaf plate, and gyros.

How to get there: MBTA Blue Line to Wonderland station. Short walk to beach. One way from Boston: $1.25.

In terms of quick trips for city dwellers, Carson Beach is like Revere Beach in that it is less than a half-mile walk from the Red Line's JFK-UMass/Boston station. However, unlike Revere Beach, there are no places to eat and no ice cream stands lining the boulevard. Just one, the Seaside Cafe, sells chowder, hot dogs, hamburgers, and cold drinks at outside tables.

A concrete boardwalk borders the mile-long, crescent-shaped sandy beach that ends at the L Street Bathhouse. Visible across the bay are Thompson and Spectacle islands. Among the amenities is the Edward J. McCormack Bathhouse and Mother's Rest, a gazebo and grassy picnic area by the water. Lifeguards go on duty starting June 30.

For a break from swimming, ambitious walkers can follow the Day Boulevard sidewalk for about 2 miles past L Street to Castle Island, a historic fortification overlooking Boston Harbor.

How to get there: Short walk from JFK-UMass/Boston stop on MBTA's Red Line and Middleborough/Lakeville and Plymouth-Kingston commuter lines. Subway, $1.25 one way; commuter line, $3.25-$6 one way, depending on zone.

Newport and Middletown share the southern half of Aquidneck Island and have numerous beaches, though First and Second are the largest public ones served by the summer RIPTA trolley No. 61, which leaves from Newport's Gateway Visitors Center on the bay side of town. The trolley ride is about 10 minutes to the beaches on the ocean side of the island.

Easton's Beach sits below the start of the 3 1/2-mile Cliff Walk that winds westward in front of the Gilded Age mansions. It's a city beach with nearby residential neighborhoods and a small commercial district with the Inn at Newport Beach, Flo's Clam Shack, and other nearby places to eat. The Atlantic Beach Club and Pavilion is on the beach with volleyballers playing their games in front of the restaurant parking lot and outdoor patio. The dining room requires proper dress, but the patio has a takeout window with the usual Rhode Island fare, such as clam cakes and stuffed quahogs.

Among other beachside attractions are the New England Aquarium's Newport Exploration Center, a carousel, and outdoor showers and bathhouses. Beach chairs and boards are also for rent.

Sachuest is a city beach without the city because there's no development around it even though it's only 2 miles from Easton's. Instead of mansions, it is surrounded by the Norman Bird Sanctuary and Sachuest Point National Wildlife Refuge. High dunes, beach grass, and roses line the road and parking lot. The mile-long sandy beach is bookended by giant rock formations, and has basic facilities for showers and concessions.

If you're traveling with friends who don't want to hang at the beach, Newport has lots of diversions and restaurants. They won't be bored.

How to get there: RIPTA trolley No. 61 leaves from Newport's Gateway Visitors Center on America's Cup Avenue daily June 15-Aug. 28. Cost: $1.50 one way; $6 day pass for multiple on-and-offs.

You'll hear the waves before you see them at this Atlantic Ocean haven. When the water comes into view, little Rhody lives up to the Ocean State nickname. Even on the first Saturday in June, the late-afternoon sea breeze cooled walkers, but didn't deter swimmers and boarders from frolicking in the pounding surf. The sandy landscape changes daily because of the waves here.

Try our interactive map for more information on beaches that are accessible by public transportation at www.boston.com/travel.

Handsome North and South pavilions, gazebos, and observation tower provide a resort-style atmosphere. Free rest rooms and outdoor cold showers, and, for a small fee, hot indoor showers, are in each pavilion. A concrete boardwalk connects all the facilities.

Sailboats. Ferries. The Ledge Lighthouse. Dippin' Dots. They're all part of the entertaining scene at this popular 50-acre park at the mouth of the wide Thames River where it meets the ocean and Long Island Sound. The boats and ferries are in constant motion past the historic brick lighthouse as they head to and from New London and Groton.

Considered one of Connecticut's best public beaches, the complex also includes an Olympic-size swimming pool, 10 amusement park rides, playgrounds, a miniature golf course, even a workout center. Admission is $5; the rides and other attractions have additional charges.

The area behind the beach is an all-wood boardwalk for easy strolling, but you must wear shoes. The Sandbar Cafe sells hot dogs, hamburgers, pizza, hot pretzels, popcorn, and cold drinks. However, in a stand facing the parking lot is where you'll find Dippin' Dots, BB-sized beads of ice cream. They're fun to eat and they don't melt as quickly as scoops.

How to get there: Take Amtrak's Northeast Corridor trains from Boston's South Station to the New London transportation center, then take SEAT (Southeast Area Transit) Bus No. 13. Park is about 3 1/2 miles from the station. Greyhound buses from Boston and other Northeast cities also stop at Transportation Center. (Amtrak: 800-USA-RAIL, www.amtrakdowneaster.com, www.amtrak.com, $64 round trip; Greyhound: 800-231-2222, www.greyhound.com, $39.50 round trip, second person $19.75; SEAT: 860-886-2631, $1.10 each way, exact fare required.)

The easternmost town in Massachusetts is the place for pedestrians, not cars. Smart beachgoers arrive by bus or ferry at MacMillan Wharf, then hop a Cape Cod Regional Transit Authority Shuttle to Herring Cove and Race Point beaches, a pair of gorgeous sites in the 44,000-acre national seashore. The shuttle also stops at the Province Lands Visitors Center where one can learn about the area's fascinating geology, plant and animal life, and history.

It's quiet here, just sun and water. No resorts, spas, water slides, or amusement rides. Get away from it all and experience the landscape's special light that has always attracted artists.

Herring Cove is closest to town and provides the bare bones for a day at the beach. The weathered bathhouse blends with the beige sand and provides rest rooms, changing area, and showers. A concession stand sells foods on weekends and daily starting at the end of this month. A blacktopped path overlooks the sloping beach for walkers who don't want the sand running through their toes. Lifeguards are on duty here and at Race Point from later this month through Labor Day.

Race Point Beach is wide open, stretching out from some of the highest dunes. One has to navigate the shifting sands for the long climb. Like Herring Cove, Race Point has the basics: simple bathhouse and rest rooms. The Old Harbor Life-Saving Station Museum sits on a high point overlooking the wide Atlantic.

With limited food choices at the beach, one could stop by Townsend Lobster & Seafood Market on Fisherman's Wharf (parallel to MacMillan) for lobster rolls, chowder, and other prepared seafood to eat in or carry out. The market also has a ''Lobster Bake to Go" for $19.95.

Jan Shepherd is a freelance writer in Boston.