THIS STORY HAS BEEN FORMATTED FOR EASY PRINTING
heartbreak hill

Support for the runners was heartfelt 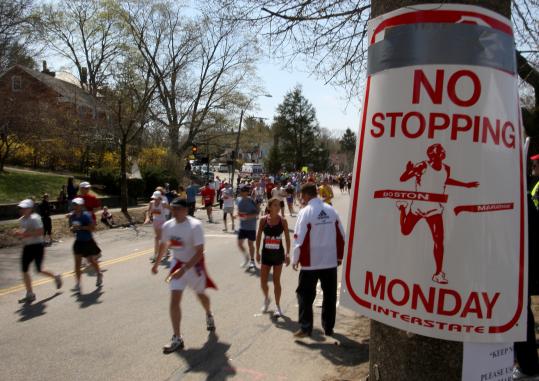 This sign on Commonwealth Avenue was intended for automobiles, but more than a few runners at the start of Heartbreak Hill ignored the order. (John Blanding/Globe Staff)
Email|Print|Single Page| Text size – + By Maggie Cassidy Globe Correspondent / April 22, 2008

NEWTON - For all the heartbreak at the intersection of Hammond Street and Commonwealth Avenue yesterday, there was also a lot of love.

Sign-toting spectators lined the Boston Marathon course at the infamous peak of Heartbreak Hill, an 80-foot ascent over a half-mile between the 20- and 21-mile marks. Some wrote their endearing messages on cloth ("Here comes our favorite science teacher"), others on cardboard ("Hey Dylan: Be the Ferrari"), and other messages - more motivational than heartwarming - were drawn with chalk on the road ("NO U-TURN").

But one sign was a little more heartfelt than the others: "Marry Me JPH."

Dressed in a black shirt and blue-jean capris, Roz Kierstead stood in the shade of a tree on Commonwealth Avenue about 30 yards before Hammond Street. Some of the elite runners had started passing by, and she sat down in her rainbow lawn chair to take the sign out of her tote bag.

"I expect him around 10 after 12," she said. "Seven minutes after Lance Armstrong."

Her short-but-sweet message was drawn on a white piece of cardboard with the "Basics" logo at the top. She had gotten it for free at the Hynes Convention Center Saturday when she and her boyfriend of 2 1/2 years, John Herron, arrived from New Brunswick to pick up his bib, No. 2264, for his sixth Boston Marathon.

And just hours before the race, on a whim, she decided what she would write.

"I always draw him up a sign with his name, and I needed something to write. Usually it says 'Run John Run' or 'Go John Run,' " said Kierstead, 40.

Yesterday it was a marriage proposal, with little pink flowers between the letters.

As Kierstead waited patiently, occasionally checking Herron's progress on her BlackBerry, other spectators proudly displayed their messages for loved ones who were trying to make it over the hump.

A few yards toward Hammond Street, Phillip Winston, 37, hoisted a large yellow sign with black letters reading, "Geaux Jeffrey." The sign was to cheer on his partner, Jeffrey Seal, a Louisiana State graduate running the race for the first time with the American Liver Foundation. The other side of the sign assured those with tired legs, "It's all downhill from here."

Several runners cheered the message, while one even stopped to take a picture.

"I used to run, and I wasn't a very good runner," said Winston, a South Boston resident who has stationed himself at Heartbreak Hill for 10 Boston Marathons. "So I'm just trying to motivate them to let them know it's all downhill from here."

Dorothy Liu, 19, and her boyfriend Geoff Dorenzo, 21, stood just past Hammond Street to cheer on Liu's siblings, Diane, 24, and Steve, 26.

"This is almost as tiring as running," joked Dorenzo as he held two wooden posts connecting a large green cloth decorated with pink glue. He, Liu, and Liu's mother, Mianne, had been following the course to cheer the siblings at different parts of the race, but agreed that Heartbreak Hill was an especially challenging checkpoint.

And at Hammond Street, 12 of Michael Nolan's family members - including daughter Sarah, 5; sons Dan, 13, and Sean, 17; and wife Kathy, 46 - stood waiting for him to pass by in his first Boston Marathon, after trying to qualify nine times.

His brother Kevin, a longtime marathoner, was to meet him at the foot of Heartbreak Hill and run with him past the peak for motivation, while Sarah sat on Kathy's shoulders with a big piece of cardboard she decorated in crayon: "Michael Nolan, Don't Stop!!!"

Meanwhile, Kierstead was ready with her proposal. At 12:13 p.m., she lifted the sign over her head. Some runners' eyes darted toward it and away; others saw the sign and smiled. Still, there was no sign of Herron - until about 10 minutes later, when he came running up Commonwealth Avenue and saw Kierstead under the tree.

He stopped, kissed her, and took off his shirt - all in a span of about 10 seconds - before resuming his up-tempo pace and leaving Kierstead smiling widely.

"That was the first time he's ever stopped during a race," she said, still grinning. "I have to rush off to the end to see if I can find him."