THIS STORY HAS BEEN FORMATTED FOR EASY PRINTING
LANCE ARMSTRONG

No pedals, he showed his mettle 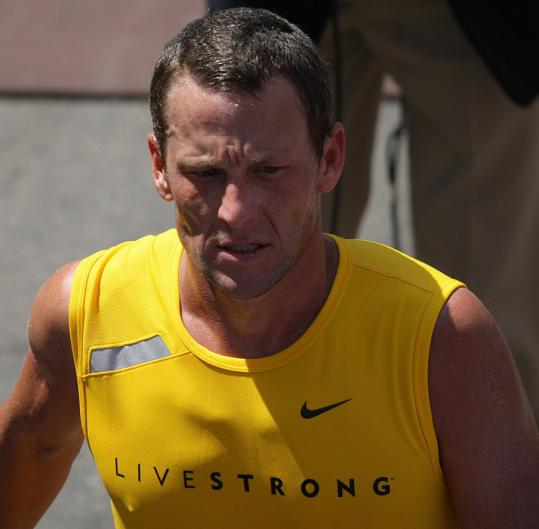 Lance Armstrong may have wished he had his bike once he hit the Marathon's treacherous hills, but he got over them and finished 496th. (David L. Ryan/Globe Staff)
Email|Print|Single Page| Text size – + By Michael Vega Globe Staff / April 22, 2008

"I feel better than the first New York, and probably not as good as the second New York, so my fitness was probably in line to indicate that," said Armstrong. "To me, it was a harder course than New York and, obviously, as everybody knows, it's much tighter, so you have a much different atmosphere - not that New York has a bad atmosphere.

"But this one is just louder and more intense. It plays well for all of the runners, not just the leaders and not just the people they were looking for in the middle. Everybody feels that."

As for a comparison between competitive cycling and marathon running?

"Not to diminish what the marathon means, but it is a hobby and it's something that keeps me fit on a daily basis, keeps me inspired and motivates me to go out and run.

"So every time I come out here, I swear to myself that I'm going to train harder for the next one and I never do. But one of these days I might listen to myself."

Armstrong, a cancer survivor, said his presence in Boston was in part to promote awareness for his Livestrong Foundation and its campaign against cancer.

"If I had to impart one message, it's to remind people of the impact of the disease, which is cancer," said Armstrong. "It takes roughly 560,000 American lives every year, 7 million people around the globe. It's a huge, huge emotional toll.

"We have neglected to really focus on it in our country. Livestrong means a lot to a lot of different people. It's nice to run with the so-called Livestrong Army and to see the Livestrong placards along the way."

While he's scaled more challenging heights in the Tour de France, Armstrong was surprised by his first encounter with Heartbreak Hill.

"Then I had this period where everybody seemed to talk them down - 'They're not that big a deal, running the hills of Boston; don't worry about it.' They were wrong. They are harder and they do come at a difficult time in the race.

"For me, it's hard to run on the downhills. Perhaps my body weight comes into play; 175 pounds running downhill really takes a toll on your muscles, and then all of a sudden you hit another uphill.

"Where's the flat marathons? Anybody know?"

No one had an answer. But there was another question: Does he plan to come back?

"Yeah, oh yeah," Armstrong said. "If they let me come back. But there's a lot of other reasons to come back.

"I really love the event, the spectacle of a marathon and the challenges of a marathon. This is a landmark event. This was a pleasant surprise. I was expecting a beautiful experience, but the crowds here made it 10 times what I expected."