THIS STORY HAS BEEN FORMATTED FOR EASY PRINTING
MEN'S RUNNER-UP

Bouramdane's effort speaks well of him 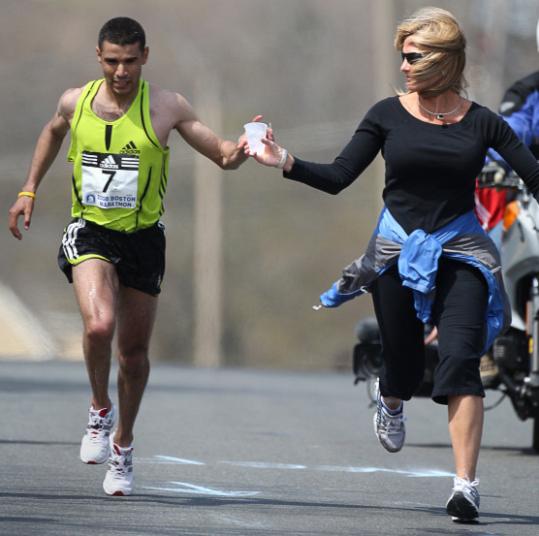 He apologized at first, saying his English wasn't so good. Then he indicated he was fluent in French and Arabic, for those in the media who were conversant in those languages.

No translation, however, was needed when Abderrahime Bouramdane, runner-up to Robert Cheruiyot in yesterday's 112th Boston Marathon, tried to illustrate the pain he endured from the 18-mile mark to the end of the race.

When he removed his right shoe, it became clear Bouramdane was talking about his "sock," as he revealed a nasty red blister on the inside of his big toe. Evidently, the blistering 4:37 mile split Cheruiyot threw at the field at the 18-mile mark was enough to knock Bouramdane's socks off.

The 30-year-old Moroccan, who was making his Boston debut, was unable to keep pace. Worse, he had to endure an 8-mile torture test through the hills as his sock slid off his ankle and past his heel, before gathering around his toes at the end of the race, causing the blister.

But Bouramdane wasn't about to let his wardrobe malfunction dampen his second-place finish - in 2 hours 9 minutes 4 seconds - in his first Hopkinton-to-Boston trek.

Not to mention his sock.

Khalid El Boumlili, Bouramdane's countryman, was similarly pleased with his third-place finish, a marked improvement over three years ago when he was forced to abort shortly after the 15-mile mark.

"This is my first finish here in Boston," said El Boumlili, who finished in 2:10:35. "I set my personal record here today and I'm very happy for the performance."

Bouramdane felt he solidified a spot on Morocco's Olympic team with his gutsy performance, which fell just shy of his personal best (2:08:20). "I think I will go to the Olympics and I will try my best there," he said. "Today was a very big race because of the big five marathons and I scored some big points."

Then he scored some more when he thanked John Hancock and the Boston Athletic Association for inviting him.

"I would like to congratulate Robert Cheruiyot," Bouramdane said. "He's very, very strong. It was a strong course and a strong marathon. I am very happy. Next time, I will try to have the honor of first place."

No translation needed there.