Mewis sisters offer glimpse into future for US soccer 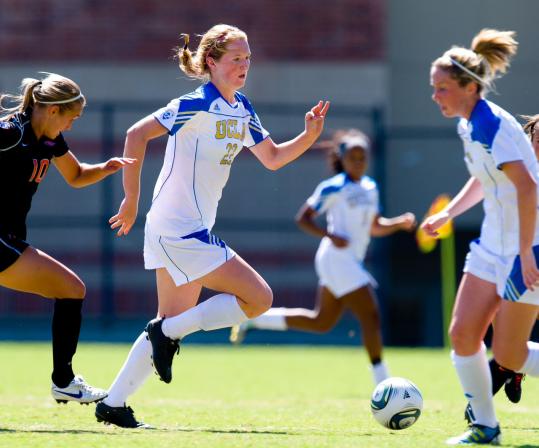 The biggest stars in US women’s soccer took center stage at the Summer Olympics in London, where they led the red, white and blue to the gold medal with a 2-1 victory Thursday against Japan.

More than just talented, the team that has proved to be the class of the world is also marketable and easy to recognize.

Abby Wambach flies through the air with such power it’s hard not to wonder whether she could tower over some of the best male players and win a 50-50 ball. Megan Rapinoe’s  bleached-blond hair, distributing ability, and intelligence for the game could be noticed on even the smallest of televisions.

And Alex Morgan, the youthful forward who can’t stop scoring goals, is drawing comparisons to Mia Hamm while piling up endorsement deals and appearing in Sports Illustrated’s swimsuit edition.

But with the Olympic competition over, it’s not too early to wonder what’s next.

Looking into his crystal ball, UCLA coach B.J. Snow says two of the biggest emerging stars in the United States are sisters from Hanson who are getting ready to kick off their fall collegiate seasons.

Snow gets giddy talking about UCLA sophomore Saman­tha Mewis, with her 5-foot-11 frame, buttery-smooth touch with the ball, and the ability to finish and distribute equally from the center midfield.

And then there’s Boston College senior Kristen Mewis, with her incredible knowledge of the game, speed, power, defensive prowess, and a shot that could tear through the netting.

Samantha doesn’t turn 20 until October, and she’s logged just a single year of collegiate competition. But she’s already proven herself at the international level playing with the under-17 US World Cup team, and is about to get another chance with the national squad in the under-20 World Cup in Japan starting next weekend.

“I hate to use the word potential, but she’s still figuring out her game,” said Snow, who coached both sisters as an assistant for the national under-20 team in 2010. “Sam is such a unique player with such a tremendous upside that makes her really, really special.”

Samantha was traveling with the team and couldn’t be reached for comment, but when Snow tried breaking down her game, explaining what makes her so special, he had a hard time deciding on her biggest strength. She has too many.

“She brings athleticism and great size with tremendous technical ability all wrapped up into one player,” Snow said. “When you have a girl nearly 6 feet tall that has the technical ability of any of the best center midfielders in the country — well, we’ve never seen a player like that in America.”

The hardest part for Samantha, and her coaches, has been trying to figure out what kind of player she’s going to be. While she has so many abilities, and she can play upwards of six positions exceptionally well, trying to find just one role for her is nearly impossible.

And when she’s switching positions with each team she plays on — and making the transition look seamless — it makes things even more difficult.

With the American squad, Samantha will likely be used as an in-between midfielder, playing both sides of the ball and acting as a force from end to end.

With UCLA this fall, Snow said, he expects Samantha to play more of an attacking role in the midfield because of her ability to finish. Snow just wants her in a position where, if she gets a few feet of space, she can have a go on net. It may not be the ideal spot, but anywhere on the field works.

Meanwhile, sister Kristen has been gearing up for her senior season at Boston College before she graduates in December and turns her passion into a career.

Kristen has already started to make a dent in the national program, earning an invitation to training camp with the women’s squad in May and nearly making the cut for London. While it may be intimidating lining up against the likes of Wambach and Rapinoe, it’s also a sign of faith from US coach Pia Sundhage, who has been public with her praise for a player considered one of the country’s best young prospects.

“It’s tough, obviously,” Kristen said of the heavy expectations, particularly when she returns to the B.C. training grounds as a celebrity.

“You have all eyes on you and you’re expected to be the best and do everything right. But I wouldn’t trade it for anything,’’ Kristen said. “That’s my ultimate goal and that’s my sister’s too — to have a place on the national team. It’s tough at times, but I think it’s worth it at the end.”

Samantha won’t return to UCLA until mid-September, when the Bruins will have already played more than a third of their schedule.

And Kristen will try to make the transition from a young, quiet player with the US team to her role as senior captain for the Eagles as they contend for a national championship.

There’s chaos, pressure, and a lot of time spent on an airplane.

But for the Mewis sisters, it’s just another fall.