Another Heinsohn stands tall - in goal 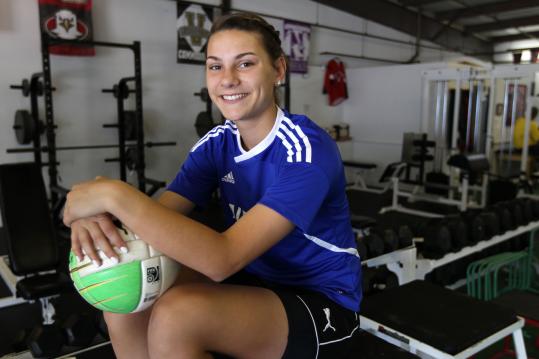 Norfolk teen Brooke Heinsohn, working hard toward her dream of playing in the Olympics, recently took part in an invitation-only camp for the US 14-under program. (Bill Greene/Globe Staff)
By Lenny Megliola Globe Correspondent / July 5, 2012
Text size – +

Tommy Heinsohn was in Philadelphia in May for a Boston Celtics playoff game against the 76ers.

The Celtics legend, an analyst on the team’s television broadcasts for 30-plus years, is used to being recognized.

A man came up to him and mentioned the name “Brooke Heinsohn.’’ Tommy was taken aback.

“I told him that’s my granddaughter, and he said ‘I know.’ He was an international soccer writer. He had Brooke scoped out.”

The soccer world identifies potential early. Brooke is a 6-foot goalie from Norfolk who recently returned from the US women’s 14-and-under soccer camp in Carson, Calif. She was one of just 48 invitees. Four were goalkeepers. She is waiting to hear whether she’ll be invited to the team’s next camp.

“To get invited she obviously caught their eye,” said Chris Hamblin, who coaches Heinsohn on an elite team with the New England Futbol Club, based in Marlborough. “It's an incredible honor and opportunity for her.

“Brooke has an incredible future. She’s already gotten the attention of some colleges.”

Hamblin, a Newton resident, was an All-American keeper for Boston College, and is an assistant women’s coach at Harvard.

While Heinsohn has lofty goals, like making the US Olympic team, Hamblin said, “she's beginning to understand the nuances of the game. She has a long way to go. But she’s on the right track.”

Heinsohn, who will attend the Rivers School in Weston this fall, got an ear and eyeful at the camp in California.

“I expected everyone there to be the best players I’ve seen in my life, and it was true,” she said.

She filled a notebook of things the coaches suggested she work on. One of the major issues was “my left foot. It’s terrible. When I kick it’s usually with my right foot. I’ve been working on my left foot since I came back.”

Practices lasted two hours. In game competition against older players, she said, “I thought I did pretty well.

“At halftime the coach gave me some things to work on. I was happy the way I did them in the second half.”

Brooke is the top goalkeeper in the development program, according to its coach, David Suvak. “She’s tremendous. She should be looked at for the national team’’ in her age group, he said. “She’s of that caliber.”

One might think that Brooke, whose father, Paul, is about the same height as his famous father, would have basketball leanings. She did play hoops for two years at Mount Alvernia High in Newton. “I actually played point guard,” she said, and wore No. 15, the same number that hangs from the rafters at TD Garden to honor her grandfather.

But soccer had a stronger grip. “All of a sudden Paul and his wife got her involved with it,” said Tommy Heinsohn.

“In the third grade, I was a field player,” said Brooke. “I wasn’t a goalkeeper until sixth grade. My grandfather always told me to love the sport you’re playing.”

That was easy for her.

Hamblin has coached Heinsohn for the past three years.

“He told me that Brooke may be one of the best goalkeepers he has seen at that age,” said Paul Heinsohn. “I try not to put a lot of pressure on her, and let it just grow organically. She’s a driven kid. When she was 11 she said, ‘I want to make the US national team, go to Duke, and be a cardiothoracic doctor.’ ”

Her father, who grew up in Natick, attended Catholic Memorial in West Roxbury, and played football at Duke. Her mother, Carmel Heinsohn, is the medical director at Bournewood Hospital in Brookline.

Brooke is still focused on her goals.

“We had a career day when I was in sixth grade,” she recalled. “I told them I wanted to be a doctor. And I still want to go to Duke.”

Her parents met there, and she will attend a soccer camp on Duke’s North Carolina campus this summer.

“Brooke has always been athletically gifted,” said Hamblin. “She’s tall for her age and has great physical presence. You know when she’s in a game. She has the ability to kick, throw and start attacks.”

Paul Heinsohn, 52, runs an AAU basketball team. When his father played for the Celtics, he attended a lot of camps and met legendary coaches like Red Auerbach and Dean Smith. His education in the game had begun.

The US national 14-under team will hold two more camps this summer. Players who advance may move on to international competition. “I look forward to it,” said Brooke. “My goal is the Olympics.”