THIS STORY HAS BEEN FORMATTED FOR EASY PRINTING
Union 3, Revolution 0

Nothing doing for Revolution

Nicol rips the effort of his team during 1st half 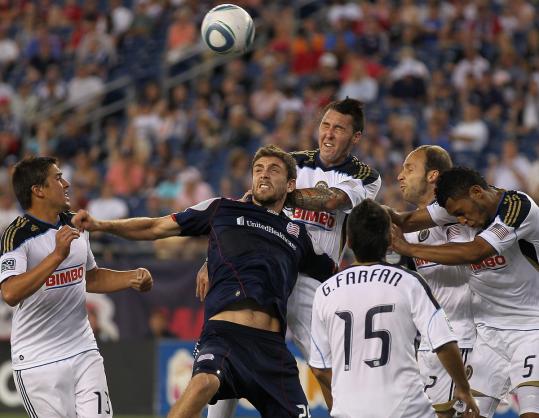 Stephen McCarthy of the Revolution is well covered by a together band of Union defenders last night at Gillette Stadium. (Jim Rogash/Getty Images)
By Frank Dell’Apa Globe Staff / July 18, 2011

FOXBOROUGH - Coach Steve Nicol called the Revolution’s first-half performance in a 3-0 loss to the Philadelphia Union last night “the worst since I’ve been here.’’ The Revolution did improve in the second half, but not enough to halt their winless streak before it reached nine, tying a team record.

The Union (8-4-7, 31 points) scored twice in the opening half, then, playing with a man advantage after Benny Feilhaber was red-carded, added a late goal from Dorchester’s Sheanon Williams.

“It was like watching a bunch of schoolboys,’’ Nicol said of the Revolution in the first half. “As bad as we were, if we didn’t give the two goals away we may have gotten in nil-nil. But we didn’t deserve it.’’

Mapp was left isolated on A.J. Soares, crossing to Keon Daniel at the back post, Ruiz then volleying Daniel’s header from just outside the goal area. Valdes got a half volley from about the same spot, this time off a Sebastien Le Toux header from a free kick.

“The two goals are basic stuff,’’ Nicol said. “It’s page one, rule one. Set piece, pick up your man. We don’t pick up our man, what do you expect is going to happen when you do stuff like that?

“We’ve been pretty much like that all season. We haven’t done the basics of the game well. A successful team, at the very least they do the basics well, and then they add their own quality on top of that. We, individually, aren’t doing the basics well and then it’s a domino effect after that.’’

The Revolution (3-9-7, 16 points) gave a spirited performance in their last game, a 3-3 tie at Real Salt Lake. But last night they were missing defender Ryan Cochrane and captain Shalrie Joseph (both suspended), and the lack of leadership was apparent.

“We talked before the game,’’ Nicol said. “It doesn’t mean you go around kicking people and fighting people, it means you do the basics well. And to do that, part of playing the game is communication. So, when you have nobody on the field talking, particularly when you’re under pressure, then it becomes twice as hard.

“At halftime they got a roasting and the second half we changed it and put up a bit of fight. Obviously, Benny getting a red card totally kills that. Not that we were playing like superstars, anyway, but we were actually competing, we were actually in the game. Had we snuck a goal, we might have stolen something from the game but, obviously, the red card makes that impossible.’’

The Revolution switched to a 3-5-2 alignment after halftime, and the change nearly paid off in the early going. Stephen McCarthy volleyed high (47th) and Chris Tierney slammed a close-in shot off the crossbar (51st), running onto a Zak Boggs cross.

“Even when things aren’t going well, normally we make it difficult on the other team,’’ midfielder Pat Phelan said. “But coming out the way we did, we can’t expect that to happen. We’re down in the dumps right now. Looking forward to the next three games it’s a big, uphill climb. The biggest thing is just the mentality, the attitude coming out, that’s got to be better.’’

“They’re professionals, they’re getting paid to be professional,’’ Nicol said. “Other than that, we need to see what’s inside them. It’s heart, as well. Having ability and all those other good things is fantastic, but if you don’t have the heart to fight for yourself or your teammates . . . so that’s what we’ll see on Wednesday, we’ll see what you’re made of.’’