This move paid off

Larentowicz hit it big with Rapids 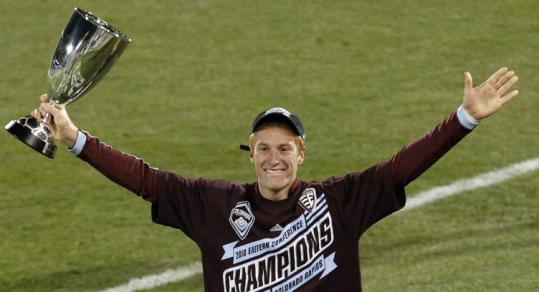 After losing in the MLS Cup final three times with the Revolution, Jeff Larentowicz won a title with the Rapids. (Jack Dempsey/Associated Press)
By Frank Dell’Apa Globe Staff / November 26, 2010

Jeff Larentowicz seemed destined to be part of an MLS Cup champion, but he wasn’t thinking he would have to move halfway across the country to find that team. Larentowicz performed in three MLS Cup finals with the Revolution, then was traded to Colorado in the offseason following a contract dispute. And on Sunday night in Toronto, Larentowicz won the MLS Cup as the Rapids took a 2-1 victory over FC Dallas.

“It was kind of strange, it still hasn’t sunk in,’’ Larentowicz said before attending a celebration event in downtown Denver. “My initial reaction was satisfaction. It really seemed like where the team was heading we would end up winning. We were playing well and winning games the last couple months.’’

“I’ve seen it all — we lost in overtime, we were winning in regulation time and lost, winning in overtime and lost in penalties,’’ said Larentowicz, whose Rapids beat FC Dallas on an own goal. “I fully understand what Dallas is going through. It seems like it’s in your grasp and it’s gone.’’

Larentowicz played out his contract with the Revolution and began checking options in Europe last year. The combination of stalled contract talks and the Revolution’s need for a goalkeeper led to Larentowicz and Wells Thompson being sent to Colorado for Preston Burpo and defender Cory Gibbs. The deal paid off for the Rapids, Larentowicz complementing Pablo Mastroeni in midfield, as he had Shalrie Joseph with the Revolution.

“I don’t have any regrets,’’ Larentowicz said. “It just seems a fact of life that at some point you move on from certain situations. I miss my friends and everyone I know, and the life I built in five seasons with the Revolution and in college. But I’ll always have a base there and I thought it could be a good time to create new opportunities.’’

Larentowicz said he learned from the experiences of teammates who were dissatisfied with Revolution contracts.

“Teams have decisions to make on players and players have decisions to make for themselves they have to feel comfortable with,’’ Larentowicz said. “Over time, [the Revolution] weren’t doing right by their players. I watched a lot of talented players and friends go and a lot seemed unhappy who were still there. I was talking with Taylor Twellman the other day and we were wondering what would have happened if we had won one of those, would they have had the incentive to keep those teams together?’’

Larentowicz was on the verge of signing a standard four-year contract with the Revolution before the 2009 season.

“I was as close to signing as you can be but I just had a moment of clarity and decided not to at the last minute,’’ Larentowicz said. “I angered a few people by doing that. But it’s my right. The offer seemed good at first, in comparison to what I was making, but I knew I could be worth more. Then, the last months I was there it was clear they weren’t interested in finding my true value, they wanted a bargain or a price they were comfortable with.

Larentowicz grew up in Pennsylvania and has struggled with the lifestyle change of the Rockies, but he is comfortable with the Rapids’ setup at Dick’s Sporting Goods Park.

“It makes a ton of difference. You walk into a stadium every day and know it’s your place and you take precedence over everything else,’’ said Larentowicz.

“[In New England] we had a great practice field and locker room, but we were, rightfully so, second fiddle to [the Patriots]. Here, we have 25 practice fields and one which they keep absolutely pristine only for us. It’s all about us.’’