THIS STORY HAS BEEN FORMATTED FOR EASY PRINTING
Soccer notebook

His Cup runneth over

Games are done in South Africa, but Kraft revved up 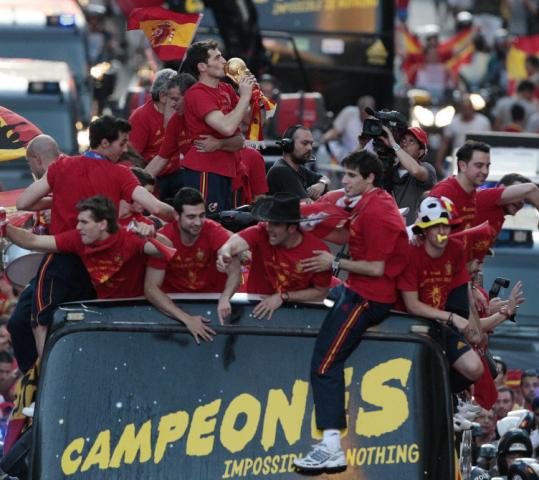 While viewing Spain’s victory over the Netherlands in the World Cup final Sunday, Robert Kraft’s thoughts went back to July 9, 1994. That was the last of six World Cup games held at Foxboro Stadium, Italy taking a 2-1 victory over Spain.

When Kraft invested in the stadium in 1988, one of his first directives was to secure approval as a venue for the World Cup. It was an uphill battle. Former stadium manager Brian O’Donovan had acted unilaterally to nominate Foxboro Stadium, but it had been crossed off the preliminary list, partly because of the artificial turf surface. Kraft’s commitment revived the bid.

“We were the last stadium to be chosen,’’ Kraft said yesterday. “If you think about it, six games were held in the old stadium — out of 52 games, 10 percent of the World Cup was played here — that was a great sales job.’’

The Kraft family viewed Sunday’s final on Cape Cod. A couple decades ago, they might have been in the minority among US families in terms of interest in the World Cup.

“Our family loves sports, sports are part of the global community and the fabric of life,’’ Kraft said. “And the World Cup is unique. I was a little disappointed, the game was not as thrilling — I know how the American fan base thinks, and it was not the kind of game most Americans want to see.

“I just wish it was a little more exciting. The US-Ghana game got 19.5 million viewers and that was more than watched the NBA Finals and three times the Stanley Cup finals, so think about what that means, vs. four years ago — ratings are up 30 percent, and I think there are a lot of viewers not reported, to be honest.

“And you saw all the people in the squares in Amsterdam and Madrid, hundreds of thousands of people all coming together. Sort of like our first Super Bowl, the coldest day of the year and we have 1 1/2 million people on the streets of Boston, a city of 600,000 people. This is the global sport. You have all ethnic, racial, and economic backgrounds, all together. It’s great for Spain, given their economic problems, it binds people together, helps the social fabric of the community. In the world we live in, the more ways we can build bridges and find ways for different cultures and backgrounds to learn to live together — this brings people together like no other sport.’’

The success of the ’94 World Cup led to the start of Major League Soccer two years later. Kraft retains strong emotions regarding the Revolution, a team that has provided him with as much frustration as satisfaction.

After the Revolution’s 2-0 victory over the Los Angeles Galaxy before 20,000-plus fans Saturday night, Kraft felt a sense of relief, and also a validation of his belief in professional soccer.

“Here’s the deal,’’ said Kraft after the struggling Revolution knocked off the MLS-leading Galaxy. “Take our record over the last 10 years, wins and losses, we are in the top two or three teams. I’m not happy with how this team is performing [this season], but getting three points Saturday night was really good. We have some bad circumstances — Taylor Twellman and other injuries, we had Shalrie Joseph out for a while.

“We don’t think we’re out of the playoff picture. [Sainey] Nyassi, the way he played — they played their hearts out Saturday night. Believe me, we’re on top of it. Our cap space is tight but I think you will see a signing here in the next week or two.’’

Whoever the newcomer is, he will not likely be of designated player caliber, someone who would be paid outside the salary cap limits.

“There is a time and place for that,’’ Kraft said. “In the end, we want to win — we’re not trying to just get headlines. I learned from the NFL, there are ownership groups who want to make headlines, but we need guys who can help us win. It’s like anything else, it’s chemistry — football and soccer are the same, you need to play together as a team. Look at Sunday’s game, the score was 1-nil, but look at how many small things made a difference.’’

Kraft is committed to finding a location for a soccer-specific stadium.

“We know eventually we will have a soccer-specific stadium,’’ Kraft said. “There are a lot of different alternatives we are considering. It’s timing and location. Probably an urban setting is where it belongs. Believe it or not, people are coming to us from all over the New England region, from different urban settings, and we’re just trying to figure out where the best location is. Good public transportation is important. Financing is not the problem. I think it’s finding the right location. This is a permanent decision. I have a saying, that you measure nine times and cut once. You have the material to make a dress or suit, this is a custom-tailored operation, and when you cut the cloth it’s going to be something that will fit. We are not under the gun, so we are going to do the right thing.’’

Fun and games
A mark of World Cup championship teams is a capacity to remain composed in pressure-packed situations. One of Spain’s training sessions before its semifinal victory over Germany illustrated how the Spanish team coaches took the edge off the tension. The scene: Princess Magogo Stadium, home of AmaZulu FC, in the KwaMashu District north of Durban. The players spent about 20 minutes informally taking free kicks and playing one-touch passing games in triangles, then in a large circle. Then, the goalkeepers went off to drill against corner kicks and the field players gathered at the opposite end of the field.

What followed seemed to have little to do with soccer, or modern competitive sport of any kind. First, there seemed to be a sort of “tag-you’re-it’’ game. That was followed by another chase game, an assistant coach making a signal that required players closest to each other to pair up — the odd man out then was designated by having to do three push-ups. The Spaniards looked like a bunch of kids out for recess. They did not appear to be a group carrying the burden of decades of failed expectations, a group preparing for one of the most difficult games of their lives.

It is difficult to imagine many other national teams prepping for the World Cup semifinals with such informal, playful activity. Brazil is the only team I have seen use such training methods. While Brazil was preparing for the ’94 World Cup, it conducted what we used to call a “monster’’ chase game, a version of tag in which the “it’’ person is required to cross arms, cupping one hand over the face, extending the other like a claw. The Brazilians also do a version of ring-around-the-rosy, with players skipping around a circle. The one Brazil practice I witnessed in Johannesburg this time did not include anything like this; there was the usual keep-away stuff, a fascinating exercise in the Brazilian way, plus a lot of crossing and finishing drills. It was not surprising that Brazil seemed uptight. And, it is interesting how Brazil and Spain responded to the Dutch attempts to provoke. Brazilian players, especially Felipe Melo, lost their composure, the Spaniards remained calm and confident.

Spanish connections
Administrators and coaches have attempted to develop relationships with Spanish soccer, but there have been few successful connections between MLS and La Liga. Former Revolution coach Fernando Clavijo made some of the strongest connections with Spain. In 2000, Clavijo brought in Jose Luis Morales, a 5-foot-8-inch forward who developed in the Real Madrid system. Like many Spanish national team members, Morales was a technical player, his skillful touches bringing an important dimension to the game. Morales scored a second-half goal against D.C. United to clinch a playoff spot at a time when qualifying for postseason play was a difficult objective for the Revolution. The next season, Clavijo brought in Nacho Conte, who had one appearance with La Furia Roja, but the league’s foreign player limit prevented the acquisition. In Colorado, Clavijo added defender Aitor Karanka, now a top assistant coach at his old club, Real Madrid, under coach Jose Mourinho. Former Barcelona midfielder Albert Celades played 17 games last season for New York.