THIS STORY HAS BEEN FORMATTED FOR EASY PRINTING
World Cup Notebook 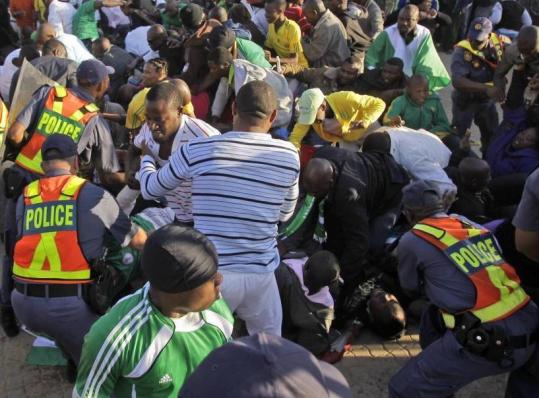 Thousands of soccer fans stampeded outside a stadium yesterday in Tembisa, South Africa, before an exhibition game between Nigeria and North Korea, leaving 15 people injured, including one police officer who was seriously hurt.

Several fans fell under the rush of people, many wearing Nigeria jerseys. Makhulong Stadium in the Johannesburg suburb seats about 12,000. The mayhem happened five days before the start of the World Cup, the first to be held in Africa.

“At this moment we have 14 civilians that were slightly injured in the process, one policeman seriously injured,’’ police spokesman Eugene Opperman said outside the stadium. The injured were being treated at a hospital, he said.

Opperman said tickets for the game were given out for free outside the stadium. “What then occurred was large groups of people gathered outside the gates wanting to come in and wanting to get free tickets. Unfortunately in the process, the gates were opened and there was a stampede,’’ Opperman said.

Soccer’s international governing body said it had nothing to do with the ticketing. Police spokesman Hangwani Mulaudzi added that because this was an exhibition game, the Nigerian team — the designated host — was responsible for security, not World Cup organizers. Once trouble broke out, he said, police stepped in.

Altidore tests ankle
US star forward Jozy Altidore ran sprint after sprint while a fitness coach looked on. Altidore was held out of Saturday’s exhibition win over Australia, three days after spraining his right ankle in training, and he tested the joint as the Americans held a light workout at Pilditch Stadium in Pretoria.

“Jozy has been able to add to his workload every day, which has been positive,’’ said coach Bob Bradley. “We are pleased with his progress and will continue to move him forward.’’

If Altidore isn’t healthy for the US opener against England Saturday, options have emerged. Edson Buddle scored his first two international goals against Australia. Herculez Gomez got the other goal, his second in the two Cup warm-ups he’s played. Speedy Robbie Findley has show he can stretch the defense.

Brazil plays it safe
Brazil will be without goalkeeper Julio Cesar (sore back) when it faces Tanzania in its final warm-up today, and coach Dunga may rest other starters to protect them. Brazil has had some injury scares since arriving in South Africa and there are fears the final match could cause more problems for the five-time world champion. Left back Michel Bastos hurt his right ankle at practice and will see just limited action . . . Netherlands coach Bert van Marwijk said star winger Arjen Robben is likely to rejoin his teammates because his left hamstring injury isn’t as bad as initially feared . . . About 5,000 fans created a party atmosphere in Pretoria when Diego Maradona and Argentina’s national team made their first public appearance since arriving in South Africa. With Argentine flags waving, along with many South African flags, the 1986 World Cup-winning captain was serenaded with chants of “Ole, Ole, Ole, Die-go, Die-go.’’