Taking steps to ensure the fix isn’t in 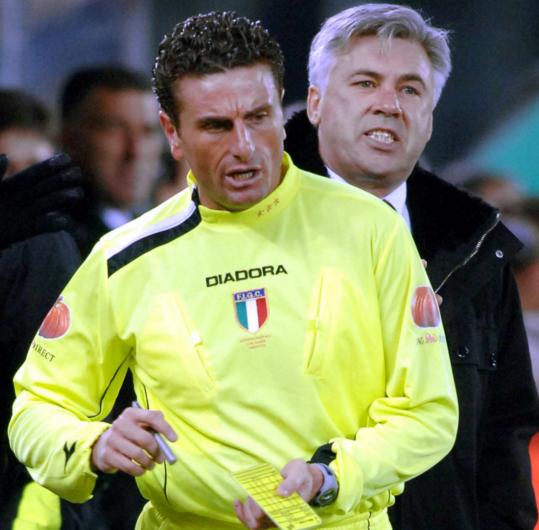 GENEVA — The World Cup marks the climax of a season in which match fixing has spread more widely through soccer than ever.

Clubs and officials in at least 12 European countries — four of whose national teams will line up in South Africa — are under scrutiny in the continent’s biggest soccer corruption investigation, being led by police in Germany.

Michel Platini, the president of Europe’s soccer authority, UEFA, even told lawmakers in Brussels last month that the sport is in “mortal danger.’’

In an unexpected and embarrassing distraction before the June 11 kickoff, FIFA is investigating accusations that danger lies within the soccer family. Its ethics committee is examining claims by a senior English official that Russia, which did not qualify for the World Cup, could help heavily favored Spain bribe World Cup referees in exchange for support for its own bid to host the 2018 finals. The official, chairman of the English soccer federation David Triesman, resigned his post after his private conversation was revealed in a newspaper sting.

FIFA wants that probe completed before the first ball is kicked, so no taint of high-level corruption lingers on the sport’s most-watched event.

To keep outside criminal elements at bay, FIFA has created a spinoff company called Early Warning System aimed at monitoring wagering on games. EWS was not in place for the 2006 tournament in Germany.

FIFA also is setting up a hot line for players and referees to report sinister offers.

Yet underlying FIFA’s approach is the reasoning that match fixing is most likely to happen where players and officials are little scrutinized and poorly paid — such as eastern Europe — and organized crime has access to teams. The reasoning: Only those with little to lose will risk being banished from the game for a payoff that is typically just a few thousand dollars.

FIFA president Sepp Blatter believes the economics of the World Cup, a tournament that has prize money and attention lavished on well-paid players and officials, is safe from the match-fixers.

“We are really today . . . alarmed if something should happen,’’ Blatter has said. “But I think personally, to try to get into the World Cup, I think people will not do it.’’

Still, corruption previously has cast a shadow on soccer’s showcase event, which will generate around $3.4 billion for FIFA.

A match fixing and betting scandal in host Germany marred preparations for the 2006 World Cup. Referee Robert Hoyzer was jailed, and members of the Croatian crime syndicate behind that scam have been arrested in a current German probe.

Italy won the World Cup four years ago just as a scandal was unfolding at home that attracted worldwide scorn. Senior federation and club officials were banned from holding office after it was revealed they arranged for referees favorable to certain teams to get key domestic matches.

In the fallout, referee Massimo de Santis was removed from World Cup duty weeks before kickoff.

Blatter said then he feared referees were a tempting target for fixers, and wanted to raise their salaries and professional standards. The 30 referees and 60 assistants on World Cup duty will be closely guarded at their hotel near Pretoria.

The latest UEFA probe has led to lifetime bans for referees from Bosnia and Ukraine for conspiring with criminals to fix matches in betting scams. Both refs were rated highly enough to take charge of World Cup qualifiers.

Four years ago, Blatter was criticized for not addressing potential threats to FIFA’s flagship event, perhaps even disregarding the danger so as not to attract unwelcome attention.

Since then, he has spurred the EWS’ creation, which uses information gathered from nearly 450 legal gambling operators whose business is worth $20 billion annually.

If EWS raises a red flag, even in the hour before kickoff when most wagers are placed, FIFA can “inform the teams, postpone the match, or exchange the referee,’’ the governing body said in an e-mail.

Last December, Blatter announced in Cape Town two days before the World Cup finals draw that FIFA had joined global police agency Interpol to set up a task force to coordinate the fight against illegal gambling in soccer. Details of the task force are still being worked out.

In Ghana, a powerhouse in age-group soccer that has reached its second straight World Cup, officials have seen the would-be fixers in action.

“Those people exist anywhere and that’s why you have scandals all over,’’ Ghana federation spokesman Randy Abbey said. “We are mindful of that and so we are always on our guard to ensure that we do not let anything untoward happen as far as our team is concerned.’’

FIFA said this World Cup will be the first tournament with a corruption hot line.

In so-called “spot-fixing,’’ pieces of a match can be broken down and gambled on without necessarily affecting the result, allowing a match winner to be in on a fix. A corrupt referee, for instance, can arrange to award a certain number of penalties or yellow cards.

UEFA, at the urging of Platini, found plenty of trouble when it went looking for it. The governing body says it now invests “several million euros’’ each year in its own investigation unit, and a betting fraud detection system that monitors 29,000 matches each season.

Within months of strengthening that unit last year, UEFA and a police fraud team from Bochum, Germany, found evidence of the biggest nest of corruption the sport has seen.

The fix appears to have been in on domestic league matches in World Cup entrants Germany, Greece, Slovenia, and Switzerland, plus Austria, Belgium, Bosnia, Croatia, Hungary, and Turkey.

The full scale of the apparent fixes is still unfolding.