THIS STORY HAS BEEN FORMATTED FOR EASY PRINTING
Crew 3, Revolution 2

Some gains in a loss

Revolution push Crew to the limit 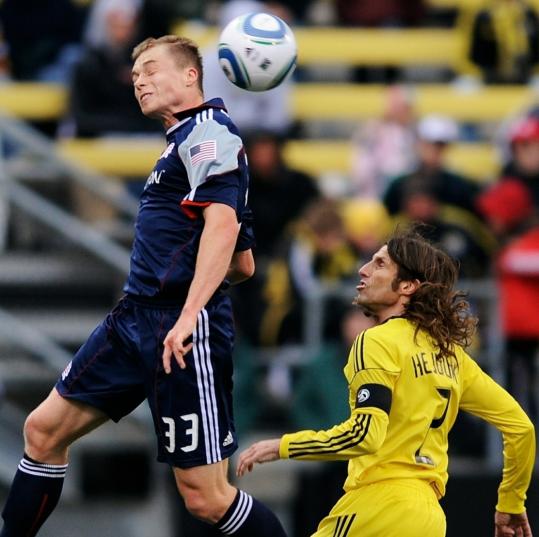 COLUMBUS, Ohio — The Revolution proved a point last night. But they failed to earn a point, surrendering an injury-time goal to Robbie Rogers in falling to the Columbus Crew, 3-2.

The Revolution (2-5-1, 7 points) extended their winless streak to five games, but for one of the few times this season they were able to remain composed offensively, hold possession, and remain compact. After seeming to become more and more disorganized, then losing three players to red cards in two games, the Revolution recovered with a surprising performance.

Zak Boggs scored his first two goals as a professional, giving the Revolution the lead in the 29th minute, and tying the score in the 40th. Boggs nearly regained the lead, barely missing wide in the 79th minute, then the Crew converted the deciding goal off a scuffed goal kick by Preston Burpo in the 91st minute.

“I’m not surprised, no, I thought it was an inspired performance,’’ Revolution midfielder Pat Phelan said. “I think for 91-92 minutes we stuck to our game plan and did our job. To be honest, this hurts more than getting blown out.

“I thought we deserved a point. We dodged some bullets but I thought it was a much bigger step in the right direction than from the last few games, so we’ll take the positives with the negatives.’’

The Revolution, aligned in a 4-5-1, aggressively shut down the midfield and defended patiently. The tactics stifled the Crew for much of the first half, and the Revolution threatened on counters. Boggs scored with his first attempt, a dipping 25-yarder that slid between William Hesmer’s arms and trickled into the goal. Khano Smith started the scoring sequence, finding Boggs from his left back position. Boggs, starting on the left wing, then played a give-and-go with Kheli Dube on the left wing, cutting in near the top of the penalty area.

Columbus retaliated, Eddie Gaven capitalizing on a short clearance by Cory Gibbs to tie the score (31st minute), then Gibbs slid to deflect a Rogers cross for an own goal (35th).

Boggs tied it five minutes later, this time finishing a sequence that began with a throw-in. Phelan won a header, then Boggs played the ball to Phelan, who one-timed a pass to Dube on the edge of the penalty area on the left. Dube found Boggs cutting across the penalty area and he slotted a low shot to Hesmer’s left.

“As you see, he’s got a little more to his game,’’ coach Steve Nicol said of Boggs. “He’s strong, powerful, finishes well. The second goal was a fantastic goal.’’

The Crew added a third forward, Jason Garey replacing defender Gino Padula in the 71st minute. But the Revolution absorbed pressure and countered. Sainey Nyassi broke through, but was held up by Adam Moffat, who was cautioned in the 77th minute. Two minutes later, Boggs controlled a long clearance, took a return pass, and barely missed wide.

That led to a frantic finish.

Guillermo Barros Schelotto released Frankie Hejduk in the penalty area, but Steven Lenhart went wide (85th). Dube then sent a bicycle kick toward goal (86th), with Phelan finishing at the back post, appearing to break the tie, but he was ruled offside. Gaven hit the bar (89th) off a corner. Then, with the Crew anticipating a short goal kick, Barros Schelotto lofted the ball to the right post. Darrius Barnes’s clearing header was off the line and Rogers finished into an open net.

“His kicks were a little inconsistent, maybe the wind, he kicked a few to us,’’ Rogers said of Burpo. “I thought if we would have been expecting it we could attack the goal. But, usually, keepers don’t do that so I guess guys weren’t expecting that.

“I told everyone else a draw would have felt like a loss — they’ve struggled the past few games. I thought we played well, they kind of bunkered in so it made it tough on us.’’

The Revolution, who had 16 players on the roster available, next visit the New York Red Bulls in a US Open Cup game Wednesday.

“I thought the response was great,’’ Phelan said. “When you’re in a slump, we didn’t necessarily get over the hump but we came close and the next game is a lot more important. I think we’re starting to figure each other out and starting to work harder for each other, and, unfortunately, it didn’t go our way, but that’s a bright spot.

“People have adapted to the situation, they know it’s not going to be the same starting 11 every week. So, guys that are coming in are coming in with confidence. Regardless of the result we can hold our heads high.’’