THIS STORY HAS BEEN FORMATTED FOR EASY PRINTING
Revolution 3, Dynamo 0

Revolution as good as new 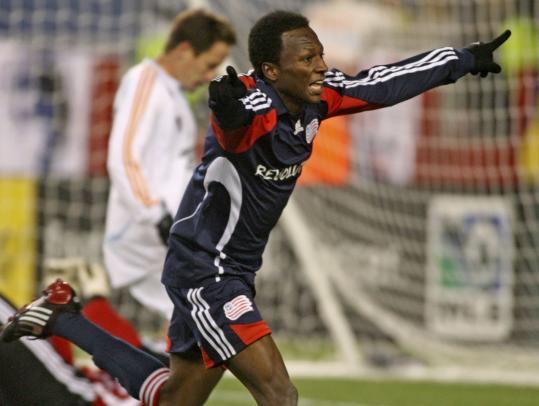 Sainey Nyassi didn't slow down after he used his speed to get into position to score his first MLS goal. (STEW MILNE/Associated Press)
Email|Print|Single Page| Text size – + By Frank Dell'Apa Globe Staff / March 30, 2008

FOXBOROUGH - The Revolution's new-look lineup hit the ground running last night. Teenagers Kenny Mansally and Sainey Nyassi, and fellow second-year pro Adam Cristman ignited a high-octane attack as the Revolution took 3-0 victory over Houston in a rematch of the last two MLS Cups, both won by the Dynamo.

Three players (Chris Albright, Mauricio Castro, and Kheli Dube) made their Revolution debuts and Mansally and Nyassi their first professional starts as the Revolution opened the Major League Soccer season at home for the first time, improving to 3-7-3 in season-openers.

Newcomers or new starters contributed to every goal. Steve Ralston scored in the 16th minute after a Nyassi-Mansally combination; Castro earned the free kick that resulted in Cristman's 32d-minute score; and Nyassi converted the final goal with a solo run and devastating finish in the third minute of added time. Castro and Nyassi were expected to start, since Khano Smith (national team duty) and Wells Thompson (left heel) were out, but Cristman was added to the lineup a few minutes before kickoff after Taylor Twellman aggravated a right knee strain in warm-ups.

"In the first half we were definitely the better team," Revolution coach Steve Nicol said. "In the second half, you saw the difference in fitness; obviously, they've played in the Champions [Cup], meaningful games. Saying that, you saw the competitiveness of our players, and the last goal [by Nyassi] was icing on the cake."

The Revolution's new starters made an immediate impact. Nyassi crossed to Castro, whose first touch as a Revolution player nearly resulted in a goal, his low, left-footer saved (third minute) by Pat Onstad. Mansally took the ball off Brian Mullan, carried into the goal area, and crossed (14th) just past a sliding Cristman. A minute later, Nyassi ran directly at the defense and fed Mansally, whose shot rebounded to Ralston for an easy finish at the back post.

In the last two MLS Cups, the Dynamo added a midfielder after halftime to match the Revolution's 3-5-2 alignment. This time, Houston switched formations midway through the first half, the change producing more possession for the Dynamo. But the Revolution scored again. Jay Heaps, starting at left back, started the sequence, moving into the attack and touching on to Castro, who was fouled by Dwayne De Rosario. Ralston quickly took the free kick, rolling a square ball for Jeff Larentowicz, who drove a dipping shot that was blocked by goalkeeper Onstad. Cristman, unmarked on the edge of the goal area, headed the rebound into the left side of the net for a 2-0 lead.

"We were not surprised, we knew what we were capable of doing," said Shalrie Joseph, who directed the Revolution midfield. "If we keep possession and attack, we can definitely dominate a game. Jeff [Larentowicz] and I try to get everyone involved. Sainey has some quickness we haven't seen in a while and we were able to stretch the defense. [Castro] gave us the possession we need on the left. Without Taylor, Khano, and Wells, guys stepped up."

The Houston defense was knocked off balance in the early going, victimized by the Revolution's speed and unpredictability. The Revolution's quickness and defensive pressure led to poor clearances and produced turnovers, including one by Eddie Robinson, which led to a Ralston feed for a high shot by Mansally in the 39th minute.

But the Dynamo made an aggressive run early in the second half, starting as Richard Mulrooney was cautioned (58th) by referee Michael Kennedy for a hard foul on Castro. A minute later, Houston had chances to score on a Stuart Holden header and a Robinson shot off a corner kick. Matt Reis made a diving save as Holden deflected a Mullan cross, then Nyassi cleared Robinson's shot off the line, Larentowicz heading away the rebound for another corner.

Nyassi went straight at the defense again during injury time a sent a shot under the bar past Onstad.