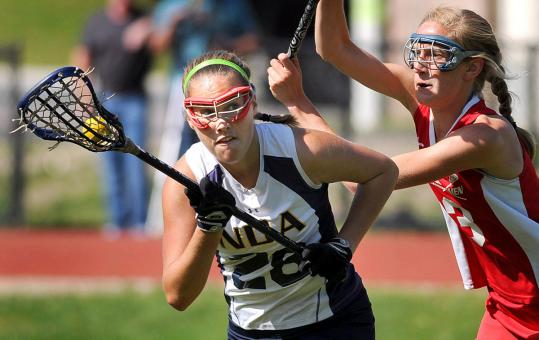 HINGHAM — Every night, the two coaches share a dinner table, discussing common opponents, practice plans, and even game strategy. This spring, their programs have been the most successful girls’ teams in the area. More often than not, though, the conversation is typical back-and-forth between mother and daughter.

Meredith Frank has made quite a debut in her in first season as the head coach at Notre Dame Academy in Hingham. Her experience on the sideline is limited: The 23-year-old former Westwood High standout spent last spring as a grad assistant at her alma mater, six-time national champion Northwestern, where she was a three-time All-American selection.

But Frank stepped in and guided the Cougars to a 17-1 mark during the regular season, earning the third seed in the Division 1 South sectional, followed by tourney wins over Hingham (16-10) and Mansfield (18-7) entering last night’s semifinal match against Needham.

She is following in the footsteps of her mother, Leslie, who has led Westwood High to four state championships and guided the 19-0-1 Wolverines to the top seed in the Division 1 South this season. Her prolific squad outscored their first two tourney foes, Norwood and Walpole, 40-6, entering last night’s semifinal game against Wellesley.

Two coaches with a combined 40 wins, living under the same roof.

“We’re each other’s eyes,’’ said Meredith Frank, who graduated from Northwestern in January with a master’s degree in athletic administration. “But there’s more talk about our teams and how we can make our teams better. If I have a drill that I think might work for her, or vice versa, she’ll give one to me. So we bounce ideas off each other. I don’t think it’s a huge rivalry between us. It’s more how can we make each other better.’’

A standout midfielder, Meredith Frank started all 85 games of her Northwestern career, helping the Wildcats to four consecutive NCAA Division 1 titles (2006-2009). But she always dreamed of coaching and mentoring high school players.

“I think it’s very easy to listen to what she tells you, because you know she has that experience,’’ said Notre Dame’s leading scorer, Jessica Roach, a senior captain from Scituate who will play for the University of Vermont next year. “She’s won so many championships in her life that it’s easy to want to impress her and do exactly what she wants you to do.’’

Notre Dame athletic director Donna Brickley said her coach is “very mature, diligent, takes a lot of initiative, and is resourceful. She obviously has the tremendous Division 1 college lacrosse experience,’’ she added, noting that Frank came highly recommended. “We’re really excited about her ability to have great rapport with her kids too on the college side of things.’’

Frank draws her coaching style from her mother, as well as Northwestern coach — and Hingham native — Kelly Amonte-Hiller.

“I think [Meredith] has more knowledge of the game than I do because of her experience playing for so long,’’ said Leslie Frank. “I’m not even close to her knowledge of x’s and o’s.’’

Frank added that her daughter is demanding of her players in conditioning drills, but she needs to manage her expectations of high school athletes better, especially after her coaching stint at Northwestern. In the past, mother and daughter have coached together with the Mass Elite club lacrosse program. On several occasions early this season, Westwood and Notre Dame held combined practices and scrimmaged against each other.

Notre Dame has had plenty of offense this season. The Cougars failed to reach double-digits in scoring only twice, one of which was an 8-7 loss to Norwell, the team’s only setback of the season.

The Cougars will only lose three seniors. Behind Roach (72 goals, 60 assists during the regular season), sophomore midfielder Alex Dalton of Needham has battled back from a bout with muscle compartment syndrome to emerge as the team’s second-leading scorer.

Eventually, Meredith Frank would like to become a high school athletic director. She wants to coach at Notre Dame as long as the school will keep her on board. She knows eventually she could face her mother, and her alma mater, in a game, possibly this year’s sectional final.

“If I ever face my mother, she’s a terrific coach with a very, very disciplined team,’’ said Frank. “I have the utmost respect for her. We’ll play [Westwood] hard if we ever got there. It will be very, very fun for me. Not so fun for my dad,’’ Stuart Frankl.

Nobles coach Meghan Cleary Hamilton felt that team chemistry, senior leadership, trust, and resiliency keyed the Bulldogs (15-1) to the ISL crown and pushed the team through adversity. Most of the players who were injured during the season were starters.

“We certainly had some obstacles to overcome,’’ said Cleary Hamilton, in her fifth year of coaching at the Dedham prep school. “But everyone really rallied around each other and supported each other in their recoveries. At the same time, younger players really stepped up and filled some crucial roles for us.’’

Senior captains Chelsea Landon (Norwell) and Reilly Foote (Newton) led the way for the Bulldogs, who ended their season with a 21-12 win over Milton Academy in the May 27 final regular-season game (there are no spring tournaments in the ISL). Landon, an All-American midfielder and an academic All-American, will take her skills to Duke next year. Foote will play at Yale.

“We had some exceptional senior leaders who set a really good tone and led a really good example for younger players to follow,’’ said Cleary Hamilton.

Michael Mancinelli can be reached at mmancinelli@globe.com.