THIS STORY HAS BEEN FORMATTED FOR EASY PRINTING
MC 7, Hingham 2 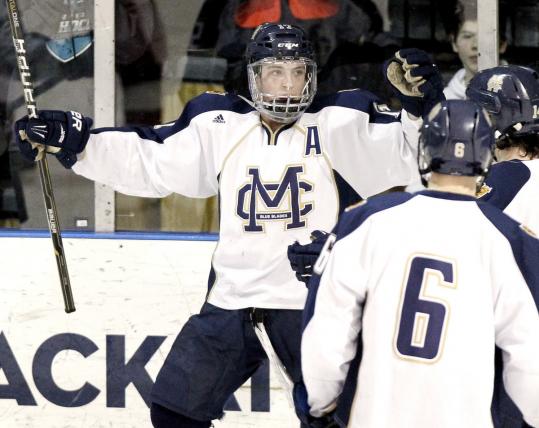 With open arms, Ryan Fitzgerald accepts congratulations from his Malden Catholic teammates after one of his three goals. (WINSLOW TOWNSON FOR THE GLOBE)
By Ryan Mooney Globe Correspondent / March 12, 2012
Text size – +

NORTH ANDOVER - Hingham entered its third Super 8 game at Merrimack’s Lawler Arena on Sunday in possession of its own destiny.

After BC High eliminated St. John’s of Shrewsbury earlier in the day, setting up a possible three-way tie among the Eagles, Hingham, and Malden Catholic, the Harbormen had the daunting task of taking down the only unbeaten team in Group 1 and doing it by at least three goals in order to win the goal-differential tiebreaker.

But Malden Catholic (18-1-4) had its own agenda and executed it flawlessly.

“I’m very happy that we got the 2 points, that’s what we came here for,’’ Malden Catholic coach John McLean said. “I wasn’t very happy defensively how we played . . . the first line did what they’re supposed to do. They have a lot of talent, they move the puck well, and when they get a chance, they’ll put it in the net.’’

Defensive miscues and open-net chances for Hingham had McLean on edge in the second period. Junior goaltender Connor Maloney finished with 12 saves.

“He stood on his head today,’’ defenseman Colin MacGillivray said. “There was a lot of chances and he stopped them.’’

“I thought Maloney did a great job,’’ McLean said. “We didn’t do a good job in our end, he came up with some huge saves. The kids felt really good after the second period and I kind of blasted them. [Hingham] probably missed three empty nets. It’s a different game if they put that puck in the net.’’

Animosity on the ice grew with each Malden Catholic tally. By the time Collier scored on a shorthanded breakaway to extend the Lancers’ lead to five at 3:29 of the third period, roughing minors and matching penalties were handed out frequently and without bias.

“Both teams want to win bad out here, so it’s going to get chippy,’’ Fitzgerald said. “So it was on both sides but we just pulled through.’’

“We talked to our guys, ‘You can’t get thrown out or you’re out of the tournament,’ ’’ McLean said. “But I thought the refs did a good job.’’

After a slow start with both sides struggling to get shots through traffic, Collier made a strong move to the net after taking a drop pass from Fitzgerald just inside the Harbormen zone and deked around netminder John Grenier to put the Lancers up, 1-0, at 7:51 on the first shot of the game.

Less than three minutes later, Patrick Mannion picked Lancers defenseman Casey Fitzgerald’s pocket at the Harbormen blue line, and turned MacGillivray inside out at the blue line to go in alone on Maloney before going top shelf for the equalizer.

As the odd-man rushes and breakaways continued, Malden Catholic freshman Ara Nazarian entered the Hingham zone on a partial breakaway with just over three minutes left in the opening frame. Grenier came out of his crease aggressively and Nazarian went forehand to backhand, sliding the puck into an open net with 22 seconds left in the period to put the Lancers on top for good. Nazarian has scored in every tournament game so far.

“A lot of guys will take that shot from the outside,’’ McLean said. “He’ll take it right to the net and sacrifice his body to make a great play. He’s a dynamic player.’’