THIS STORY HAS BEEN FORMATTED FOR EASY PRINTING
St. John's Prep 3, St. Mary's 1 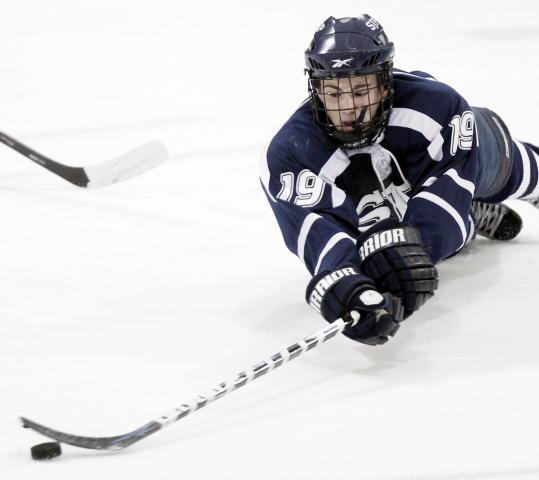 Sam Kurker scored twice, including the winner in the third period, as the Eagles (16-5-2) defeated St. Mary’s, 3-1, in the final game of Super 8 group play at Merrimack’s Lawler Arena Sunday night.

St. John’s eliminated the Spartans with the victory, dodging a three-way tie with them and Central Catholic, and the mathematical headache that would have come with the tiebreaker. Central Catholic, its fate resting on the outcome of this game, advanced to play Group 1 winner Malden Catholic on Wednesday.

The Eagles will play Group 1 runner-up BC High Wednesday.

Kurker got in on a partial breakaway after forcing a turnover just outside of the Spartans’ blue line, and put a top-shelf wrister past Bailey MacBurnie to snap a 1-1 tie at 11:40 of the third period. Kurker assisted on Brian Pinho’s insurance goal less than two minutes later.

“I had a lot of space and just tried to get it on net,’’ Kurker said. “It went in and I was pretty lucky.’’

The Spartans turned up the physical play in the final minutes, largely outmuscling the Eagles and holding a 12-10 shot advantage in the third. St. John’s David Letarte stopped all but one of the 25 shots he faced.

“When the game was on the line, our top guys stepped up,’’ Hanson said.

St. Mary’s struck first at 8:15 of the first off an offensive zone faceoff. Pinho was unable to win the puck cleanly and it bounced out to Spartans forward Frank Moreschi above the right circle. Letarte made the initial stop on Moreschi’s shot, but Cam O’Neill was on the doorstep to sweep in the rebound.

It took a power-play for St. John’s to find some offensive rhythm in the first period, but still had trouble getting pucks on MacBurnie (25 saves), missing the target with a handful of decent looks from the point.

Kurker pulled St. John’s even in the second period on a power play.

Andrew Brandano won the offensive zone faceoff to defenseman Nick Pandelena at the right point after Spartans forward Jarrod Fitzpatrick was sent off for charging. Pandelena put a rocket toward goal that rattled off the end boards and popped out to a waiting Kurker, who beat MacBurnie short side.

“We got one more game left [before the finals],’’ Kurker said. “We know [BC High] is going to bring it to us, and we’re really excited to play them.’’