THIS STORY HAS BEEN FORMATTED FOR EASY PRINTING
Boys hockey 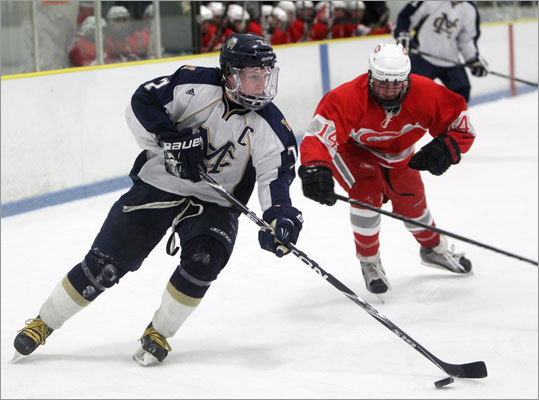 It has been more than a decade since a high school boys’ hockey team suited up in Charlestown, but despite the absence of the once-proud program, the puck-hungry Townies have a current crop of high school players in other places that have brought about a hockey revival to Monument Hill.

At the forefront of this renaissance are two best friends, Boston Latin’s Conal Lynch and Malden Catholic’s Brendan Collier, who have put up big numbers for their respective schools, making names for themselves, and their town in the process.

“He was my first friend,’’ said Collier, who grew up just one street away from Lynch and has been playing hockey with him since the age of four. “We hang out all the time. I just walk into his house like I live there.’’

Both were influenced by their parents and older siblings who got them into the sport at a very young age, ultimately pairing the two together to make a dangerous on-ice tandem that tortured youth teams at every level.

“We were on the same line since we started playing together,’’ said Lynch. “We just always know where the other one is on the ice at all times.’’

Added Collier, “I’d just throw it behind me because I knew where he was going to be at all times and he always put it in.’’

This dynamic made them into the players they are today; both senior captains who have scored more than 100 points in their careers and have helped to guide their respective programs to new heights.

“We always tried to see who is better and it has helped us in the long run,’’ said Lynch. “I wouldn’t be as good as I am now without being challenged by him.’’

Lynch tested into Boston Latin in the 6th grade and started playing on the varsity team as an 8th-grader. He helped turn a once-sagging program into a contender, making the state tournament and bettering the Wolfpack’s overall record in each of the last three years.

“He was always the smartest of all us all, so he went to Boston Latin,’’ said Collier, who has created a legacy of his own since joining Malden Catholic as a freshman starter.

As a junior, Collier would go on to score the winning goal in overtime of the Super 8 championship final last season and was recently ranked as the 131st best North American hockey player by the NHL’s Central Scouting Bureau.

But it wasn’t always hockey-happy times in Charlestown, as there was a noticeable void in the community when the high school program faded alongside a down time for the Boston Bruins, creating a lack of interest in the sport.

“We took some time off,’’ said Collier of the city. “There was a patch where the kids around here were struggling, but as a whole the kids are bringing hockey back.’’

And making sure that the game was played year round has helped bring the game back to the forefront, as the kids heat up “The Kitchen’’ at Eden Street Park for roller hockey once the weather takes a turn for the better

“It’s the way that everyone comes together around here,’’ said Lynch of the game’s resurgence. “There weren’t many kids who weren’t playing hockey. The kids are a lot more competitive out here, so they try to beat each other for bragging rights. You want to show everyone else that you’re that much better than them. There is always that desire to win.’’

That desire is engrained in these players and Robert Anthony, the head coach at East Boston High School, is all too familiar with it, as four of his 13 players hail from Charlestown.

“Charlestown has always had great hockey players,’’ said Anthony. “They put themselves out there and give 110 percent.’’

“The background they grow up in is a tougher environment,’’ said Anthony. “Which makes them tougher players and they express that on the ice.’’

Another place familiar with the Townie player prototype is the co-op of St. Clement and Pope John (which will dissolve into two separate programs at the end of this season).

“Team-wise they are as tight and close a bunch as I’ve ever seen,’’ said St. Clement/Pope John coach Steven Peck, who has eight Charlestown players on his roster. “Every one of them has the others’ back and are quick to step up to help each other out.’’

“They are all very good and very hard workers,’’ said Peck. “They are very confident in themselves and their abilities.’’

Although Lynch is the only Townie at Boston Latin, Collier is joined by some of his town mates, with senior Pauly Myers and sophomores Pat Wrenn (Sean’s brother) and Nolan Carrier putting in solid contributions for the top-ranked Lancers.

This current group is responsible for helping to revitalize a game that fits this town’s persona to perfection.

They are also aware of the support from their community, and the responsibility that comes with it to be as great as they can be.

“I do feel that the younger kids look up to us,’’ said Collier. “The numbers in the youth system were low, but now they’re looking up. We have two teams at each level of youth and seven or eight kids from Charlestown are set to go to MC next year, because they look up to us.’’

There is no doubting the skill coming out of Charlestown at this time and the landscape of many teams is being molded by a great group of talented youngsters that have many in their community imaging how things might be otherwise.

“It’s crazy to think of what kind of team we could be put together with the players from here who are playing right now,’’ said Lynch.

But it’s not crazy to think that ‘Townie Pride’ has returned to the rinks in full force.

Barnstable at Bridgewater-Raynham, Tue., 7 p.m. - This is the second half of a home-and-home of which Barnstable won the first Saturday night, 5-2, to move ahead of B-R by four points in the Old Colony League. This will be B-R’s last shot at making a run at a league title and with an outside chance at the postseason.

Boston Latin at Lincoln-Sudbury, Wed., 4 p.m. - It’s a three-team race in the MVC/DCL Division 2 and the top two teams take to the ice in this one, with L-S holding a one point advantage over the Wolfpack.

Lowell Catholic at St. Bernards, Wed., 5:40 p.m. – This one will ultimately decide the Catholic Central II champion, with both teams currently tied atop of the league standings. Lowell Catholic won the previous meeting, 3-2, back Jan. 18.

No. 6 BC High at No. 12 Reading, Thur., 7:45 p.m. – Reading has quietly placed itself near the Super 8 bubble and in order for the Rockets to land squarely on it with a week to play, they must add a huge win to their resume. This is their chance.