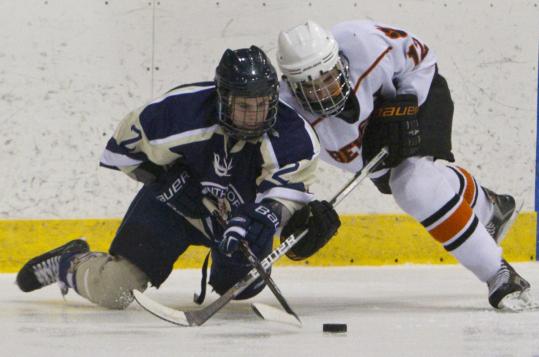 The recognizable face working behind the Winthrop High bench is simply known to the players as ‘Coach Mike.’ He’s just one of the assistant coaches, along with Adam Warsofsky, Mike Norris, and James Feeley, under fifth-year head coach Dale Dunbar, a rather notable hockey alum from Boston University himself.

Dunbar and Mike Eruzione, Winthrop native and 1980 Olympic hero, may carry name recognition. But on the ice, the Viking players are once again making a name for themselves. Winthrop is technically sound. The passes are crisp, the skating quick, the puck well-protected, and the shots strong and accurate.

At the defensive end, opponents rarely enter the middle of the zone. Foes are steered to the boards, where the Vikings usually knock out the puck quickly.

“They’re just so well-coached, so well-disciplined, so well-prepared,’’ Beverly coach Bob Gilligan said after Winthrop dealt his squad a 5-1 loss Saturday night. “That’s what separates them. Here’s two guys’’ — Dunbar and Eruzione— “who are donating their time back to the community. How do you do better than that?’’

Dunbar maintains a close relationship with BU coach Jack Parker, who is known to run difficult practices and set high expectations. Eruzione played for Parker and 1980 Olympic coach Herb Brooks, another noted taskmasker. “Our practices are pretty high-tempo, but it’s good for us,’’ said Winthrop senior captain Jake Rand, an anchor on defense along with Mike Paulson. “That’s really where it all starts, in practice. It gets us conditioned and ready for the next game.’’

The Vikings, however, did not have the look of a conference champion earlier this season. Winthrop tied Wilmington in the season opener and then dropped games to Peabody and Danvers. The season turned with a 3-2 win over perennial Super 8 contender Springfield Cathedral Jan. 8.

“I think we looked at the team on paper, but the game is not played on paper,’’ said Dunbar after the Vikings (13-2-4 overall, 10-2-3 Northeastern) clinched the conference title with a 7-1 win over Revere on Sunday night. “We got ahead of ourselves early on. It was the game against Springfield Cathedral that really turned the season around. To travel to that rink and win was huge for us. That’s where we really came together.’’

It started on defense. In the eight games prior to the Cathedral game, the Vikings allowed 16 goals. In the 10 games since: eight. Winthrop is the second-most stingy team in Eastern Massachusetts. Goalie Steven Waites, a 5-9, 160-pound junior, carries a 1.31 goals against average, but rarely faces more than 20 shots per game.

“I’m a real stickler for that stuff,’’ Dunbar said of the low goals-against total. “Our practices are often harder than our games. No mistakes are left unturned because we are here to win championships, and it takes strong defense to do that.’’

It’s hard to tell just how good Winthrop’s defense is because the Vikings do not spend much time in their own zone. That’s due to a strong backcheck that keeps the puck on the edges of the zone and often neutralizes an opponent’s offense.

“They don’t give you anything in the slot area where most of the goals are scored,’’ Gilligan said. “Everything’s kept to the outside, and if you penetrate that, you’re going to pay the price.’’

The Vikings feature one of the best top lines in the conference: senior forwards Joe Scarfo (40 points) and Nick Clewer (24 points) man the wings while 6-3, 175-pound junior Chris LeBlanc (40 points) centers the line.

Last weekend against Beverly and Revere, Scarfo and LeBlanc each recorded hat tricks, and both finished the weekend with eight points. On Monday, Scarfo and LeBlanc were both named to the NEC All-Star team. “Chris LeBlanc is a special player,’’ Dunbar said. “I believe he can be a D1 college hockey player in three or four years here. Joe Scarfo is another highly skilled player who could also go on to play D1 hockey. But Nick Clewer has over-achieved at every level he’s played at, and LeBlanc and Scarfo are fortunate to play with him. He’s really made those two become the players they are today by doing the dirty work in front of the net and down low for them. You need a guy like that to have a successful line.’’

With the Leblanc line leading the attack and a stellar defense, the Vikings will certainly be in the hunt in the Division 2 tournament. Winthrop advanced to the Division 2 North semis last year before falling to Peabody.

Five to watch With the MIAA boys’ and girls’ tournament pairings set to be released Saturday, here are five compelling teams to keep an eye on in the playoffs:

■Billerica: The Indians (10-1-7) entered the Woburn Irish American Tournament this week riding a nine-game winning streak. They beat and then tied Central Catholic this season, which bodes well for the tourney.

■Austin Prep: The Cougars have had an up-and-down season, but they won five straight heading into the Cape Cod Classic. February wins over Arlington Catholic, Central Catholic, and Winchester show they may be getting something going.

■Woburn: The Tanners topped Reading two weeks ago in dominant fashion to prove their strength in the Middlesex League, but a 6-0 loss to St. John’s Prep on Valentine’s Day exposed their vulnerability against the prep schools that traditionally rule the Super 8.

St. Mary’s: The Spartans were cruising until they faced Malden Catholic, Cathedral, and Weymouth in a six-day span. St. Mary’s lost all three games, two of them narrowly. Donald Hesse has played well in goal.

St. John’s Prep: The Eagles seem to be flying high, but they have mixed results against some of the state’s top teams. St. John’s lost to Malden Catholic twice and struggled against Cathedral, but posted dominating wins over Woburn, BC High, and Xaverian.

Odds and ends Swampscott senior goaltender Patrick Gavin made the most saves of any North Shore netminder this season as he stopped 58 shots in a 7-0 loss to Marblehead Saturday. . . . The St. Mary’s girls extended their unbeaten streak to 98 games with a 4-1 win over Acton-Boxborough Monday. . . . The Woburn girls continued their strong season by clinching the Middlesex League title with a victory over Stoneham combined with a Lexington tie against Belmont last Wednesday.

Arielle Aronson can be reached at aaronson@globe.com.