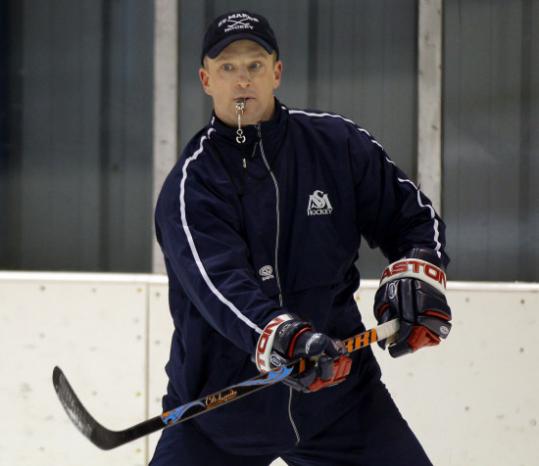 SOUTHBOROUGH — At 2:55 p.m. last Friday, 35 minutes before the start of boys’ hockey practice at St. Mark’s School, there was already a swarm of fully dressed players raring to go. A few middle-aged men in the lobby at the private school’s campus rink were talking hockey, and a slew of spectators were against the glass, watching the warmups.

A few players were lined up at center ice, taking turns at breakaway attempts and testing new moves. A crafty deke and a sly shot through the goalie’s legs left one player showcasing a fresh celebration: a slide on one knee as he scooped up some ice and threw a fist pump in the air.

There was laughing. There was smiling. And through it all, there was one detail that was noticeably evident. Of all the places high school boys could be on a Friday afternoon, this particular bunch clearly didn’t want to be anywhere else.

And that’s exactly what Scott Young has tried to stress more than anything in his first season as head coach at St. Mark’s, which competes in the Independent School League. A 1985 alum of the school, Young starred at Boston University and went on to play 17 seasons in the National Hockey League. He won a pair of Stanley Cups — in Pittsburgh and Colorado — and represented the United States in three Olympic Games before returning to his home in Sterling (he grew up next door in Clinton), a half-hour ride from the St. Mark’s campus.

“My philosophy is I’m going to push you hard, I’m going to push you very hard in practice to do things well, but you’re going to enjoy coming to the rink,’’ said the 43-year-old Young, sitting on a bench before practice. Other than leading a travel team in Concord, this is his first coaching position at any level.

“Being in the NHL for so long, there were times when it wasn’t that much fun,’’ he said. “There’s a fine line of pushing them to become better players, and also making sure that they’re really dying to play for you.’’

Young always had a feeling that if a varsity coaching position opened up at his alma mater, he would be interested. When last year’s coach, Shawn Reid, decided to move back to his native Minnesota, St. Mark’s athletic director Tracy Jones sent Young an e-mail asking if he knew anyone who might be interested in the job.

Waltham native Shawn McEachern, another former BU standout who skated with Young on the US Olympic team in 1992, had just accepted the head coaching job at another ISL program, the Rivers School in Weston. The day before Young was scheduled to interview at St. Mark’s, McEachern called his old friend to ask whether he knew of any players he should try to recruit.

Young replied, “Well I’m going for the St. Mark’s job tomorrow, so I’m not giving you any players.’’

“We said, how crazy would that be to bring in a former NHL guy,’’ said Leddy. “The next thing you know, we were looking at the interview schedule and he’s on the list. Right away, right after we were done we were like, ‘This is the guy we want. He clearly knows his stuff.’ ’’

Young impressed the school’s administrators too, and was hired.

Less than two weeks earlier, Tony Amonte, who teamed up with both McEachern and Young on a number of national teams, had returned to his alma mater, Thayer Academy in Braintree, as head coach. All three, still good friends, insist the timing was a mere coincidence.

St. Mark’s and Rivers will square off Saturday afternoon in Weston.

The banners hanging in Gardner Rink at St. Mark’s are starting to look musty. Their big white letters are fading into a mild yellow; the font looks outdated.

St. Mark’s hasn’t won the ISL’s Eberhart Division title in eight years. The Lions finished 8-20 last season, had just two wins a year before that, and three seasons ago, they did not win a game.

Young is hoping to turn all that around.

His players know that any little mistake won’t go unnoticed. Young preaches the same things that his coaches did: The smallest aspects are where a game is won or lost, where players can turn into stars or fall into the sea of millions trying to make it even half as far as Young did.

“It’s the small details where good players turn into great players,’’ added Heise. “A lot of coaches have to yell to get their players’ respect. For him, he just says it, and you know what he’s achieved already, so you just listen.’’

Fifteen miles east in Weston, the Rivers School program is in a similar position. A few players admit that other teams have gotten used to the idea of coming into MacDowell Arena so confident of a victory that the players would actually have to try to lose.

“A lot of people come in just thinking they’re running us over,’’ said Connor Dempsey, a senior captain at Rivers. “You can see them come out slow on the ice, just going through the motions.’’

Dempsey and the Red Wings won’t be pushed around anymore.

And with the 41-year-old McEachern on the bench, joining Young and Amonte at their respective schools, there’s a new energy flowing through the league.

“I definitely think so, especially with us,’’ junior captain George Crowley said after Rivers beat Amonte and his Thayer squad, 4-2, last week, to improve its record to 5-7. “I mean, last year at this point we hadn’t won a game yet and that was our fifth win . . . The kids are going into games expecting to win now. It’s a culture change, I guess.’’

Rivers athletic director Jim McNally said that he has been impressed by the team’s improvement, and its work ethic.

“I was excited to come to Rivers and work with the kids,’’ said McEachern, who previously had worked as an assistant coach at Northeastern and University of Massachusetts Lowell. He also is an assistant athletic director at the school.

“I think we’re trying to build a team that works hard and works together,’’ he said. Citing his coach at BU, he added, “Playing for Jack Parker all the years, you try to take what you can from the guys you work with.’’

Players at both schools admit they’ve been bugging their coaches for NHL stories whenever they get a chance. And there are other perks that go along with having a celebrity coach.

At the ISL’s annual Holiday Classic Tournament held over New Year’s weekend at Buckingham Browne & Nichols School in Cambridge, a morning win left St. Mark’s with a lot of time to kill before the team’s next game.

Young called up Parker, and his old coach at BU gave the Lions a private tour of the school’s famed Agganis Arena.

Parker told the players to appreciate every moment on the ice, just as he had told McEachern and Young when they played under him, and exactly what the two new coaches have been trying to teach as well.