Lowell heart transplant patient is profile in courage, on and off gridiron 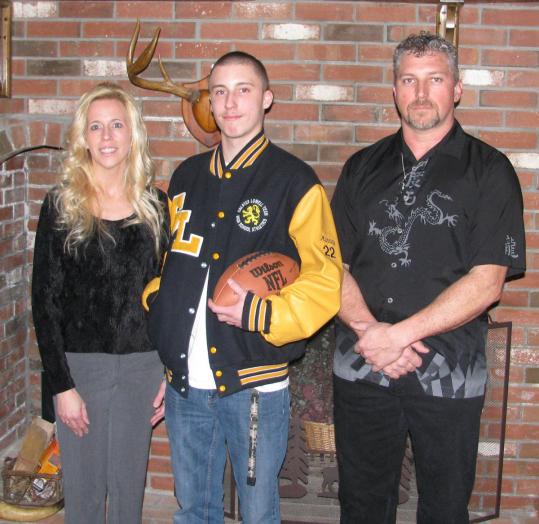 Anthony Manning III, who had a heart transplant at age 8, with his parents, Debbie and Anthony Manning Jr.
By Thomas Burke Globe Correspondent / March 1, 2012
Text size – +

When Debbie Manning learned that her son Anthony was planning to try out for the freshman football team at Greater Lowell Technical High School, she cried.

“I thought there was no way they were going to allow him to play,’’ she recalled.

But her slim, quiet son was determined. He was to going play football.

Four years later, his playing days are over, but not before earning the admiration and respect of his teammates and coaches for his perseverance and overcoming adversity.

On Sunday night, the 19-year-old Manning will receive the Henry Smith Courage Award at the Gridiron Club of Greater Boston’s Super 26 High School Awards dinner at Lantana’s in Randolph.

A few weeks after his 8th birthday, Manning underwent a heart transplant at Children’s Hospital. He had been at the hospital for treatment for restrictive cardiomyopathy and went into cardiac arrest. The doctors placed him on a machine that functioned as a replacement for his critically ill heart, and within a day, a donor heart became available.

His recovery was rocky, and Manning frequently found a lack of understanding and acceptance from classmates in elementary and middle school. The family moved from Westford to Tyngsborough, and it viewed his enrollment at Greater Lowell as a fresh start.

He shocked both his parents, however, when he came home the first day of school and declared his intention to play football. He had played lacrosse in elementary school, and then took up karate, so he was in good physical shape. But football?

“I had thought about football, but I wasn’t sure about it until that first day. I was sitting in the gym with some of my friends, hearing sports sign-ups,’’ said Manning. “Some people had been telling me I couldn’t do it, that I wouldn’t be able to take a hit. I wanted to show them that I could, and to prove them wrong.’’

As a child, Manning had not been nearly as interested in the game as his younger brother, Devon, who had undergone two open-heart surgeries and three cardiac catheterizations as a baby. Devon was a football fan by age 5, and he now plays quarterback for the Greater Lowell junior varsity squad.

Anthony acknowledged that he understood the risks of football and insisted he be allowed to play. No heart transplant patient from Children’s had ever been allowed to do so, but Dr. Leslie Smoot, his cardiologist, gave her blessing.

“We knew how important it was to him, and we decided that the potential benefits outweighed the risks,’’ said Smoot. “We all have to make decisions about risks, and everybody - Anthony, the family, and the school - knew what he was doing.’’

“The school nurse told me that I would be jeopardizing his life if I let him play. I told her that I felt I’d jeopardize him if I didn’t let him,’’ said Debbie Manning.

“He insisted he wouldn’t live in a box, and I couldn’t deny him the opportunity to live the life that he’d been given.’’

Anthony Manning was one of 72 freshmen on hand for the first day of practice. His mother attended that practice, and every other session the past four years.

Freshman coach Arthur Cornellier arranged for heightened emergency responses by local police and fire departments, but no medical emergencies ever arose for Manning.

The 5-foot-7, 120-pound Manning made the team as a defensive back. Though he played only sparingly in four years, he never missed a practice or a game. Running was a challenge; he got winded easily and his legs would ache because his heart could not increase its rate and pump additional oxygen. He wore extra chest padding, and did not play on offense to avoid taking direct hits.

Dan Murphy, who coached the varsity defensive backs when Manning was a sophomore and junior, said his commitment was outstanding.

“He’d do every drill, no matter how hot it was or how challenging it was,’’ said Murphy. “You’d not know he’d had any type of handicap. He didn’t play that much, but it didn’t seem to matter to him. He stayed on the team, and he encouraged everyone else.

“I remember one time he came in on a tackle, and the whole team erupted on the sidelines. It was like the movie ‘Rudy.’ ’’

Manning said that after a while, “the coaches lightened up and started to let me play more in the games. It felt good to be out there. My body felt good. I’d proved to myself that I could handle it. And being out on the field with my teammates, in the games and on the practice field - they were the happiest days of my life.’’

A year after his transplant surgery, the Mannings held a party in their son’s honor, and several guests gave him money. Rather than keep it, Anthony donated it to Children’s in memory of the donor of his new heart, a child whose name he never knew. The party, and the gift to Children’s, has become a Manning family tradition.

Kevin Callagy, who coached the Greater Lowell varsity this past season, found few opportunities to get Manning into the lineup.

He offered playing time at the junior varsity level, but Manning declined, preferring to remain with his classmates.

“I admired the courage that he showed, just being out there every day. And the message that sent to the other players - how important it is to be part of the team rather than worrying, ‘Is the spotlight on me?’ ’’

“I think they all learned from Anthony how precious life is, and how fortunate they are, to be able to do the things they do without restrictions. His greatest contribution was that he was a great teammate and great lesson to the other kids.’’