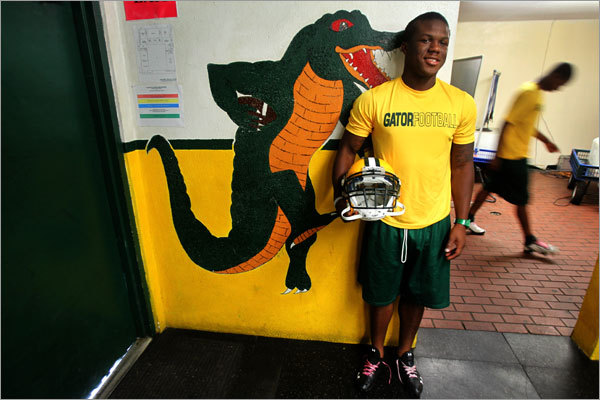 BELLE GLADE, Fla. — It was a time warp of sorts. A “Back to the Future’’ moment.

Patriots running back Fred Taylor returned to his Everglades roots last month to see his high school jersey number, 21, retired at a halftime ceremony. But before he arrived at Glades Central High School, where he once averaged more than a first down per carry, he stopped at Glades Day School to watch his son, Kelvin Taylor, play football.

With his famous father in attendance, the sophomore tailback romped for 265 yards, including four first-half touchdowns, a 93-yard run from scrimmage, and an 80-yard kick return. He, too, wore No. 21.

“Oh, there’s no doubt about that,’’ said Glades Day School coach Pete Walker. “I think it’s eerily similar. Just watching him run the football, the way he cuts, it looks like his daddy on a Sunday.’’

Taylor, who has been sidelined since Week 3 with a toe injury, played it cool while watching his son run hot.

“I never try to brag about him,’’ said Taylor, who is 15th on the NFL’s all-time rushing-yardage list. “I never show how proud I am of him to people in public because I don’t want people to think I’m throwing it in their face.

“I don’t want to flaunt that I’ve got a son that’s a very, very good high school athlete. I’m not a flashy guy. I know that with all the injuries I’ve had in my career, it could be gone in one hit. So I stay humble and modest and pray to God that he looks after him.’’

But in his mind, he is doing the Ickey Shuffle.

“He’s got some moves, some jump cuts that are dangerous,’’ said Taylor. “I was just saying to myself, ‘Wow, that was really amazing!’ When he carried the ball, he was making the right moves, making the right reads. I was like, ‘Wow, he’s much better all across the board than me.’

“He knows the game much more than I did at that point.’’

Kelvin Taylor, a soft-spoken, 5-foot-11-inch, 215-pound spark plug, is a child prodigy. He was an All-State selection as an eighth grader and the following year was selected National Freshman of the Year.

Sitting in the shade of the bleach ers on a hot day before practice, Taylor recalls how his father congratulated him on the sideline that Friday night under the lights.

Fred Taylor was clocked in high school at 4.28 seconds in the 40-yard dash, faster than Kelvin’s 4.5.

“That’s something I’m working on,’’ says Taylor, who just turned 17. “I want to get quicker.

“I want to be an NFL player. I don’t know if I’m going to guarantee it, but if I keep going the way I should, I’ve got a very high chance that God will bless me to go to the NFL. I don’t care which team.’’

His father says he isn’t pushing him to play in the NFL. He says he’s only pushing education. He tells his son to work hard and be humble, and he is, except when he’s with his father.

Walker must have thought he hit the lottery when Kelvin Taylor showed up in his office. The eighth grader wanted to play varsity football, which is allowable under Florida rules because the middle school is physically part of the high school.

“As soon as we saw him, we were elated because we knew he was going to be a special football player,’’ said Walker. “He’s already well developed physically.’’

The young Taylor was fearless on the football field, even as an eighth grader.

“I wasn’t scared,’’ he said. “I always wanted to play with better competition and bigger kids and that’s why I came here.’’

Last year, he led the Gators to a 1B state championship, saving his best for the playoffs. In four playoff games, he rushed for 1,158 yards and 19 touchdowns on 146 carries. He scored the winning TD of the championship game in overtime.

“We ran the ball off tackle, and he carried two guys into the end zone with him,’’ said Walker.

With 103 touchdowns in his first three years, he has a chance to break the Florida mark of 109 as a sophomore this year in the playoffs. But he never talks about records.

His teammates are in awe of him.

“He’s a fighter,’’ said cornerback Josh Thornton. “He’s a warrior, like in the movies.’’

Tough place to grow up Kelvin Taylor’s life has not been easy. His mother was a Glades Central cheerleader who got pregnant in high school, and his parents never married. Fred Taylor makes no excuses.

“Quite frankly, I was young,’’ he said. “He’s a gift from God, and I always knew that it’s up to me to make sure he grows up to be an outstanding man, and that’s what I’m going to do. We’ve grown so much stronger, regardless of the game of football.’’

Fred went to the University of Florida, where he helped the Gators win a national championship in 1996. He spent the first 11 years of his NFL career with Jacksonville.

Meanwhile, Tiffany Campbell-McGrew married and moved to West Palm Beach when Kelvin was 6. It was Tiffany’s brother, former Glades Central quarterback Jerry Campbell, who got Kelvin signed up for youth football.

Fred Taylor describes Campbell as a “good quarterback’’ who led Glades Central to a 1998 state championship with a furious three-touchdown comeback in the fourth quarter. But Campbell is currently incarcerated, serving 20 years at a Florida Correctional Facility for armed robbery. His sister swears he’s innocent, a victim of hanging out with the wrong crowd.

“It’s a touchy subject,’’ said Fred. “There are a lot of distractions out there. The girls. The people out there that become your bandwagon friends. And then the people that want to ruin your reputation, if you let it happen.’’

Residents of Belle Glade have to have tough skins, like the alligators that live in the canals that run between the fields of sugar cane.

Although it is part of Palm Beach County, it is a poor and violent town. When Fred Taylor was a child, it was known as the AIDS capital of North America because of skyrocketing infection rates. But it is also a hotbed of athletic talent; 48 players from the area have gone into pro football.

The local legend is that the running backs here get quick by catching jackrabbits in the cane fields and selling them. Kelvin Taylor laughs at that.

Fred Taylor laughs at it, too.

“I never ever, ever in my life chased a rabbit,’’ he said. “Fortunately for me, my grandmother busted her ass trying to put food on the table and keep us clothed, and she sent us to school so that we could be the best that we could be.’’

College possibilities Kelvin Taylor currently lives in West Palm Beach with his mother and stepfather. He gets up at 6:30 a.m. and commutes the 40 minutes to the private high school by car. He says he stays in top shape by running the canals — while keeping an eye out for alligators.

“I see ’em all the time,’’ he said, “but I don’t mess with them. I eat alligators. Alligator tail is pretty good, especially when they fry ’em. Tastes just like chicken.’’

He already is on the radar screens of many colleges, and he says Oregon, Miami, Florida, and Alabama are his top choices.

But that’s not his top priority.

“It’s God first, my family, and then football and school,’’ he said.

He acknowledges that being the son of an NFL star is sometimes difficult.

“I hate going places where people know me because of my Dad,’’ he said. “I like just being a regular kid, just hanging out and having a good time. I want to work for everything I get. Except girls.’’

Football here is a religion. In the locker room, a news story is read about a player who severed his finger and stayed in the game. Einstein is quoted, a Bible passage is read, and a ram’s horn is blown.

Friday night’s game is away, at West Palm Beach, against the powerhouse King’s Academy Lions (7-1). The Gators are 6-3.

During pregame introductions, a cheerleader empties a fire extinguisher to create a fog for the Gators to run through. But the Gators play as if the fire is already out. The secondary is picked apart by Lions quarterback Shane Bussey, who throws five TD passes.

Kelvin, smothered in the backfield, nets just 78 yards on 29 attempts and is held to just one touchdown in a 42-21 loss.

“My blockers decided not to block,’’ he is overheard muttering on the sideline in the fourth quarter.

But in a postgame interview, he refused to criticize his teammates.

“If the game is not going how you planned on it going,’’ his Dad has told him, “it’s OK. Try harder next time.’’

POSTSCRIPT: On Friday night, Taylor ran for 437 yards and scored all five Gator touchdowns in a come-from-behind 35-29 victory against powerhouse Jupiter Christian in the regional finals. With his team facing elimination with just 1:36 left to play, Taylor raced 76 yards for the game-winning TD.