THIS STORY HAS BEEN FORMATTED FOR EASY PRINTING
High School Baseball 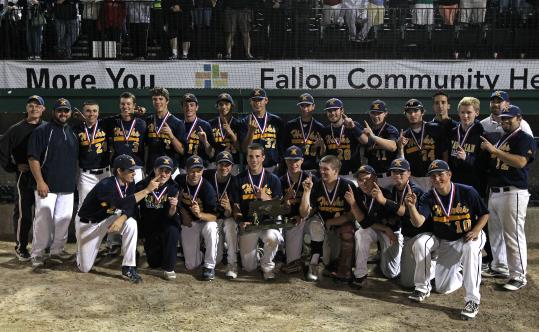 WORCESTER — Gerry Lambertleaned coolly against the railing of the protective fence in front of the dugout, flashing a smile as he chatted with his players.

After the pressure and suspense his Xaverian Brothers club had faced in the past month, there was no reason for the coach to fret the final three outs of the Division 1 state championship game.

Twenty-one pitches later, Tyler Campocorralled a weak ground ball to short and fired a laser to Mike LaVita to lock up a 7-1 victory over Algonquin Regional Saturday night at Holy Cross’s Hanover Insurance Park, the program’s first state crown since 2004, and third overall.

While his players jubilantly let loose, piling up in a celebratory pile to the right of the mound, Lambert turned toward the backstop, pumped his fist before turning to embrace his assistant, Anthony Falco.

“In the end, we kept our poise, we kept our composure, and when we were finally able to build some momentum, we were in really good shape,” said Lambert, whose Hawks closed the season on a 13-1 run.

Just six weeks earlier, few people, including some on the Hawks’ bench, could have foreseen Xaverian lifting a Massachusetts Interscholastic Athletic Association plaque.

The lowest point of their season could have easily derailed the title run.

On May 2, under an increasingly gray sky that hinted rain was on its way, the Hawks slowly made their way to the bench after a 7-4 home loss to Catholic Conference rival Malden Catholic, sealed emphatically by a monstrous home run to left by Manny Powers in the seventh.

At 5-7 overall, their tourney hopes were quickly dwindling.

“I can remember telling them that we continued to be playing reasonably well, but not well enough to win,” said Lambert. “I told them that we have to just keep focusing on being better. I can also vaguely recall telling them we were beginning to run out of time in terms of the urgency.

“And I remember apologizing to the team for leaving Alex Person out [on the mound] too long, because I left him out there too long in that game and he gave up a home run in the seventh inning, and that was on me.”

On Saturday night, Person was again still on the hill in the seventh inning, pitch count at 130 and counting for the Foxborough resident. Was he out there too long? Maybe.

His 133d, and final, toss was grounded to short for the game’s final out to cap a remarkable turnaround for the program.

“Very few teams in Massachusetts win their last game of the year,” said Lambert. “For us to be fortunate enough to [win the title] this year is a testament to these guys. They stayed with it, they battled through, and they deserve all the credit.”

The road had been anything but easy.

Five days after the MC loss, Norwood’s Tim Duggan delivered a three-hit, 11-strikeout performance in a 6-0 victory over host Brockton.

“Everyone on this team, seniors especially, knew something had to be done,” said sparkplug second baseman Chris Hoyt, a senior cocaptain from Walpole.

“The turning point was the game against Brockton [following the MC game]. We all kind of came together and said we needed to step up and we needed a tournament atmosphere from here on out.”

They followed it up that weekend with a 5-4 win over Bishop Hendricken before running the gauntlet against powerhouses BC High, Peabody, and St. John’s Prep.

The Hawks, 12-8 during the regular season, stopped second-seeded Walpole in the first round of the Division 1 South tourney and then dispatched of Silver Lake, Norwood, and Taunton.

With the Hawks trailing Lowell, 2-1, in the sixth inning of the EMass. final, Hoyt (3 for 5, 3 stolen bases) came to the plate with the bases loaded and drove a grounder past the outstretched glove of shortstop Chad Gens to put the Hawks up for good.

“Those plays, when the game is hanging in the balance, when you are able to have guys to execute, put good swings on it,” it makes all the difference, said Lambert.

In the fifth inning of the state final, Hoyt cracked a two-run double off the left field wall, just inches shy of a home run, for a 2-1 lead. He added a two-run single in the sixth.

In the fifth inning of the state final, Hoyt cracked a two-run double off the left field wall, just inches shy of a home run, for a 2-1 lead.

He added a two-run single in the sixth.

“For him to come up again with two on, two out, I said this the other day, that’s the guy I want up there, and he did it again.”

The victory was especially bittersweet for the Stonehill-bound Hoyt, Duggan (who will attend Fairfield), and Campo, who were able to avenge their 2010 state final loss at the hands of hurler Kevin Ziomek (Vanderbilt) and Amherst-Pelham.

“Tim and I said we were going to be back here after running into [Ziomek],” said Hoyt. “We weren’t sure if it was going to be last year or this year, but it happened to be this year, and we did great.

The defending Division 2 state champion Plymouth North baseball team was denied in its quest for a repeat, blanked 5-0 by South Hadley Saturday at Holy Cross.

Signature moment in the tournament: Leading 4-3 in the bottom of the seventh against the top seed in the Division 2 South tourney, Dighton-Rehoboth, the Eagles used a little trickery to swing the game in their favor. With D-R threatening to tie the game with a man on second, Plymouth North's infield yelled ‘bunt’ and charged toward home. The call baited the baserunner at second, who took a few steps toward third, anticipating the bunt. Pitcher Jake Stearnsthrew to shortstop David Murphy, who had run behind the second-base bag and made the tag for the out.

State final:Jordon Page was dominant on the mound for South Hadley, which entered the tourney with a 7-13 mark after facing a regular season schedule stacked with Division 1 opponents. His off-speed stuff baffled North (16-8) all afternoon, and he had plenty of help from his defense.

The Abington High girls’ softball squad was not shut out all spring in its 22-2 march to the Division 3 state final against Central Mass. champ Grafton. But the Green Wave was unable to solve ace Kendall Roy in a 1-0 defeat Saturday at Worcester State College.

Signature moment in the tournament: After earning the school's first South sectional title, the Green Wave picked up an emphatic 5-4 win over a Dracut team that had only lost one game all year.

State final: With a runner on second in the fifth inning, Grafton's No. 9 hitter, Amanda Voellings, lined a ball off Kelly Norton into right field. After a slight bobble in the outfield, the batter reached first safely, allowing Kate Cardoza to score the go-ahead run in the bottom of the fifth inning. Roy retired 13 of the final 14 Abington hitters.

Andrew MacDougall can be reached at andrew.macdougall@globe.com.