THIS STORY HAS BEEN FORMATTED FOR EASY PRINTING
Div. 2 state baseball final 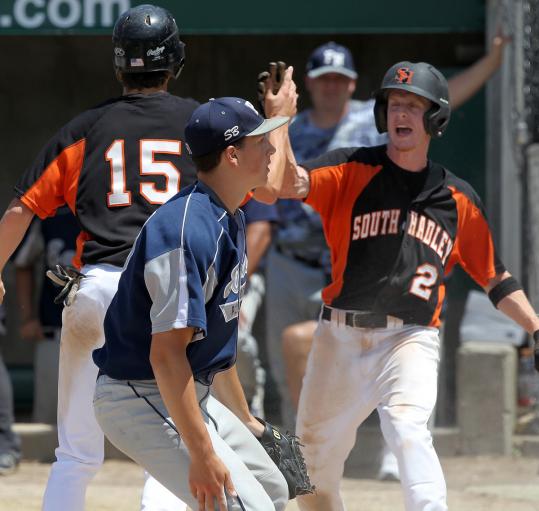 WORCESTER - South Hadley coach Matt Foley was confident in the ability of his team, despite entering the tournament with a 7-13 record. The Tigers played 16 regular season games against Division 1 opponents and he knew that experience could pay off. Turned out he was right as South Hadley finished a thrilling tournament run Saturday with a 5-0 victory over Plymouth North to win the Division 2 state title by dethroning the defending champions at Fitton Field.

“To have these kids have the mentality to have seven wins [going into] the playoffs and to have the confidence to win this thing is commendable to them,’’ said Foley.

Jordan Page was the star for the Tigers. After throwing eight innings in the quarterfinals against Southwick and seven in the Western Mass., final against Monument Mountain, the senior righthander pitched a complete game in the State Final.

The defense played well, highlighted by a diving catch over his head by center fielder Eric Pouliot to end the fifth inning.

“That play by Pouliot in center field was world class. When he catches that, I think we turned the game around,’’ said Foley.

The Tigers got on the board early in the first inning when Connor Sheridan scored on a single by cleanup hitter Patrick Sears.

Rosek kept the Eagles in the game until in the fifth when miscues cost Plymouth North (16-8). After the Tigers started the inning with back-to-back singles, Luis Agrait attempted to move the runners over with a bunt and third baseman Jamie Delano charged in and tried to throw to third but his throw got away as Thomas Spring scored the Tigers’ third run. With runners on second and third, Rosak attempted to intentionally walk Sheridan but his 3-0 pitch went wildly to the backstop, allowing Joe Ciolek to score. Nathanial Flachs followed with a grounder to third which got through Delano’s legs for his second error of the inning as Agrait scored the third run of the inning for South Hadley.

“When we finally put that crooked number up and I think we kind of took a breath there and played our style of baseball,’’ said Foley.

The Tigers finished the season with a 12-13 record but they knew being below .500 didn’t show what kind of team they were.

“We always knew we were tough going in [to the tournament]. A lot of teams took us lightly and we made them pay,’’ said Page.