‘He made it happen’

Student-athlete works his way back from brain injury 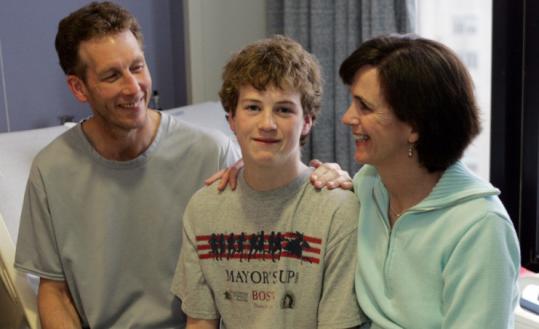 After the injury. After the rehabilitation. After the attention, and recovery, and return to the diamond and court, Matt Cook finally gets to take a breath, and just be a senior in high school.

It was in March 2007 when a stray line drive found its way around a protective screen and struck Cook, who was tossing batting practice, in the face.

Then a freshman, Cook incurred a brain injury called expressive aphasia, leaving him with symptoms similar to a stroke victim. Speech and walking were difficult for a time. But after four weeks of therapy at the Spaulding Rehabilitation Hospital in Boston, he was able to return home to Hamilton.

And 10 months after being hit, he was back on a basketball court, suiting up as a small forward for the Hamilton-Wenham varsity boys’ team.

If you speak to him now, you won’t get even a hint at the traumatic brain injury he suffered. And that’s what Cook prefers.

Instead, he wants to be known as the 6-foot-4 right-hander with an 88 mile- per-hour fastball that projects to top 90 in a few years. The senior who already has a baseball scholarship awaiting him at Northeastern University. The teen with a job at the local YMCA teaching 4- and 5-year-olds the game of soccer. The kid who will go to homecoming, the prom, and then head off to college, just like everyone else.

And not just simply as the kid who got hit by a ball and made an amazing recovery.

“People have said that to me, but for me it’s crazy to be going to college and everything now. I’m fine. Thinking back on it, it is pretty cool that I’ve gone through recoveries, gone through therapy [with success] and everything. But I just don’t really think about it.’’

It’s hard to blame him. He was a bit preoccupied during the summer, playing ball, continuing to regain his skills, performing under the watchful eye of college scouts.

He had interest from close to 30 colleges, including nine Division 1 programs, among them the University of Massachusetts at Amherst, Rhode Island, and St. John’s.

He caught scouts’ eyes at the All-Star Baseball showcase in Milton and the Bay State Games. Northeastern coach Neil McPhee offered Cook a scholarship at the Lynn Invitational.

”During the summer he did well when people were watching, and it worked out very well for him,” said his father, Tom.

His parents still remember, though, when baseball took a back seat.

“The doctors thought he had a chance, but I don’t think anybody saw him coming back as far as he’s come back,” said his father.

His mother, Ann, recounted a recent fund-raiser at Spaulding that put things in perspective.

“Seeing all these patients, one 16-year-old girl who had a head injury seven years ago spoke, and she did a great job, but her speech is still impaired and she still goes through therapy,’’ she said. “So we know it could have been much worse.’’

Normal stuff, like sports and getting ready for college, helped with her son’s recovery.

“That’s the best thing right now. I thought I would be looking at schools and everything and I knew I wanted to go to college for baseball, but I didn’t really know how early I would get into a school,’’ said Cook.

“This process is definitely really cool, but right now it just feels good to be a normal senior.’’

And he has plenty more to look forward to. School started Sept. 2. Basketball practice starts the week after Thanksgiving.

Next month, he and the rest of the Northeastern baseball recruits will spend a night on campus, and go to a hockey game. And there’s that baseball thing.

“I think he can be a dominant player in the [Cape Ann League]. I think he has terrific upside,’’ said his coach at Hamilton-Wenham, Don Hoak. “It’s a credit to him that he had that will to get back. He made it happen.’’

“I’ve just been working hard, getting back into the routine and everything, just trying to get better, and live a normal life, I guess,’’ he said. “Nothing really has changed or anything.’’

Jonathan Raymond can be reached at jraymond@globe.com.