With three ace pitchers, plus skilled relievers, team gets off to 9-0 start 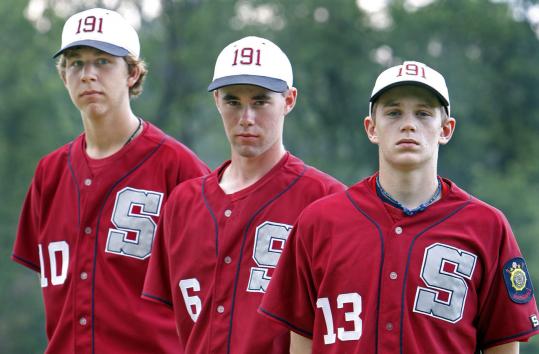 His three top starting pitchers have been stellar thus far, backed by a consistent group of relievers. It all adds up to a very deep staff for Len Noce, the veteran coach of Sudbury's American Legion Post 191, in a short season in which depth is severely tested.

How does he keep everyone sharp?

"What we've found is that we haven't really gone to the depth that much," said Noce. "I've been bringing in guys just for work. Right now, we're doing bullpen with some of the guys, just to keep them ready."

It's a dilemma shared by few American Legion teams. While most have one or two sure-fire aces, Sudbury is off to a 9-0 start in Zone 5 this summer, thanks to a trio of starters - Ryan Wood, Connor Buckley, and Sam Finn - who have all put up dazzling numbers.

The 5-foot-10-inch, 150-pound Buckley, a senior this fall at Acton-Boxborough Regional, has two one-hitters. Finn, a 6-4, 190-pound fellow right-hander headed to Rollins College, started 2-0 with two saves. And Wood, a 5-10, 160-pound lefthander entering his senior year at Lincoln-Sudbury Regional High, threw a perfect game on June 24, and has allowed just five hits in three starts.

Finn's success has not been a surprise. But Buckley and Wood were coming off high school seasons this spring in which they had struggled a bit.

The key for Buckley has been the addition of a consistent changeup to his repertoire, Noce said. As a result, he's been able to keep batters off balance, mixing in his off-speed pitches in different counts.

Buckley said he rarely threw his changeup during the high school season, "but I've worked on it. I just came up with it this year. I used to be just a two-pitch pitcher."

Wood is a bit more of a craftsman, as one of the few lefties in the area to throw a knuckle-curve. But the real key for him has been an increase in first-pitch strikes.

He says when he gets behind in the count, "it's real tough for me to come back. But when I get ahead of batters, I usually get to go for location."

All three credit excellent defense, though, when asked about their early successes.

Wood noted that in his perfect game against Newton, shortstop Mike Wilson made some great plays, including a diving stop of a liner up the middle in the bottom of the fifth that helped seal the game.

And with all the new players in the lineup - only five returned from last season - pitching and defense have been crucial. The offense has struggled in much of the early season, as the team is barely hitting .300.

"Our offense is just not where it needs to be right now. I think we've made a lot of base-running mistakes," Noce said, and need to keep focus.

Bryant showing versatility in field
Jessie Bryant was a fixture at second base in Marlborough High's run to the Division 1 Central final last month. This summer, she is earning praise for her ability to shift positions and be an impact player for the Polar Crush, an elite softball program based in Worcester.

During the weekend of the state high school tournament, the Crush traveled to Pennsylvania with just nine players, prompting head coach Robyn King to move Bryant to center field.

Even better, Bryant's play in center field has drawn the attention of Division 1 college programs, such as Fairfield University, Providence College, and Hofstra University.

"She's kind of another one with a certain presence about her. She leads mostly by example," King said. "She's good with what she says and how she says it, and she works harder than anybody I've ever known."

Nicole D'Argento, the state's high school Player of the Year while pitching Ashland High to the Division 2 state title, joined the Crush last weekend. She has been used sparingly as a result of a minor back injury, but King said she'll be fine.

In 17 innings, D'Argento has struck out 26 while allowing seven hits and no earned runs. She's also batting .500, with an .832 slugging percentage, after 16 plate appearances.

The Crush were in Boulder, Colo., through today playing in an Independence Day Tournament. Next month, they will travel to Oklahoma City to play in the ASA Gold National Championships.

More than one area coach has compared D'Argento on the mound with King, who starred at North Middlesex Regional in the mid-1990s. D'Argento, like King, excels at changing speeds.

"I certainly take it as a compliment myself," said King. "If people want to compare her to me, I'll take it."

Short but sweet
After a rough start, has Framingham's American Legion Post 74 turned the corner? Coach Bunkie Smith's club recorded back-to-back wins for the first time this season, shutting out Sturbridge and Shrewsbury.

Natick Post 107, meanwhile, improved to 7-2 with a nine-inning thriller against Wayland on Tuesday.