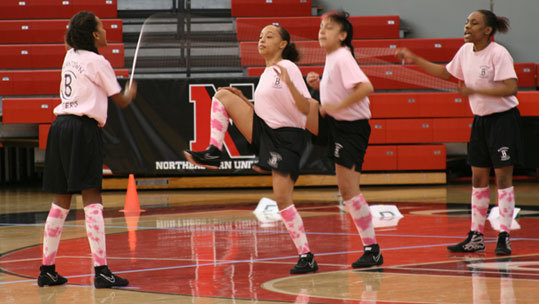 When Janelle Vazquez and Juliette Silva first competed in the American Double Dutch League World Championships in South Carolina as fifth graders two years ago, they watched in amazement as competitors landed flips during their jump rope routines.

Later that year, Vazquez and Silva - who have competed with the Beantown Jumpers since second and third grade - incorporated flips in their own routines.

Silva, 13, added: “It’s kind of like when you first learn how to ride a bike, you’re super excited.’’

But that joy only came after a multitude of hesitations and failures.

“We just laughed and tried to do it again.’’ Vazquez said of their failed flips. “We learned it that same year because we wanted to get a chance to go [to Worlds] again but we knew it would take time to get there because we had a new jumper with us.’’

The Timilty Middle School seventh graders failed to return to the World Championships last year after their partners dropped off the team. In fact, the J’s - as they are known on their team- have had new partners for each of the six years they’ve competed in Double Dutch tournaments.

The J’s will get another shot to qualify for Worlds on Saturday in the Massachusetts State Double Dutch League Tournament from 9:30 a.m. to 2:30 p.m. on Solomon Court at Northeastern University.

“They definitely have the drive and determination, the girls are more than capable of rising to the challenge and being pushed to the next level,’’ Beantown Jumpers founder and coach Patti Travers said of Vazquez and Silva, who finished sixth at Worlds two years ago along with Gemane Pires. “These two girls are so resilient, they changed partners every year and it hasn’t been because they wanted to, let’s put it that way. They changed each year whether because other kids were not staying or were not interested in Double Dutch. These two have, they were able to stay interested all this time. They are to the point where they are my assistant coaches on the team.

“They are very masterful, they are creative and they are resilient to each bump that comes along. If something doesn’t go right they have the ability to change and they also show great signs of leadership. They are great young girls.’’

Double Dutch has “singles teams’’ comprised of one “jumper’’ and two “spinners’’ who turn the rope. A “doubles’’ team has two spinners and two jumpers.

Teams are judged on compulsory (a pre-established set of required tricks including turns, crisscross jumps, and high knees), speed (number of jumps per two-minute period) and freestyle routines that include acrobatics, dance steps and rope tricks, pushups, and leg kicks. The teams that earn the most points Saturday will advance to the 39th annual Double Dutch World Invitational Tournament from June 14-16 in Sumter, SC.

Competitive Double Dutch took off in Massachusetts in 1995 when the Red Auerbach Youth Foundation started conducting demonstrations, trainings, workshops and tournaments throughout the state, but primarily in Boston.

The foundation collaborates with Sport in Society at Northeastern University to run the Double Dutch League of Massachusetts and serves more than 600 youth annually, according to the Auerbach Youth Foundation website.

Two years ago, the Auerbach Foundation and Sport in Society teamed up with Boston Public Schools, the PlayBall!, DreamBig! and the Women’s Sport’s Foundation to start a Double Dutch Program in Boston’s middle schools. The program, JumpBoston!, began with six schools and about 100 students but has since expanded to 10 schools and 160 jumpers, according to the Auerbach Youth Foundation’s website. Travers said the goal is to expand into Boston’s high schools.

There are also several smaller community center-based organizations around the city that run their own Double Dutch teams.

Travers, a former BPS physical education teacher who now works for the Quincy Catholic Academy, started Beantown Jumpers at the Timilty and Mildred Avenue Middle Schools in Boston about 15 years ago and has expanded to Quincy, Pembroke, Wakefield, and Westwood. They have about 50 students at each location, Travers said. Beantown Jumpers performs several demonstrations each year at events and health fairs to help raise money for its programs.

“When we started I feel that there were less people interested, and now I think we’ve inspired kids when we do our demos,’’ Vazquez said.

Vazquez began doing Double Dutch as a young girl in her Dorchester neighborhood and wrote a paper about it in the second grade. Her teacher recommended that she join Beantown Jumpers and she’s been jumping ever since.

Silva picked up the sport in third grade when Travers approached her about joining the Beantown Jumpers. Silva said she didn’t know how to jump and Travers said she’d teach her.

“The hardest part was getting into the rope, as soon as I’d get in I didn’t know when to start,’’ Silva said. “When I just tried before with friends they weren’t patient with me because I didn’t know how to do it. When I tried with the team I felt I learned a lot within the first year.

“[My coach] has helped improve my attitude and with my confidence. Without Double Dutch I don’t think I’d be doing sports at all because sports never interested me.’’

Vazquez and Silva quickly built a rapport and have been jumping together ever since. But they said it has been frustrating trying to bring new teammates up to their speed. But they clicked right away with their current partners: O’Bryant seventh grader Rachel Wynn and Mildred Avenue Middle School seventh graders Joselyn Cotto and Ella James.

The girls, who finished first at the Red Auerbach Invitational Double Dutch Tournament in April, hope to continue jumping together throughout high school.

“They are really into the sport and didn’t get frustrated when we tried to teach them new moves, they actually listened,’’ Vazquez said.

Wynn also knows how to do flips and will try to execute one in the team’s routine this weekend.

“I’ll be happy to make it,’’ Vazquez said of qualifying for Worlds. “To be able to say we made it so far would feel good.’’

And landing a flip in South Carolina will feel even better.

“If we accomplish the flip I’ll be proud of my team,’’ Vazquez said.

Justin A. Rice covers Boston Public school athletics. He can be reached at jrice.globe@gmail.com.