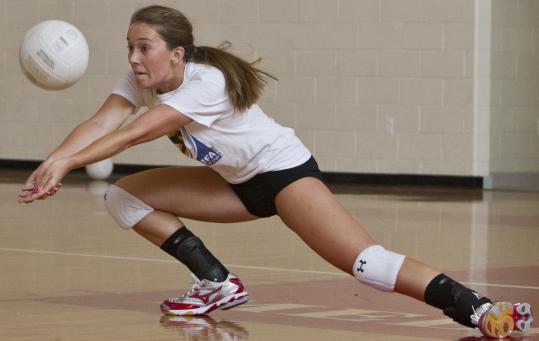 Melrose head coach Scott Celli predicts that Sarah McGowen will be “one of the top hitters in the conference.’’ (Matthew J. Lee/Globe Staff)
By Cat Calsolaro Globe Correspondent / September 1, 2011

The gymnasium at Melrose High is filled with girls in knee pads, serving, blocking, and setting volleyballs. Their sneakers squeak across the shiny wood floor that hardly cushions their digs and dives, sparing no one from bumps and bruises, evidence of the hard work this team puts in day after day at practice.

Glance at their faces and there are only smiles. They are passionate about the game and they love to play together. Their chemistry is electric with constant chatter as they slap fives all over the court.

The Red Raiders finished 21-3 last season, capturing the Division 2 North title, reaching the state semifinals for the second year in a row after sharing the Middlesex League title with Reading.

Melrose returns all but one player from a year ago and is poised to make an even deeper run into the state tournament.

“Experience is huge,’’ said head coach Scott Celli. “We were a sophomore-dominated team, and having that year under their belts can only help us.’’

Senior captain Jill Slabacheski added: “We know what playing in tournament games feels like. We can take what we know from being in that situation before, and hopefully ease the nerves of the younger players.’’

The Red Raiders’ attack starts with setter Brooke Bell, a Middlesex League all-star who finished fourth in the state last season with 600-plus assists.

During the offseason she plays club volleyball for the Pumas, a Junior Olympic development team, along with six of her Melrose teammates, and also competed in the Bay State Games earlier this summer.

“It’s good to play against the best kids in the state, and we got a lot of playing time as well,’’ said the junior cocaptain. “I try to keep a hand on the ball over the summer because if you don’t, it’s too hard to catch up again.’’

“We played with a lot of girls from Andover, Central Catholic, and Bishop Fenwick,’’ said the junior middle hitter. “We got to see how they all play, which you can really use to your advantage during the season.’’

Together, Bell and McGowen form a potent combination.

“Brooke is very deceptive,’’ said Celli. “You think she is going to set it and then she dumps it. And she has great court awareness; she understands where every player is on the court.

“Our setters have done an unbelievable job,’’ said senior cocaptain Alyssa DiRassaele. “Brooke does a great job getting to the ball as quickly as she can and makes the best plays to set up our attackers. She keeps us composed on the court and just does what she’s supposed to do.’’

Celli predicts the 5-8 McGowen, on the short side for her position, will be “one of the top hitters in the conference.’’

She has been working hard in the offseason with the Pumas and thinks she can help her team achieve even more this season.

“Sarah has definitely improved a lot,’’ said Slabacheski, who got to see how all her teammates advanced their games since last season at captains’ practices held on Sundays throughout the summer.

“She is a great middle on both ends of the floor; she uses the blocks well. She looks to see what she has to work with and uses it to her advantage.’’

Celli reminds his team that their talented attackers would be wasted without an effective defense.

“Volleyball really starts from defense,’’ said McGowen. “We’re lucky to have a great defense that helps Brooke set up our offense. We have to get that first pass to Brooke if we’re going to get the next point.’’

“Our strongest piece is our defense,’’ said Celli. “There isn’t a weak link in our back row.’’

Melrose has earned the respect of coaches in the area.

“They are always well-coached,’’ said Bishop Fenwick coach Adam DeBaggis, whose squad lost to Melrose in the Division 2 North final. “It’s one thing to have a good team every now and then, but Melrose is always hard to beat.’’

Although the Raiders are focused on a three-peat in the North, they must first tackle their regular season schedule, which includes traveling to Central Catholic and Lincoln-Sudbury and playing Westborough and Bishop Fenwick at home.

“We want to be able to step up and play to the best of our ability against those harder teams,’’ said Bell. “And when we play teams who aren’t as good, we still want to play our best; we don’t want to play down to their level.’’

Last year Melrose tied Reading for first place in the Middlesex League - they only lost to each other in league play. Melrose won 3-0 on the road and Reading came back to take a 3-0 win later in the season.

“They are our biggest rival,’’ said Celli. “And they have a good nucleus coming back this year.’’

With Arlington and Wilmington joining the Middlesex League, Melrose and Reading will only meet once during the regular season, a week from Friday at Reading.

“We were a young team last year and we didn’t know how far we could go,’’ said McGowen.

“This year we’re a little older. We’re going to take it one game at a time and not look ahead until we reach our goal of making it to the finals.’’

Cat Calsolaro can be reached at catcalso@bu.edu.