Teens training too hard, too often 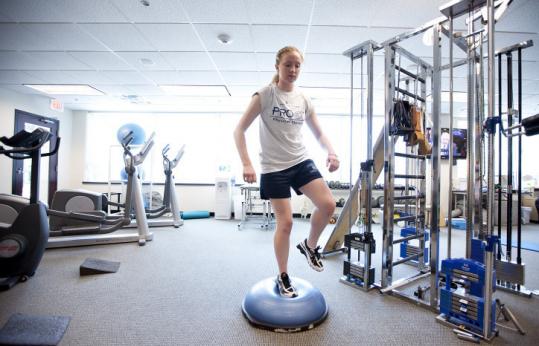 Amanda Keane breathes basketball. The Wilmington 17-year-old has been competing four seasons a year since the fifth grade, and has had hip surgery for an overuse injury to prove it.

When school lets out for the summer, she’ll ratchet up the ante, adding camps to her team play. “I wake up,’’ Keane said, “play basketball, go home, and go to bed.’’

Summertime has become prime time for legions of hyper-competitive young athletes to pound, pitch, and pursue their athletic passions, producing ever more injuries.

Surgeons and physical therapists say they see an epidemic of overuse — fractures, tears, and worn-down joints — in children who are playing at higher intensities and at younger ages. Surgeries to repair shoulder, elbow, knee, and hip injuries, once thought to be adult fare, are being routinely performed on preteens and teenagers.

“We can repair these injuries and get them back up and playing . . . but we don’t have evidence of what they will be like 20 years from now,’’ said Dr. Mininder Kocher, an orthopedic surgeon who specializes in adolescent sports medicine at Children’s Hospital Boston.

“All of these injuries,’’ he said, “predispose them to arthritis.’’

Because young athletes’ bones are still growing, they are vulnerable to problems in the growth plates, the soft cartilage at the bones’ ends.

“Kids try to play through the pain,’’ Kocher said. “If they continue to play, that could result in a growth-plate problem; it may not grow altogether, or part may grow at a different rate, so you can have one leg longer than the other.’’

Kocher is part of a new nationwide coalition of medical and sports groups, including the American Academy of Orthopedic Surgeons, that recently launched a public awareness campaign, dubbed STOP Sports Injuries, aimed at reversing the rising tide of strained and broken young bodies.

Although precise data are hard to pinpoint, numbers assembled by the coalition suggest that overuse is responsible for nearly half of all sports injuries to middle and high school students. And according to the US Centers for Disease Control, more than half of all children’s sports injuries are preventable.

Matthew McManus, a physical therapist at Proex Physical Therapy in Woburn, said he is seeing an increasing number of young athletes with hip impingements, a tearing of the cartilage in the joint.

That’s the injury he treated Amanda Keane for two years ago, after her surgery at age 15. She’s now seeing him for a knee strain, in the anterior cruciate ligament, or ACL, also an increasingly common injury among young athletes, particularly young women. Doctors aren’t sure why girls are more prone to the injury but suspect it may be in part because they haven’t developed the muscle mass needed to stabilize their legs during and after growth spurts.

“We’re seeing kids 12 to 18 years old who are nowadays specializing in one sport, because I think the professional model has been pushed down to the collegiate ranks, then high school ranks and then pushed down to the AAU [Amateur Athletic Union] programs,’’ McManus said.

Specializing in one sport at a young age often leads to overuse injuries, he said, because the athlete is repeating the same motion over and over again in the same area of the body, leaving him or her more vulnerable to degenerative joint problems.

“If they are not being taught the right way or being given an appropriate stretching, these kids are also developing chronic strain injuries,’’ McManus said.

But getting some young athletes to give their bodies a break can be tough. Just ask Keane’s dad, Jay Keane, who also happens to be her high school basketball coach.

“She definitely wants to play sports at the next level, in college, and to do that you have to work on your game,’’ he said. “We make her take the whole month of August off, except for her going to the gym.’’

Dr. Mark Lemos, an orthopedic surgeon and director of sports medicine at the Lahey Clinic in Burlington, said he often finds with his injured young patients that the competitive push is coming as much from the parents as from the children. Lemos understands that tug. He is a former collegiate hockey player who played professionally in Europe, and has two athletic children, aged 12 and 13.

“Sometimes we have to shut kids down so they can have a good life in the future,’’ he said. “For me, it’s the game long-term, not next week.’’

Cross-training. Encouraging young athletes to branch out and try one or two other sports that would help build up other areas of the body and give the overused parts a break.

“Multiple sports will benefit them at all levels,’’ Lemos said. “Even guys who play professional sports cross-train.’’

While hoping to shine a spotlight on overuse injuries in young athletes, Lemos and others say they don’t want to overshadow the many benefits kids reap from participating in sports.

“Medically speaking, these kids have lower rates of diabetes, and have heart health,’’ said Kocher, the Children’s Hospital surgeon. “The adolescent athlete is less likely to have drug use, has higher self-esteem, and ultimately higher rates of success in life.’’