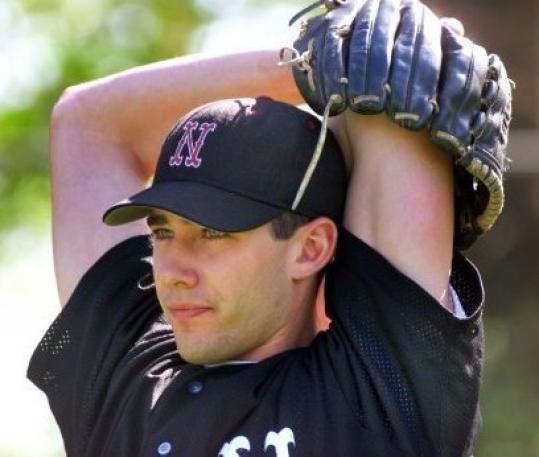 Greg Montalbano warming up to pitch for Northeastern in 1999.
By Marvin Pave Globe Correspondent / April 22, 2010

Greg Montalbano left his mark on the baseball diamond at St. John’s High in Shrewsbury, Northeastern University, and as a minor-league prospect with the Red Sox. He lost his long battle with cancer last August, and on May 15 Montalbano will be remembered when his alma mater, St. John’s, hosts his hometown team, Westborough High.

Prior to the 3:15 p.m. match, an alumni baseball game — including players from Montalbano’s 1995 graduating class — will be played at noon, followed by a 2 p.m. reception. At 3 p.m., a brief ceremony will be held to dedicate a permanent monument to honor Montalbano.

Members of his family will attend and throw out a ceremonial first pitch.

Remembered with a moment of silence at Fenway Park prior to Boston’s game against the Yankees last Aug. 22, the day after his death at age 31, Montalbano was one of the greatest pitchers in Northeastern history, earning All-America honors his junior and senior seasons. He finished his career as NU’s career strikeout leader (217), with a 2.55 earned-run average and 19-7 record.

The lefty hurler, who received the ECAC Award of Valor and the New England Hero Award from Northeastern’s Center for the Study of Sport in Society, was drafted by the Red Sox in the fifth round of the 2000 amateur draft. He later pitched for the Worcester Tornadoes of the Can-Am League and was an assistant baseball coach at St. John’s.

Montalbano also assisted with many Jimmy Fund events and spoke during several telethons to raise money for cancer research.

Sharon Montalbano, Greg’s mother, said St. John’s coach Charlie Eppinger told the family in December about his plans to hold the game in her son’s honor.

“We’re very pleased and humbled that St. John’s has chosen to remember Greg, and what better way than with a baseball game, the game he loved so much,’’ she said, noting that her husband, Andy, would most llikely throw out the first pitch. She said a ceremony to rename a Little League field in Westborough for her son is planned for June 12.

Haydenette skaters medal at worlds
Several area members of the Haydenettes of Lexington celebrated a bronze medal performance at the recent ISU World Synchronized Skating Championships, the final event of the competition held in Colorado Springs.

It was just the second medal for a US team in the 11-year history of the world championship, and the first for the Haydenettes, the reigning US gold medalists and 18-time national champions.

“We set a goal together to do what it takes this year to win a medal in our home country,’’ said head coach Saga Krantz. “They clearly earned and deserved these medals.’’

The Haydenettes’ most experienced skaters, Kendra Flanagan and Taylor Parrish of Lexington, were participating in their seventh world championship, and 13 of the 20 team members also had international experience.

“Winning our first world medal was special after coming so close with a number of fourth- and fifth-place finishes,’’ said Flanagan, a senior at University of Massachusetts Lowell. “This is a special dream come true.’’

Parrish said the bronze medal was the culmination of 12 years of competing at the highest level, including commuting for three years from the University of New Hampshire to train and practice.

The Watertown contingent includes a trio of starters — junior center fielder Steve Tramontozzi, a recent MASCAC Player of the Week who was leading the Rams with nine doubles and 34 RBIs; junior catcher/first baseman Danny Chaisson, who was batting .287 with a team-high 25 runs scored; and junior catcher/DH Sean Callahan, a .318 hitter. Senior Marc Massarotti, another Watertown High alum, had two stolen bases in as many attempts.

“Steve has been All-Conference the past two seasons,’’ said Rams head coach Brian Blumsack, who is assisted by his brother, Scott, and Mark Piantedosi, a former Waltham High and Suffolk University player. “He’s a patient hitter who approaches the game the right way and plays hard. Danny hits cleanup for us, is a power guy with a good bat, and a good defensive catcher. Sean has come up with some clutch hits, including the game-wining homer in our second conference game, and Marc is a defensive replacement who gives 100 percent all the time.’’

Also on the Rams roster are junior reliever Matt Magazine of Marlborough (Assabet Valley Regional), who was 2-0 with a 2.53 ERA; senior first baseman/DH Ryan McCarthy (Shrewsbury High), who was batting .286; starting left fielder Will Crofton, a freshman from Hopkinton (Marian High) who was among the team leaders with a .318 batting average; and junior pitcher Jimmy Borden (Lexington High).

“Matt’s our go-to guy out of the bullpen,’’ Blumsack said. “He throws strikes and his velocity has improved. Ryan is a four-year player who swings the bat well. Will bats number two or number three and has worked himself into the lineup. And Jimmy gives up pitching depth.

“As a team we’re heading in the right direction, especially with a deep pitching staff.’’

Marvin Pave can be e-mailed at marvin.pave@rcn.com.