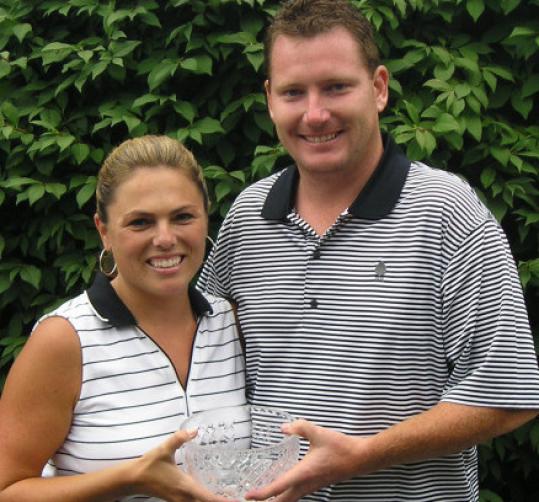 Waltham residents Eric and Sara Libin McPhail accomplished a rare feat recently at Oakley Country Club in Watertown, where they both won their respective club championships.

It marked only the third time that a married couple has won the men’s and women’s titles at Oakley, which was founded in 1898.

According to club historian Carolyn Boday, Mr. and Mrs. Edwin W. Daley won club championships in 1916, and Lyn and Diane Olmstead were winners in 1977.

A scratch golfer and six-time qualifier for USGA events, Eric McPhail has played in 15 Massachusetts Amateur championships. He was a state Public Links champion in 1998 and 2001 and state junior champ in 1991, and was the Independent School League individual champ while at St. Sebastian’s in Needham. He also set a course record (63) at George Wright Golf Club in Hyde Park while qualifying for the national Public Links tournament.

The Merrimack College graduate shot rounds of 71-75-72 -218 for a one-stroke win in the medal play men’s championship, after trailing by two strokes going into the final round on Aug. 9. Runner-up was three-time club champion Stephen Kilcoyne of Belmont.

When McPhail’s round was completed, he walked over to the 15th hole where his wife of 19 months was competing in the match play women’s final. Sara, who literally grew up as a golfer at Oakley, closed out the match, 2-up, on the 18th hole against Lacey York, a former varsity golfer at the University of Notre Dame.

“I was a little nervous because it seems like I’ve been runner-up about a million times, and Lacey is a terrific golfer,’’ said Sara, who played on golf teams at Lexington High and Stetson University in Florida. “My match was very close and I didn’t know how Eric had done. But when I saw people shaking Eric’s hand I had a feeling he was a winner.’’

Club member George Konstantopoulos caddied for Sara, who said “he was my coach and cheerleader. I could not have done this without him.’’

Sara, whose parents, Mike and Carol Libin, are longtime Oakley members, teamed with her dad earlier this summer to win low net honors in the club’s parent-offspring tournament.

Canino to join Westfield State’s hall of fame
Former Watertown High football and track standout Carlos Canino will be among six inductees to the Westfield State College Athletics Hall of Fame during the school’s alumni weekend in October.

Canino (class of 1988) was an All-Massachusetts State College Athletic Conference defensive back and special teams player who set 14 school records, eight of which still stand, and at one time held the New England record for most punt-return yards (364) in a season.

As a senior captain, Canino offered to play offense when the team was hit with injuries and responded with 90 rushing yards in a game against UMass-Lowell.

Canino, who majored in criminal justice, is a special agent with the Federal Bureau of Alcohol, Tobacco and Firearms. He is posted in Mexico City as an adviser to the State Department and the Mexican government on firearms trafficking.

Red Sox vice president Joseph F. McDermott went above and beyond his job description as the team’s security and stadium operations chief, having worked 2,323 consecutive home games at Fenway Park from 1975 to 2004,

The Medfield resident, who died at his home Aug. 16 after a courageous nine-year battle with prostate cancer, was a self-taught meteorologist who helped predict if an incoming storm would affect that day’s game.

“Even though he never formally studied weather forecasting,’’ said his sister, Barbara Connelly, “he was a great help to the Red Sox as far as predicting storms which might involve cancellations or rain delays. He had the Weather Service on his computer, and if he was sick, he’d call the Fenway groundskeeper from his home with a weather update.’’

McDermott, who brought cheer to fellow patients at Massachusetts General Hospital by letting them hold and wear his World Series ring, will be remembered by the team through the creation of the Joseph F. McDermott Excellence in Service Award, to be given at the end of each season to the most outstanding game-day employee.

“Joe McDermott did not just work for the Red Sox; he was ‘of’ the Red Sox. He was our ‘Iron Man’ and an unforgettable, indispensable part of the Fenway Park family,’’ said Red Sox president and CEO Larry Lucchino.

Riggert joins Delaware women’s soccer team
Sarah Riggert of Groton, who starred in soccer at Lawrence Academy in her hometown, has begun practice as a freshman on the University of Delaware women’s soccer team. A versatile player who played forward and center back, Riggert was a two-time team MVP and Independent School League All-Star and an All-State selection in prep school.