They have miles to go before they play 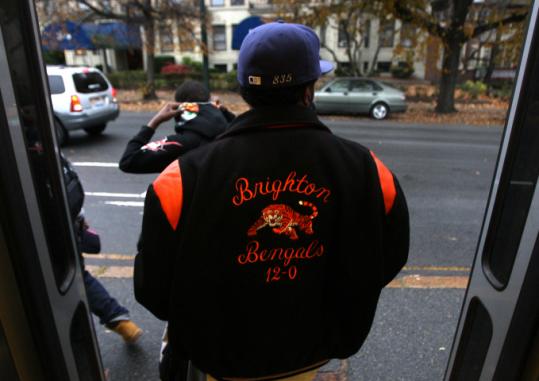 Long daily rides on the T are not unusual for athletes such as Michael Finklea of the Brighton football team. (Essdras M Suarez/Globe Staff)
By Bob Hohler Globe Staff / June 24, 2009
Text size – +

One alarm clock was never enough. Not for Alex Tisme, who needed to rise in his Hyde Park apartment at 5 a.m. to begin his daily commute to Brighton High School. A four-year lineman for the Brighton football team, Tisme typically returned home from practice at 9 p.m. and studied until 1 a.m. for his advanced placement classes.

He needed a second alarm: his cellphone.

Out the door by 5:25 a.m., Tisme would make the kind of grinding commute on the MBTA that distinguishes most student-athletes in the Boston schools from their suburban counterparts. In a daily ritual that demands unflagging discipline and dedication to their teams - students who are late or absent from school risk losing their athletic eligibility - Tisme and thousands of others crisscross the urban grid on public transportation, often spending more time on subways, trolleys, and buses than they do practicing their sports.

Before dawn, Tisme would hike seven minutes from his home to Cleary Square, where he boarded the 32 bus to Forest Hills. From there, he rode the Orange Line to Roxbury Crossing, where he waited for the 66 bus to deliver him in time to slog up the steep driveway at Brighton High before the first class at 7:40 a.m.

The T claimed another chunk of Tisme’s time when he needed to ride the Green Line up Commonwealth Avenue after school with his Brighton teammates to reach their practice field at Cleveland Circle. Every night that he returned home without incident was another victory over one of the hardships of succeeding as a student-athlete in Boston.

“Somehow I survived,’’ said Tisme, who plans to play football for Hamilton College next year on a full scholarship the Posse Foundation awards to public school students with exceptional academic and leadership potential.

Laborious commutes complicated life for many other student-athletes, including Matt Delosh of West Roxbury, who played hockey for Snowden International at Copley and practiced at Cleveland Circle; Jamie Lee Higgins of Dorchester, who attended Fenway and played hockey for Snowden; and Samuel Andre of Hyde Park, who played tennis for O’Bryant in Roxbury and needed to take three buses to get home from practice in Dorchester.

Though many students said they have been attacked or robbed going to or from school, the mere challenge of relying on the T to get home sometimes was harrowing enough. After a Friday night football game, Charlestown coach George Farro received an early-morning call from the State Police informing him one of his players was missing. It turned out the player missed the last Orange Line train out of Sullivan Square and walked 8 miles home to Brighton.

For decades, students have endured long commutes for better educations at Boston’s elite exam schools. Now, many students are assigned to schools across the city, while others choose to make lengthy treks. Tisme and his football teammate, Miguel Pena of Jamaica Plain, said they chose Brighton because its MCAS scores seemed good and they hoped the school would provide them a better education because it was in a predominantly white area.

Perhaps the longest commute among Boston’s student-athletes began every morning in Lynn, where Durrell Thomas walked to the Central Square commuter rail station. His mother moved from Dorchester to Lynn last summer to save money on rent, but Thomas wanted to return to Hyde Park High School for his senior year of football.

“I just love football that much,’’ he said.

Thomas was a weekday regular on the Rockport-to-Boston line that departed Lynn at 5:53 a.m. and rolled into North Station 23 minutes later. He transferred there to the Orange Line for a 30-minute trek to Forest Hills. The 32 bus carried him up Hyde Park Avenue for his last leg of the trip, a 10-minute walk to school in time for the first class at 7:45 a.m.

“I get here on the dot,’’ he said one night after practice.

As usual, he got home that night about 8:45 p.m., ending another 15-hour day in the life of a Boston Public School student-athlete.