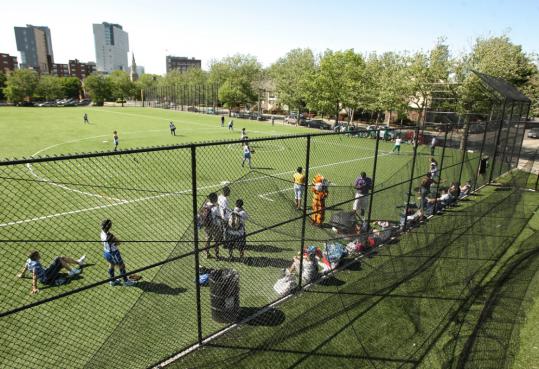 Every new sports season in the Boston public schools starts with a reminder to all coaches: An athletic trainer is available for injured players. Trouble is, there is only one trainer for thousands of student-athletes in 18 high schools scattered over nearly 50 square miles of the city. To no one's surprise, only a small fraction of injured players receives treatment from the trainer, Flo Russo, because of the trouble reaching her office at the Reggie Lewis Track and Athletic Center in Roxbury.

Imagine telling kids on crutches in distant corners of the city to ride the T alone to Roxbury and find their way to Russo's office .

Even worse, said East Boston headmaster Mike Rubin, are the number of students whose injuries go undiagnosed or are inadequately treated because of the shortage of trainers.

“I had one kid with a broken ankle and another with a broken clavicle, and I didn't realize it,'' said Rubin, the school's former basketball coach.

That's life for students in Boston's high school athletic system, many of whom practice in substandard conditions with too little gear and too few services. All too often, they are left to get by with the help of strangers, from physical therapists who contribute free care to grocery shoppers who donate spare change to help them buy equipment the city does not provide.

“The lesson the kids get is that the adults don't care about them,'' said Ben Okiwe, who recently resigned as boys basketball coach at Lincoln-Sudbury to help Boston's disadvantaged youths through his nonprofit organization, Young Savants.

In February, Okiwe attended a boys basketball playoff game between his alma mater, Boston Latin Academy, and Belmont, and watched a Latin Academy player hobble to the bench in pain. With no athletic trainer on site, Okiwe attended to the player, who was suffering from leg cramps.

“If there was a problem like that in the suburbs,'' Okiwe said of the trainer shortage, “it would be fixed.''

Russo, who also serves Roxbury Community College, said she does the best she can. But she almost never treats injured players from distant schools such as West Roxbury and East Boston, and the vast majority of her high school patients attend nearby Madison Park and O'Bryant.

“It would be nice if the city paid for a full-time assistant so we could get out there and help more kids,'' Russo said, “but I don't think that's going to happen because of the budget cuts.''

The city's athletic director, Ken Still, is working with Boston University to try to enlist more trainers through a grant program. Meanwhile, Kennedy Brothers Physical Therapy fills some of the gap by providing free care to Boston's injured student-athletes.

“We do it because of the incredible have-nots in the city,'' said owner Jake Kennedy, who chaired the urban subcommittee of the Governors Committee on Physical Fitness and Sports. “It's unbelievable what the city kids don't have, and their facilities are horrible.''

Budget disparity
Across the city, from the Charlestown football team training on a second-hand blocking sled spattered with bird droppings under the Tobin Bridge to the Hyde Park team trying to compete without weight training equipment, many other needs remain unmet. Many coaches try to make do by dipping into their personal savings, organizing fund-raising drives, or asking students to solicit spare change.

“We can't run teams on what the city gives us,'' said Robert Anthony, who coaches hockey at East Boston and has spent thousands of his own dollars on equipment, facility upgrades, and ice time.

The city allots high school football programs $1,700 a year to equip their varsity and junior varsity teams, while the annual budgets for other athletic programs range from $400 for cross-country to $900 for hockey. By contrast, Lincoln-Sudbury spends more than $4,800 a year just to equip its football team.

Most school districts in Massachusetts, like Lincoln-Sudbury, rely on user fees and boosters to support their athletic programs. Boston, whose student population is overwhelmingly low-income, funds its sports programs through the city budget, and few teams have enough to go around.

“Every coach at every school has to do some kind of fund-raising to meet their team's needs,'' said Michael Viggiano, whose Madison Park baseball team last month won the city championship. “It makes you wonder where athletics are on the totem pole in the Boston schools.''

Boston's high school equipment budget has not increased during athletic director Ken Still's six years on the job. During that time, the price of basic football helmets has more than doubled to $150 from $60, while the cost of other essentials has mushroomed.

“Steady doesn't work,'' Still said of the budget. “Things cost more, so the kids have less.''

One exception is the girls basketball team at English High School, whose coach, Ernie Green, said he considers the program's $800 annual budget generous. In past years, Green said, he shared his leftover equipment money with the school's football team.

“We definitely have an advantage because of it,'' Rubin said. “It has been a huge part of our success in athletics.''

Alumni groups at Boston English, Latin Academy, and O'Bryant have helped their sports programs. But Latin is the only Boston school that can match suburban athletic programs in booster support. Canton's community supporters, for example, donated $180,000 last year to high school sports, while booster clubs at Lincoln-Sudbury and Walpole each gave more than $100,000.

The disparity was stunning when Martha's Vineyard eliminated South Boston from last fall's football tournament. The Vineyard team, bolstered by $50,000 in booster support, dressed more than 40 players in the finest gear, while Southie fielded only 17 players, some of them in ragged uniforms and cleats. The Vineyard coaches, whose touchdown club pays for their scouting trips, communicated through headsets against their ill-equipped Southie counterparts and won the game, 42-14.

Forced to improvise
The nonprofit Good Sports has eased some of the hardship by donating nearly $200,000 worth of athletic equipment to the Boston schools since 2005. Other charities have helped, including the Mark Wahlberg Youth Foundation, which has donated to Dorchester High.

“Unfortunately, we can only do so much for the Boston schools,'' said Christy Pugh Keswick, the chief operating officer of Good Sports. “We can give them equipment, but we can't solve their other issues.''

There is little Good Sports can do about the Hyde Park and Brighton football teams practicing on poor fields without goal posts. The Snowden basketball team plays in a cramped gym in the South End without seats for spectators.

Numerous outdoor teams have trained at remote sites without restrooms, including the Brighton football team, which routinely trudged to bathrooms at a restaurant in Cleveland Circle until City Councilor Mark Ciommo helped unlock a field house that had been shuttered for years. The decrepit facility has no running water, however, so the city last fall delivered a portable toilet to the field.

At Franklin Park, the four soccer teams from Latin Academy - varsity and JV boys and girls - share a practice field that has no soccer goal.

“That adds insult to injury,'' said boys varsity coach Dennis Allen. “If nothing else, it would be nice if our kids could practice shooting at a proper goal.''

At least Allen's team had enough uniforms. Members of the Latin Academy track team, like Charlestown and others, have so few uniforms that they need to share them during meets. “It's pretty gross,'' said Latin Academy coach Brian Leussler.

Troubling, too, was a maintenance snafu that caused the city to temporarily close a number of pools during the high school swim season, prompting swimmers to drop off several teams.

“The city kicked us to the curb like yesterday's rubbish,'' said East Boston swim coach Dave Arinella, who logged his 250th career victory in the shortened season. “We had no pool for 3 1/2 weeks, and all we could do was watch DVDs about swimming.''

Many outdoor teams have benefited from the construction of artificial turf high school fields at Charlestown, English, South Boston, and East Boston, as well as Madison Park and O'Bryant, which share a field. However, the scoreboards have not worked for years at South Boston and Madison Park/O'Bryant, significantly diminishing the game experience.

One major benefit for Boston high school athletes is the Reggie Lewis Center, a premier indoor track venue. Most of the city's high school track teams train and compete there. But because the center is available to the Boston schools only from 2-4 p.m., teams at schools with late release times like Boston English (3:35 p.m.) are relegated to practicing in school hallways.

English's disadvantaged athletes finished no better than third in the 22 individual events in the Boston City League championships in February.

“We would be a much better team if we weren't practicing on the fifth floor of our school,'' said English captain Abel Burgos. “If we could train on a track, we would have more endurance and learn more strategies, like how to run in lanes and pace ourselves.''

Charlestown track coach Kristyn Hughes said much of her job involves hunting for equipment that colleges or suburban schools plan to discard so she can meet her program's basic needs. Despite the deprivation, though, her boys team won the state outdoor title last year and the indoor championship this year.

“Because of everything we have to go through, it feels like such a sense of accomplishment when we win,'' Hughes said. “It's like, ‘Wow, we beat the system. We beat the odds. We overcame all the negativity surrounding inner-city schools and did something positive.' ''