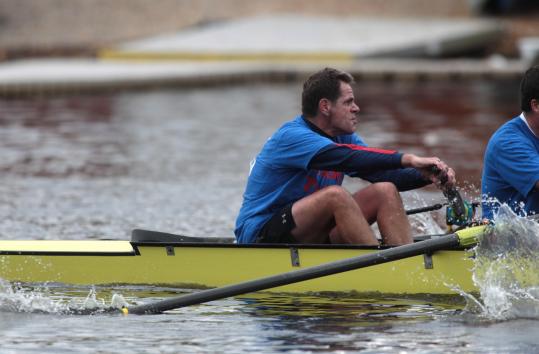 Mike Teti, coach at Cal and for the US men’s eight team, made his annual Head of the Charles appearance in the 87 Gold boat. (Essdras M Suarez/Globe Staff)
By John Powers Globe Staff / October 23, 2011

Mike Teti had coached Uncle Sam’s big boat for three quadrennia, won a gold and a bronze at Olympus, and moved on to Berkeley’s eucalyptus grove, where he took over Cal’s men’s heavyweight program three years ago. And then the request came from national coach Tim McLaren after this summer’s World Championships.

How would Teti feel about picking up the megaphone again and working with the men’s eight during the lead-up to the 2012 London Olympics?

This is no ordinary Olympic year. The Americans, who haven’t come close to winning a global medal since they made the podium in Beijing in 2008, finished eighth at last month’s regatta in Slovenia and failed to secure a spot at the Games. If they don’t win the last-chance qualifier in Switzerland in May, the Yanks will miss the marquee event for the first time in five-ringed history.

That would be unthinkable for a country that won the gold medal at every Olympics from 1920 through 1956, using college crews exclusively. So the call went out to Teti, the first coach to direct the US eight to the medal stand at successive Games since Cal’s Ky Ebright in 1928 and 1932.

“From my perspective, Mike’s one of the best eights coaches in the world,’’ said McLaren. “To have him on board is only a positive.’’

Nobody who has pulled an oar will dispute Teti’s credentials. He was the first person to be enshrined in the National Rowing Hall of Fame as both a coach and athlete. His US eights won seven world medals, four of them gold. He went to a school - St. Joseph’s in Philadelphia - that is far better known for basketball than rowing, yet he made a dozen national teams, earned a world title, and was bowman of the 1988 crew that won the first Olympic medal against a full field since 1972.

Who better to jump-start the eight?

“Hopefully, we can get this boat qualified and go from there,’’ said Teti, who was back pulling an oar yesterday in the Head of the Charles for his annual reunion row with his 87 Gold seatmates, who finished sixth in the master eights event without a practice run.

What makes this assignment different is that Teti already has a full-time job with a high-powered collegiate program and that he won’t be the main man.

“I’m very conscious that Tim’s the head coach,’’ he said. “What I didn’t want to be was the outgoing coach who was some kind of imposing figure in the background.’’

Getting everybody on the same page traditionally has been a challenge for a federation notorious for intramural splashing and clashing and whose athletes have been known to sue for a place on the Olympic team.

So the online chatter among rowing folks has been along predictable lines. Will the four, which hasn’t medaled at the Games since 1992, still be the priority boat? Will Teti get to choose the eight? What if he and McLaren want the same guys?

Ideally, everything works smoothly. Teti comes up with an eight that not only can qualify for the Games but can challenge for a medal. And McLaren puts together a four that can make the podium, which it nearly did last month.

“There’s still enough talent for the eight where it can be a pretty good boat,’’ reckoned Teti.

Pretty good once might have been good enough, but Teti’s last two Olympic boats have elevated expectations. And no matter how well the four does, the focus always will be on the big boat.

“In Americans’ minds, the eight is always a priority,’’ McLaren acknowledged.

The eight’s failure to earn a spot in Slovenia, despite the presence of the engine room from the Beijing lineup (Josh Inman, Steve Coppola, and Dan Walsh), made things that much more difficult. Besides having to spend money to send a boat to Switzerland, the federation will have to choose the eight earlier than it normally would. And as Teti learned to his dismay in 2000 when the four had to qualify, the eight that goes to Lucerne is the one that has to row in London.

If Teti can put together the right combination, the United States should be able to prevail against a field that will include the likes of the Czech Republic, New Zealand, China, and France.

What will be impossible is for Teti to be in two places at once.

Cal’s season will be underway when the selection process reaches crunch time. Right after the Pac-10 championships in mid-May, Teti needs to be in Lucerne for the Olympic qualifier. Then he has to be back a week later for the IRA championships in New Jersey, where his varsity will try to reclaim its title from archrival Washington, whom the Bears also will try to dethrone in this afternoon’s championship event.

“I do have experience with that,’’ said Teti, who was coaching both the US lightweight four and the Princeton freshman heavies in 1996. “It was a similar situation. [Head coach Curtis] Jordan and I tag-teamed and it all worked out. The lightweight four won a medal and Princeton swept the IRAs. I have high-quality assistant coaches here who can help.’’

If the eight makes it to the Games, Teti will have all the time he needs to get it tuned up for the Germans, British, and Canadians. If the Americans can collect a third straight medal, which they haven’t managed since 1956, their post-Beijing slump won’t matter.

“I don’t think anyone will remember the performance of the eight the last three years,’’ Teti said. “I think everyone will have amnesia.’’

It worked the other way in 2000 when the boat finished fifth in Sydney after coming in as three-time defending world titlists. “Nobody remembered any of the good stuff that happened the previous three years,’’ Teti observed.

If the big boat is among the missing in London, that would be the rowing equivalent of the US men’s basketball team staying home. Unprecedented and unacceptable. But Teti says he doesn’t feel the squeeze.

What were the odds of a St. Joe’s Hawk becoming a fixture in world-class boats for more than a decade? The way Teti sees it, pressure is overridden by opportunity. Until his 2004 bunch dashed away from the Dutch, Australians, Germans, and Canadians, no American eight had won at Olympus since 1964.

If the United States even makes the podium in London, it’ll be the sport’s comeback story of the year. So the opportunity is worth some calendar-juggling next spring.

If nothing else, the man can multi-task. Besides rowing and coaching here this weekend, Teti will be looking for any strapping Olympic candidate that may have been overlooked.

“I’ll be making the rounds at the Head, trying to find a diamond in the rough,’’ he said. “Just like the old days.’’